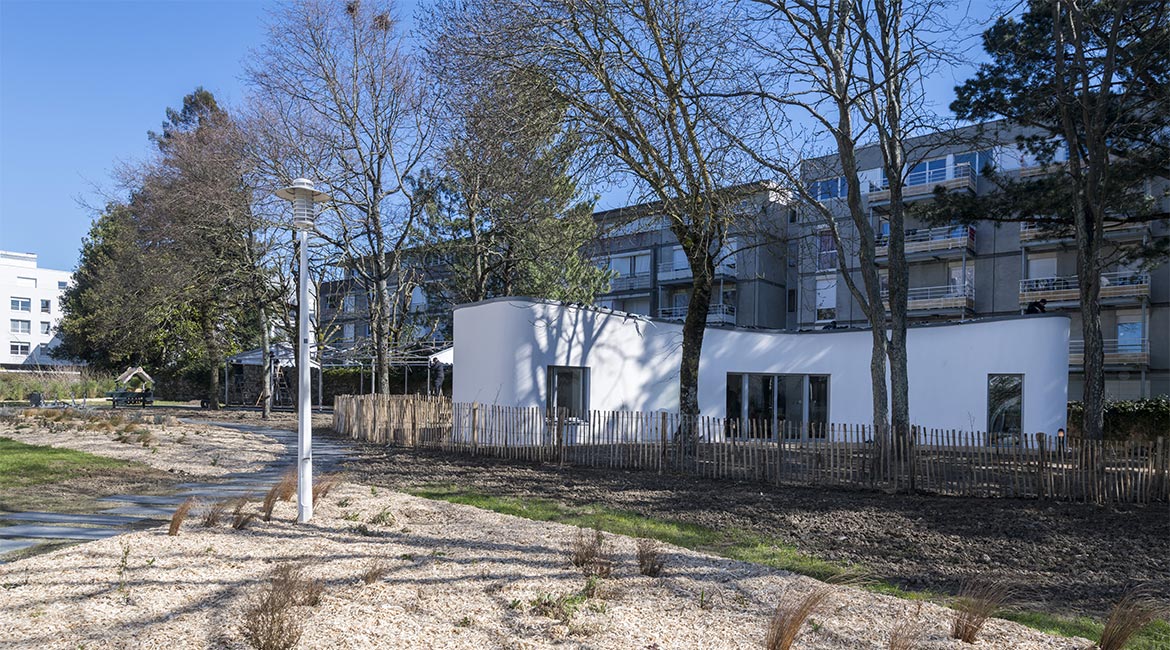 The header image is from the Yhnova press kit, source.

In July 2018, a family of five settled in their new home in Nantes, France. This event was far from trivial. In fact, it was a first worldwide: living in 3D-printed social housing. Is the affordable real estate sector entering a new era after prefab architecture? The two approaches use almost the same logistics, as structural elements are manufactured off-site. In addition, XL 3D printing allows greater formal freedom to industrialized and affordable architecture while reducing the home’s environmental impact.

The house in Nantes, measuring 95 sq. m, was named Yhnova. It has five rooms and is characterized by its organic design and clean lines. Designed as part of the BatiPrint3DTM project, construction began during the Nantes Digital Week in September 2017. Several university and government partners, including the Laboratory of Digital Sciences of Nantes, LS2N  (University of Nantes, CNRS, Ecole Centrale, Inria, IMT Atlantique) and the Research Institute in Civil Engineering and Mechanics, GeM (University of Nantes, CNRS, Ecole Centrale) launched this experiment to offer “housing that is affordable, adaptable to the terrain, quickly built and energy efficient,” according to their website.

BatiPrint3DTM is also the name of a design and construction technology sitting at the crossroads of civil engineering and robotics. In addition to the speed and precision in constructing the walls, 3D printing helped create an energy-positive habitat at a lower cost. In this regard, the team estimates that the walls will contribute to “heat savings of around 50%.” What is more, the house cost “approximately 200,000 euros, 20% less than a similar sized construction, built in a conventional manner,” according to an article in Business Insider.

The walls were built inside a hangar. A polyarticulated robot layered a triple-wall insulating and structuring formwork, creating the external walls of the house. The walls consist of two layers of polyurethane foam serving as formwork to a third layer of concrete. The expansive foam provides internal and external thermal insulation. The robotic printer operates with the additive manufacturing method and the material extrusion process.

Two steps made it possible to build a digital model of the house. The first was to draw the geometric representation of the architecture. This work was done by the TICA architectural firm. Thanks to the technical features of BatiPrint3DTM, the creators were able to play around with the inside-outside relationship, offering a view of the landscape without disrupting the wooded area. “The rooms of the home actually span between the trees, at a sufficient distance to preserve the root network, and are interconnected by long curved walls defining a large central living space open to the wooded area,” says TICA architect Charles Coiffier. 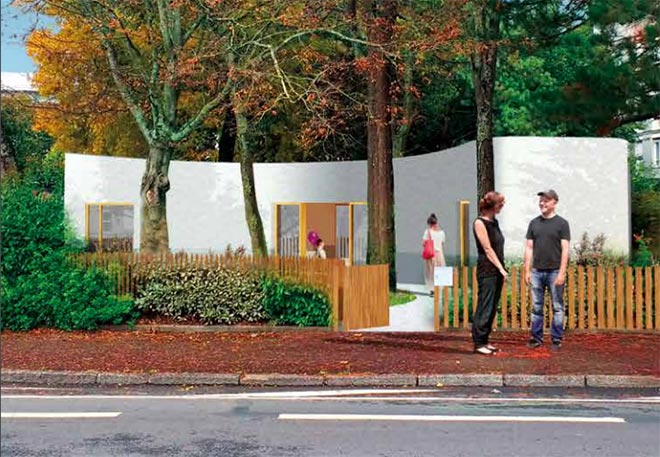 The second step was to design a digital model called Building Information Modeling (BIM). The model “brings together all the functional and physical characteristics of the house,” as shown in the following video  (in French only). BIM “allows researchers to define the robot commands and trajectories”.

During construction, the printer was moving along the slab of the construction shelter following a laser sensor connected to the BIM mode. The printing process lasted 54 hours. The team then spent four months completing the roof construction and installing doors and windows. Yhnova is equipped with home automation technologies and detectors to evaluate and analyze the behaviour of the materials, and thermal and acoustic quality during the first year of occupation.

In addition to monitoring, the scientific project will continue experimenting with other constraints. In fact, LS2N and GeM wish to explore new avenues by adapting the BatiPrint3DTM technology to the construction of two-storey habitats, the use of biobased materials, etc.