What about 4D printing? - By : Substance,

What about 4D printing? 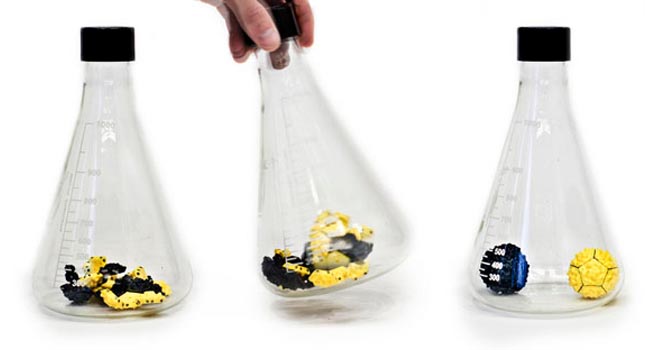 Doing 3D printing of parts with a 3D printer is something. Printing parts in 3D which will then assemble themselves is something completely revolutionary. Skylar Tibbits, an architect and computer scientist, is the Director of the Self-Assembly Lab at MIT, USA. In this lab, designers, scientists and engineers conduct research to create self-assembly technologies aimed at reimagining the processes of construction, manufacturing, and infrastructure in the built environment. With some partners and sponsors, they are inventing 4D printing.

[blockquote]”Programmable Matter is the science, engineering and design of physical matter that has the ability to change form and/or function in a programmable fashion. 4D Printing, where the 4th dimension is time, is one recent example of PM that allows objects to be printed and self-transform in shape and material property when submerged in water.” [/blockquote]

[blockquote]”Self-Assembly is a process by which disordered parts build an ordered structure through only local interaction. In self-assembling systems, individual parts move towards a final state, whereas in self-organizing systems, components move between multiple states, oscillate and may never come to rest in a final configuration.”[/blockquote]

How does it work? They use materials for which they know how they will react to energy sources like water and heat. They control their reaction and other variables so they could «make themselves» in the programmed forms. They also create parts with pieces of materials with specific links and embedded magnets. Shaking them will make them assemble themselves, like in this self-assembly line.

Could they code algorithms to do more complex form? They think it could be feasible. Research is going on. We could ask ourselves what the future might look like with 4D printing?

Manufacturing is understandable, but what about DNA?

Skylar Tibbits thinks 4D printing that will allow all kinds of structures and micro, macro and nano parts to assemble themselves and modify their organizations automatically, represent the next manufacturing revolution.

Do you think like him that 4D printing represents the next manufacturing revolution?