More than 2,000 participants took up the challenge presented by the 2015 international edition of the 24 Hours of Innovation: 25 sites in 17 countries on 4 continents! This event took place with a new management system based on the YouTube platform, which wonderfully worked. Ten thousand dollars in prizes were awarded to the winning teams.

The event is reviewed by Substance ÉTS in this article in text, images and videos. Take note that the next edition of the 24 Hours of Innovation 2016 will be the 24th and 25th of May 2016, in line with the C2 Montreal event!

The 2015 international edition of the 24 Hours of Innovation has enabled more than 2,000 participants worldwide to create innovative solutions to 20 technological challenges offered by participating companies and researchers from École de technologie supérieure (ÉTS) of Montreal (PDF).

Participants were from all corners of the planet and located on 4 continents:

It was our best international edition of the 24 Hours of Innovation so far! Thank you to all our participants, site organizers and the 24 hours of innovation organizing team!

Each of the 25 sites chose the three best projects submitted to their local site. The 25 winning projects were then submitted to the Montreal organization to be evaluated by an international jury at 9 am Montreal local time on May 27th, 2015. A total of twenty-five 2-minutes videos were evaluated by a team of 6 judges composed of professors from McGill University, Polytechnique School of Montreal and University of Quebec in Montreal and representatives of Montreal city, Smart and digital City Office, the Fédération des Caisses Desjardins du Québec and École de l’innovation citoyenne under the direction of Professor Mickaël Gardoni, the head of this event. The judges used an evaluation grid previously shared with all participants. 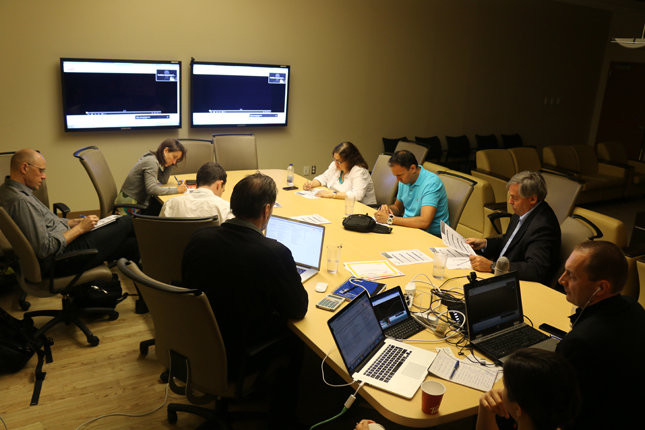 A total of $ 10,000 was awarded in prizes to the following winners:

First place was awarded to the team “Solucion Group” from Universidad Nacional del Sur,  Argentina. Here is the winning video of their solution to the challenge # 11, “Drones Exchanges”:

A team of 10 participants of this university took away the honors in this competition. They were 18 groups with more than 100 students participating at the 24 hours of innovation in 2015 at this site.

As we stated in the article “A Creativity Guide for Short Ideation Sessions”,  the number of participants is of great importance when the duration of the ideation session is short.

For more information about their innovative solution, you’re invited to visit their site.

The team “RealPlayer +” of the École d’ingénieurs généraliste en haute technologie (ISEN) in France was awarded the second place with this video of their solution to the challenge # 9, “Immersive Fan Experience”:

Here are some photos of the winning team and site participants from ISEN: 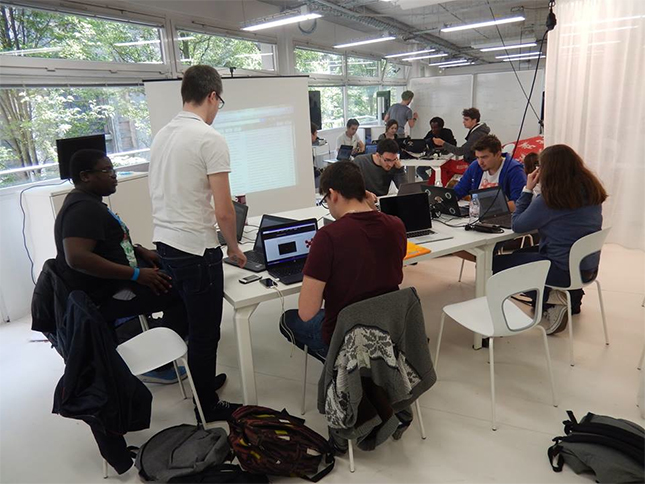 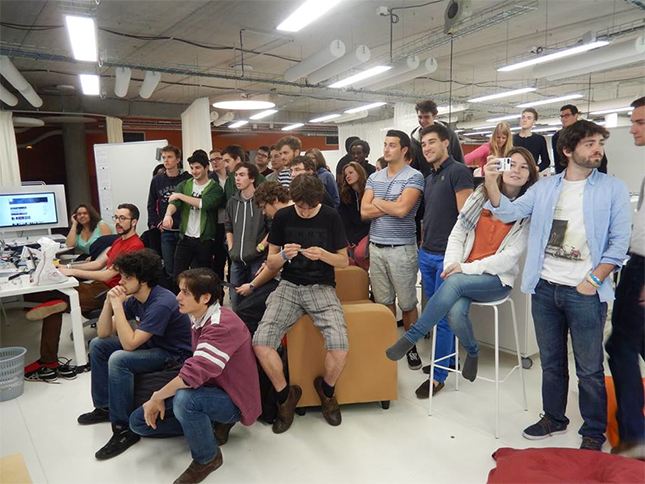 Clearly, Argentina have no shortage of talent: Following the first place, another University of Argentina earned the third position. The team “Éco Urbe” from Universidad Nacional De la Plata won with this video of their solution to the challenge # 6, “Eco-Friendly Energy”:

Below you can find pictures of the winning team and the joy they had finishing in the top three! 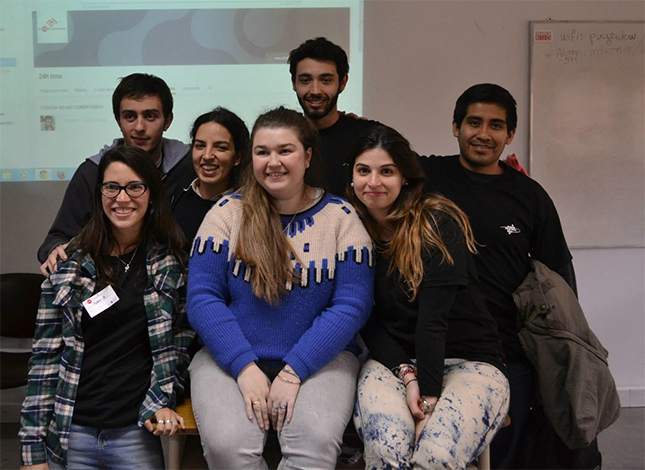 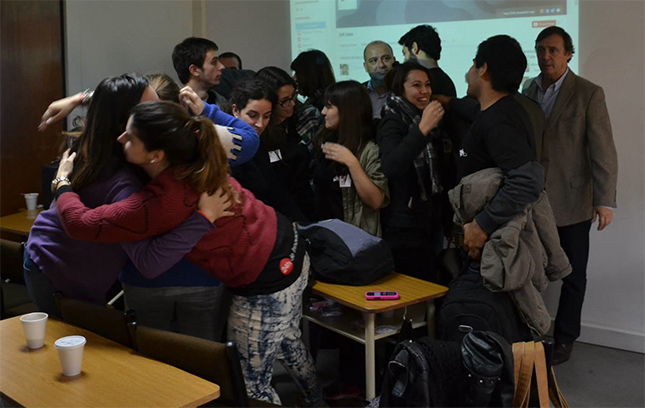 The team of 24 Hours of Innovation 2015 also rewarded the regional winners by awarding the following prizes:

Team “TD” of Universidad Veracruzana, Mexico won the regional award “North America” with this video of their solution to the challenge #6, “Eco-Friendly Energy”:

Attached is a video demonstrating the extent of the university involvement in this competition which brought together for this event 50 students and 20 professors:

Team “Dinamo” of Universidad de la República, Uruguay won this prize. They were located on the site of Antel, a company regularly providing challenges to this competition, with the following video of their solution to the challenge # 10, “Low Cost Prosthetics”:

Here are some pictures of the Antel site where 16 teams took part in the 24 Hours of Innovation 2015:

This 9 participants team  (shown below) was part of a group of 94 participants from UTT, EPF, IUT and ESC (Graduate School of Design), who participated in the 24 Hours of innovation 2015 from the site of UTT: 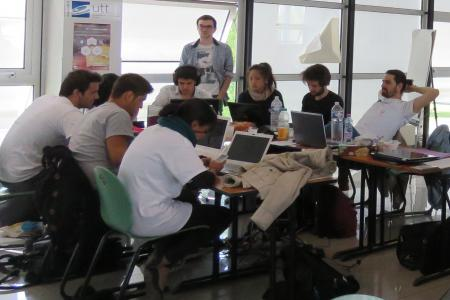 Well, 24 continuous hours added to the jet lag (it started at 9h AM in Montreal) is exhausting! 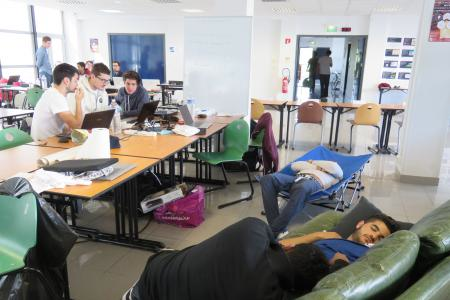 Here are photos of the winning team and the 9 teams who participated in the 24 Hours of Innovation in 2015 at the UMBB site: 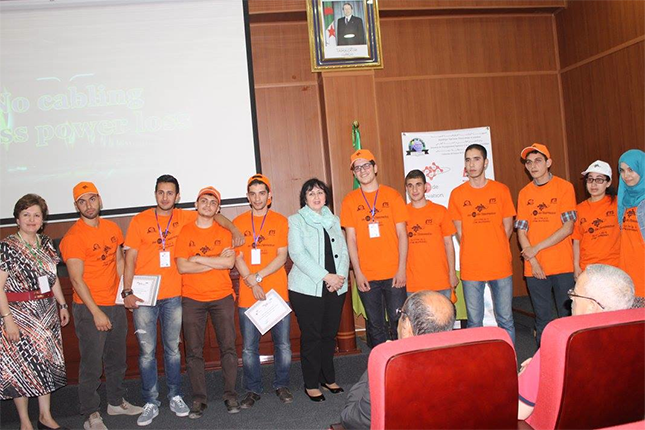 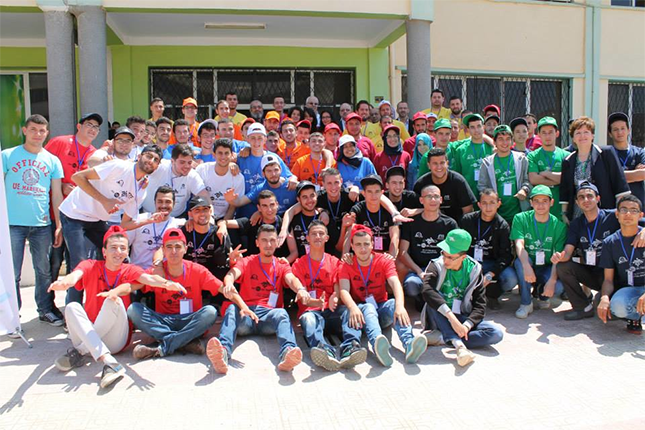 Asia Prize was won by “BrainHole” team from Shanghai University for their innovative solution to the challenge #11, “Drones Exchanges”:

A SWAT TEAM is a team that accepts not to choose a project, but rather to seek an innovative solution to a project that is imposed to them. This separate team category was created to ensure that all submitted projects by companies and researchers can at least be chosen by one team during the 24 Hours of Innovation 2015. To reward participants who agree to have a project imposed (which is quite a challenge!), 3 prizes were awarded to the top SWAT TEAMS.

Eighty participants took up the challenge of the 24 Hours of Innovation from the ESIPE. Here are pictures of the winning team and the participants: 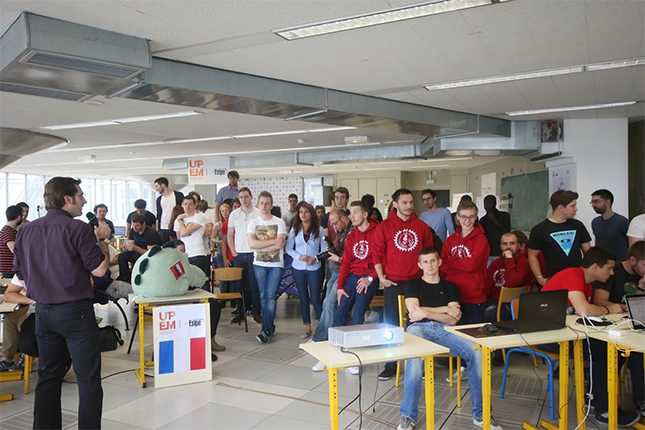 Team “Uide” from Yachay University, Ecuador, won the second prize for their proposed innovative solution to the challenge # 15, “Eco-friendly + Ramification”:

A total of 12 teams from Yachay participated to the 24 Hours of Innovation 2015. Here are some pictures taken on this site during the competition: 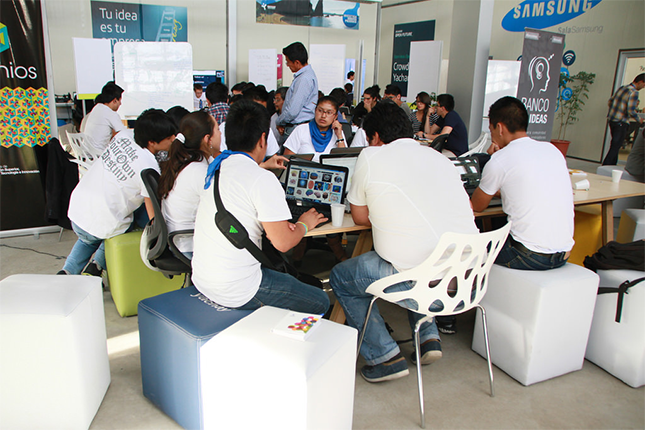 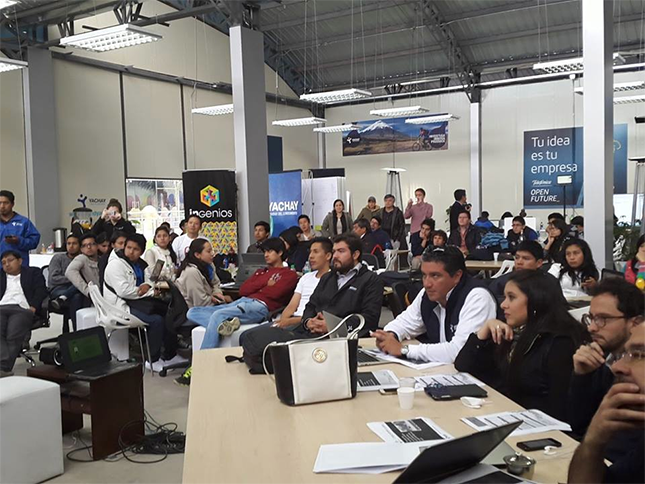 A second team of Yachai won the third place: Team “EnerMe” with 4 participants who created the following innovative solution to the challenge # 5, “App for an Idea Bank”:

We were delighted to welcome the team of coordinators and experts from the Office of Smart and digital City Office of the city of Montreal, who came to provide support and information to local and international teams of the 2015 – 24 Hours of Innovation challenge # 16, “Available Parking in the City”.

For the third consecutive year, we were pleased to receive girls and guys teams of Collège Ste-Anne from Lachine, Quebec. Thank you for your unswerving participation! 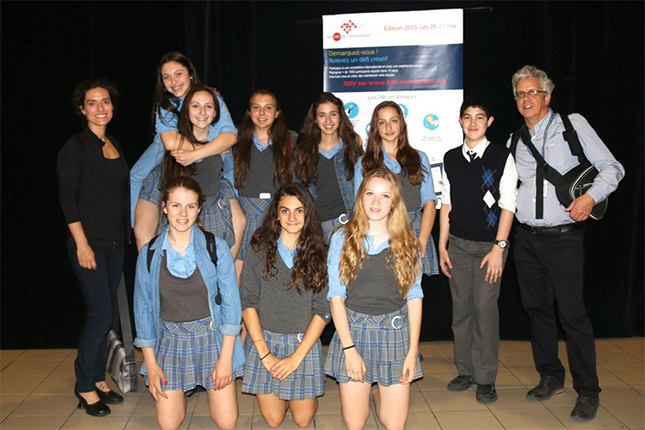 And what a great creative way to enable participants to rest during the 24 Hours competition in a tent specially equipped for this event! It is at Yachay in Ecuador that we must be in 2016 to live this wonderful experience! 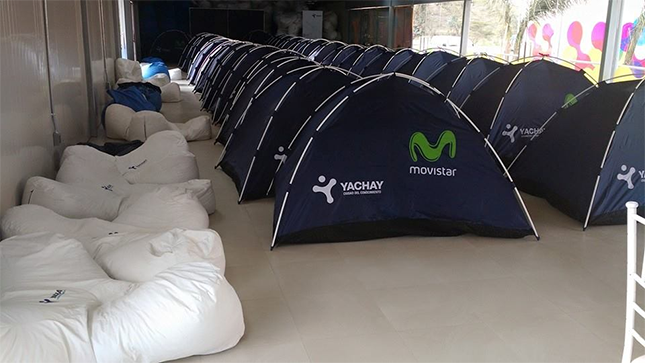 Twenty-eight participants from the 24 Hours of the Innovation – 2015 edition from China, Singapore, Germany, Mexico, Ecuador, United States and Canada will carry on their adventure with the first edition of the International Summer School on Innovation and Technological Design at ÉTS from July 6th to July 31st, 2015. 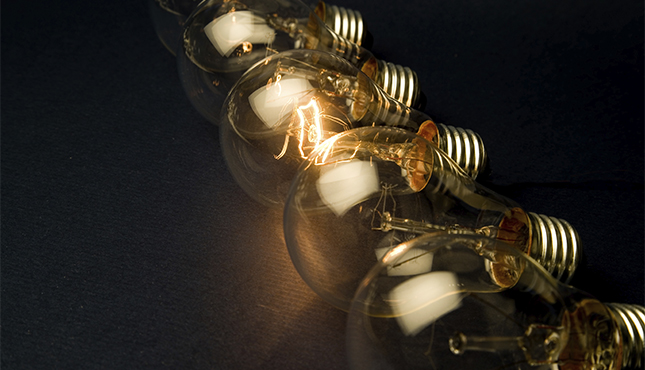 Participants will resume the process of creation again, this time using the latest creative methodologies, “design thinking” and fast prototyping that will lead them to “live” the demanding innovation process.  We also added experimentation in the educational approach: “MIT Fab Lab”, “Living Lab” and open innovation while addressing business plans notions with “Business Model Generation” type, socio-financing and several other topics. Those are “Must skills” to acquire to stand out in the field of innovation. There will be plenty of prototyping and creative iterations during this month of July 2015.

We have the chance to welcome Professor Guy André Boy from Florida Institute of Technology and director of NASA Human Health and Performance Center  who will share his knowledge for a week with our participants and our professors.

Have you missed this 2015 Summer School edition? Follow our news on Substance ÉTS to learn when will be the next edition of the Summer School!