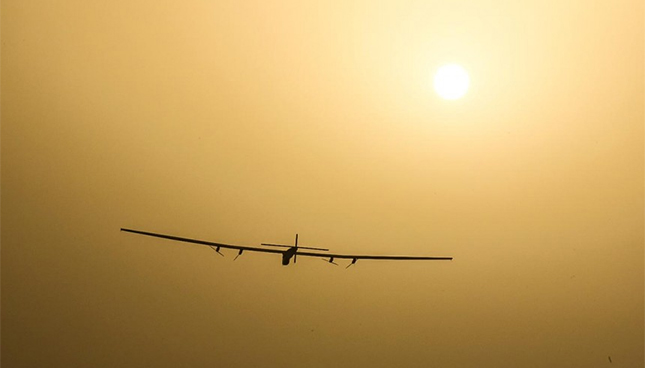 The solar plane “Solar Impulse 2” will attempt to achieve what no other airplane has never dared: Do the first round-the-world solar flight without taking a single drop of fuel! A feat that two sky adventurers prepared during twelve years. This world tour began March 9, 2015 and will end between late July and early August 2015. We will follow for you and with you on Substance ETS, this extraordinary odyssey they will try to do at the risk of their lives.

The Swiss pilot André Borschberg and his compatriot Bertrand Piccard will alternately pilot their solar plane Solar Impulse 2 to fly around the world. This aircraft, which they have devoted 12 years of research, will fly without fuel. Made of carbon fiber, it has a 72 meter wingspan (236 ft), larger than that of the Boeing 747-8I. 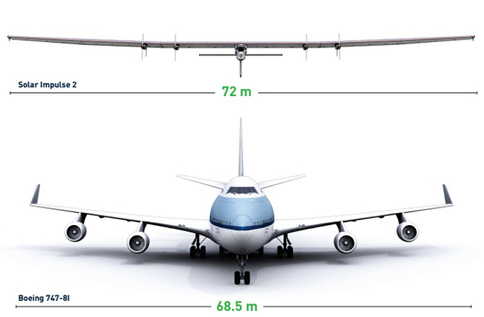 The 17,248 photovoltaic solar cells of the plane will transform the sun’s energy into electrical energy, which will accumulate in lithium-ion batteries. These batteries power four electric motors propeller that will allow the aircraft to travel at a speed between 50 and 100 km/h (31 to 62 miles/h) at an altitude of 8,500 meters (27,900 feet).

Browse 35,000 km (22,000 miles) to go around the world at this speed will require five months (in 12 steps to change pilot), an expedition that has never been done by any solar plane. For its maiden flight, the Solar Impulse 2 left Abu Dhabi, capital of the United Arab Emirates (UAE), to land in Muscat, capital of Oman, after 13 hours and 2 minutes of flight. Note that this departure city was not chosen at random: the UAE is considered the largest oil producer and exporter in the world.

The hardest thing for these two sky adventurers will be to cross the Atlantic and Pacific oceans, forcing the pilot to spend five days and five nights over the sea in the cramped Solar Impulse 2 cabin of 3,8 m3 (134,2 ft3). 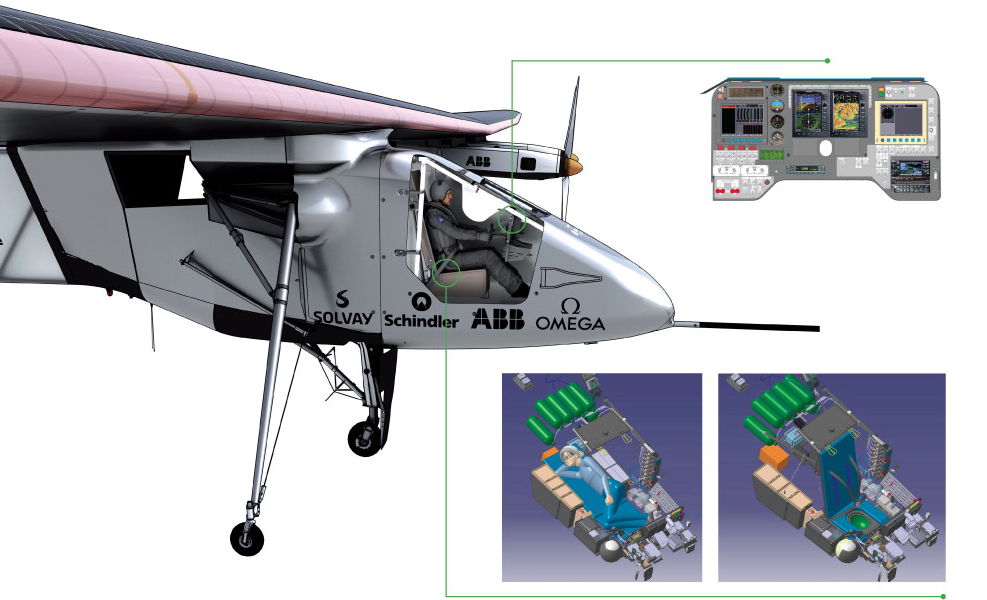 In an interview on the morning show “Salut Bonjour” (Hi – good morning) of the TVA television network (Montreal, Canada) done March 10, 2015, Professor Daniel Rousse from École de technologie supérieure (ÉTS) in Montreal commented this event, which currently, captures the attention of the media in the world. For Professor Rousse, this technological feat is an “important symbol.” He points out that fossil energy resources atrophy without an implantation rate of renewable energy able to offset these declining fossil reserves. The world is heading for a serious problem. Therefore, “to see such technology demonstration […] sensitizes people to think that we can almost do miracles with solar energy.” To see the full interview of Professor Rousse, we invite you to watch the video of his interview (in french only).

According to the site info.solarimpulse.com, the route will be the following:

“Solar Impulse 2 will take-off from Abu Dhabi, capital of the United Arab Emirates, in late February or early March and return by late July or early August 2015. The route includes stops in Muscat, Oman; Ahmedabad and Varanasi, India; Mandalay, Myanmar; and Chongqing and Nanjing, China. After crossing the Pacific Ocean via Hawaii, Solar Impulse 2 will fly across the Continental U.S.A. stopping in three locations – Phoenix, and New York City at JFK. A location in the Midwest will be decided dependent on weather conditions. After crossing the Atlantic, the final legs include a stop-over in Southern Europe or North Africa before arriving back in Abu Dhabi.”