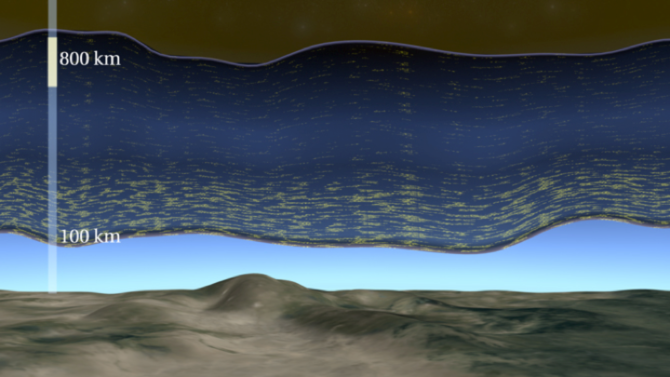 The ionosphere is a region of the upper atmosphere, from about 85 km (53 mi) to 600 km (370 mi) altitude, and includes the thermosphere and parts of the mesosphere and exosphere. Picture source : NASA.

The ionosphere is the band of atmosphere extending from about 50 to 1000 kilometres above the earth’s surface. In this layer the sun’s ultraviolet radiation ionises gas molecules which then lose an electron. These free electrons in the ionosphere influence the propagation of microwave signals (speed, direction and polarisation) as they pass through the layer. The largest effect is on the speed of the signal, and hence the ionosphere primarily affects the measured range [2]. The satellite ephemeris bias is the discrepancy between the true position (and velocity) of a satellite and its known value. This discrepancy can be parameterised in a number of ways, but a common way is via the three orbit components: alongtrack, crosstrack and radial. In the case of GPS satellites the alongtrack component is the one with the largest error [3].

There are two satellite signals currently broadcasted by the U.S. WAAS system: one on L1 and another on L5 (see table 1 beside).This paper presents an overall assessment of the WAAS L1 and L5 signals quality and impacts on the navigation solution robustness by quantifying the contributions of each broadcasted differential correction.

The WAAS is a Satellite Based Augmentation System (SBAS) for North America that augments GPS SPS by broadcasting differential GPS (DGPS) correction messages from GEO satellites. The WAAS Service provides augmentation of GPS integrity via integrity data included on the WAAS message broadcasts. 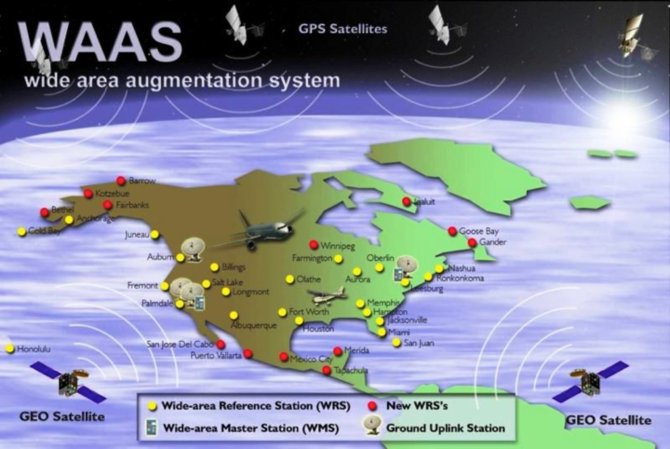 The WAAS Service is specifically designed to meet high accuracy, integrity, continuity, availability standards of aviation users, but is an open service that has the capability to support other applications as well. WAAS provides a ranging function throughout the entire satellite footprint that improves the availability of GPS positioning for SBAS users. WAAS also provides differential corrections as well as satellite status for GPS satellites [4].

This research is undertaken due to the scarcity of available publications on this important research topic. In this perspective, a study of the WAAS signals characteristics was first carried out. The information gathered was then used to compare various GPS solutions in terms of frequency diversity, satellite diversity, pseudorange noise and different signal corrections and their impacts. These solutions are compared against a reference standalone GPS solution. All statistics are computed with respect to a post-processed Novatel Waypoint Real-Time Kinematics (RTK) GPS L1/L2 semi-codeless static solution, considered as the reference. A discussion on some simplifications with respect to specifications that could be considered by receiver manufacturers closes the paper.

It has been confirmed that WAAS navigation messages are identical on both satellite frequencies, at the time the experiments were conducted (i.e. 2012) and that on top of different spreading codes and rates, WAAS L5 uses Manchester coding to avoid data ambiguity. It was also demonstrated that the broadcasted information was strongly correlated from one satellite to another and offered similar positioning performances, assuming the same tracking conditions.

For single frequency receivers, WAAS L1 provides a 50 % error reduction, distributed over the ionospheric, slow and fast corrections in a decreasing order of magnitude. A greater impact of WAAS corrections was noticed during the day, although WAAS corrections are still beneficial during the night, due to slow and fast corrections being required all around the clock. Hence, even if mobile devices may need to rationalize their power consumption, a single WAAS channel should be kept active at all times, although a reduced set of features could be envisioned.

The results presented herein should remain valid until the year 2020. By then, all GPS satellites should broadcast the GPS L5 and new L1C MBOC civil signals, while the GALILEO constellation, providing E1 MBOC and E5a signals among others, should be fully operational. WAAS L5 should then be updated to better support these new signals, hopefully preserving frequency diversity.

Marc-Antoine Fortin is pursuing his Ph.D. at ÉTS in the field of Global Navigation Satellite System (GNSS) and receivers robustness. He previously completed an Electrical Engineering Master's degree from École Polytechnique in 2005.

Jean-Christophe Guay holds a Bachelor’s degree and a Master’s degree in Electrical Engineering from ÉTS. As part of his Master’s degree project, he has mainly integrated the SBAS capabilities in a FPGA-based GNSS receiver.