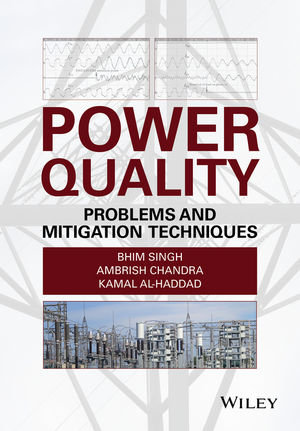 The term electric power quality (PQ) is generally used to assess and to maintain the good quality of power at the level of generation, transmission, distribution, and utilization of AC electrical power. Since the pollution of electric power supply systems is much severe at the utilization level, it is important to study at the terminals of end users in distribution systems.

There are a number of reasons for the pollution of the AC supply systems:

A number of customer’s equipment also pollute the supply system as they draw nonsinusoidal current and behave as nonlinear loads. Therefore, power quality is quantified in terms of voltage, current, or frequency deviation of the supply system, which may result in failure or mal-operation of customer’s equipment. Typically, some power quality problems related to the voltage at the point of common coupling (PCC) where various loads are connected are the presence of voltage harmonics, surge, spikes, notches, sag/dip, swell, unbalance, fluctuations, glitches, flickers, outages, and so on. These problems are present in the supply system due to various disturbances in the system or due to the presence of various nonlinear loads such as furnaces, uninterruptible power supplies (UPSs), and adjustable speed drives (ASDs). However, some power quality problems related to the current drawn from the AC mains are poor power factor, reactive power burden, harmonic currents, unbalanced currents, and an excessive neutral current in polyphase systems due to unbalancing and harmonic currents generated by some nonlinear loads.

These power quality problems cause failure of capacitor banks, increased losses in the distribution system and electric machines, noise, vibrations, overvoltages and excessive current due to resonance, negative- sequence currents in generators and motors, especially rotor heating, derating of cables, dielectric break- down, interference with communication systems, signal interference and relay and breaker malfunctions, false metering, interferences to the motor controllers and digital controllers, and so on.

Because of these problems, power quality has become an important area of study in electrical engineering, especially in electric distribution and utilization systems. It has created a great challenge to both the electric utilities and the manufacturers. Utilities must supply consumers with good quality power for operating their equipment satisfactorily, and manufacturers must develop their electric equipment either to be immune to such disturbances or to override them. A number of techniques have evolved for the mitigation of these problems either in existing systems or in equipment to be developed in the near future. It has resulted in a new direction of research and development (R&D) activities for the design and development engineers working in the fields of power electronics, power systems, electric drives, digital signal processing, and sensors. It has changed the scenario of power electronics as most of the equipment using power converters at the front end need modifications in view of these newly visualized requirements. Moreover, some of the well-developed converters are becoming obsolete and better substitutes are required. It has created the need for evolving a large number of circuit configurations of front-end converters for very specific and particular applications. Apart from these issues, a number of standards and benchmarks are developed by various organizations such as IEEE (Institute of Electrical and Electronics Engineers) and IEC (International Electrotechnical Commission), which are enforced on the customers, utilities, and manufacturers to minimize or to eliminate the power quality problems.

The table of contents of the book is accessible at the following link.

To acquire this book, consult the global publishing company Wiley:

You could consult this book at ÉTS library:

You could also buy it at:

Ambrish Chandra is a professor in the Electrical Engineering Department at ÉTS. His research interests focus on the quality of voltage, power factor correction, control and integration of renewable energy sources.