Pierre Lachapelle Author profile
Pierre Lachapelle is a professor in the Department of Ophthalmology & Visual Sciences at McGill University. His research focuses on normal and pathological retinal function. 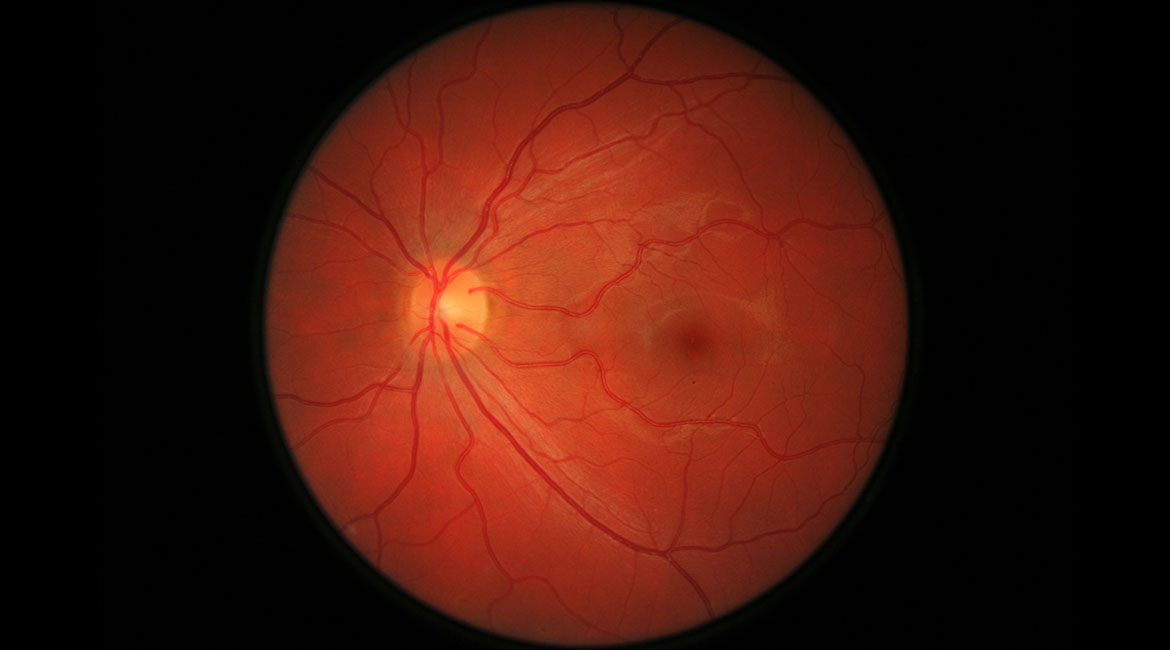 The electroretinogram is the only objective tool currently available to ophthalmologists to evaluate retinal function. Unfortunately, this electrical response only gives a global idea of the retinal function, without specifically localizing possible functional damage. In this paper, we present a new recording technique to reconstruct the topography of this function and localize possible retinal cell lesions or dysfunctions. This new imaging technique is designed to detect and better monitor several degenerative retinal diseases. Keywords Retina, Image reconstruction, Inverse problems, Electroretinogram, Multi-electrodes, Virtual electrodes

Purpose of the Electroretinogram

The first layer of cells that receives light and forwards it to the brain is called the retina. To objectively assess its function, clinicians can only rely on the electroretinogram (ERG), the electrical signal produced by the retina in response to a flash of light. To record the ERG, an active electrode is placed on or around the eye, a reference electrode on the temple and a grounding electrode on the forehead [1]. The subject is then positioned in front of a Ganzfeld, a device which stimulates the retina with flashes and in which the light is controlled.  Unfortunately, since this test is done with a single active electrode and a flash of light illuminating the whole retina, the recorded response can only give a global idea of the retinal function. It is therefore impossible to pinpoint the location on the retina where possible cell dysfunction could be present, limiting the diagnostic power of this clinical tool. Our study attempts to address this shortcoming by increasing the number of electrodes to reconstruct the retinal function topography.

Principle of the Multi-Angular Electroretinogram

Because the eye surface is small, we developed a new technique to record the ERG, which  virtually multiplies the number of electrodes while limiting the actual number placed around the eye, thus reducing the subject’s discomfort during examination. This is achieved through eye rotations. Each gaze position changes the relative position of the electrodes  with respect to the retina. This creates multiple virtual electrodes that record responses almost simultaneously, synchronized with the flash of light. Since this technique relies on different gaze angles, we named it the multi-angular ERG (or maERG). In total, only 3 real electrodes are placed around the eye. With 11 different gaze positions, we obtain 33 virtual electrodes recording 33 ERG signals. 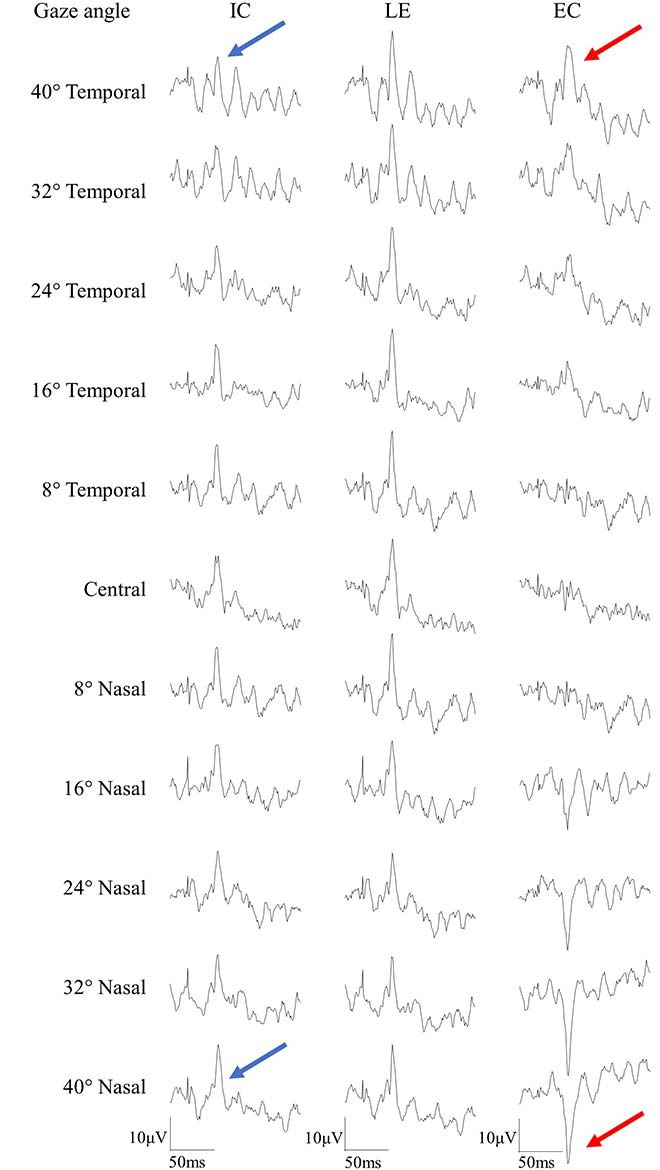 Fig. 1. Examples of 33 maERG recordings from a normal subject. 11 gaze positions are used, from 40° Temporal to 40° Nasal (from left to right), combined with 3 real electrodes, placed on the internal canthus (IC), the lower eyelid (LE), and the external canthus (EC). The blue and red arrows show the waveform changes with the gaze position changes.

By combining these 33 signals with an electroanatomical model of the eye, we can compute the functional topography of the retinal activity. This amounts to solve an inverse problem similar to what is done in neuroimaging (using the LORETA algorithm [2]). Thus, we produce  a map of retinal bioelectric activity that explains the recordings obtained from the virtual electrodes.

Fig. 2. Electrophysiological model of the eye, front and side views, with their different elements indicated on the right.

To assess the feasibility of our maERG technique, we simulated retinal pathologies by varying inactive areas (or scotomas) of different sizes and positions. In addition, we assessed the robustness of the reconstruction algorithm by  varying the signal-to-noise ratio on the measurments. 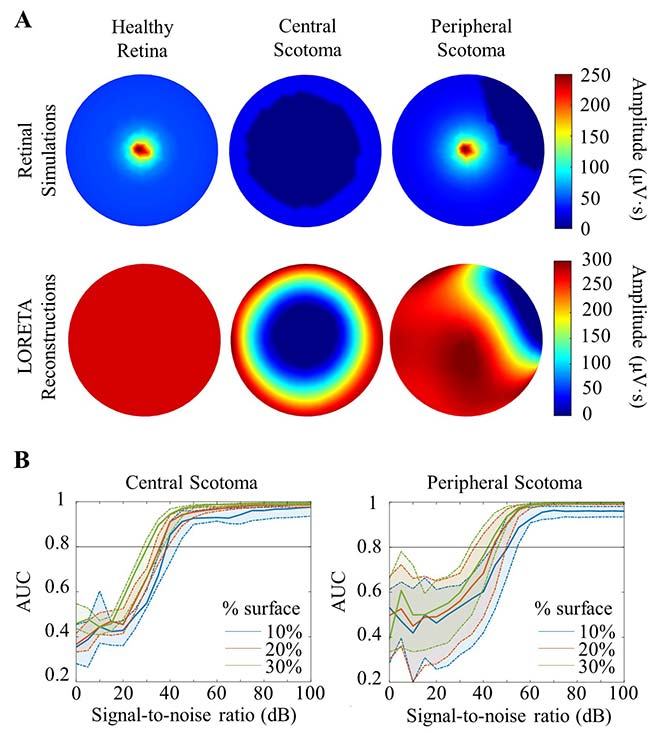 Fig. 3. (A) Representation of different retinal simulations with their reconstruction images presented below. (B) Area under the curve (AUC) of a ROC (Receiver Operating Characteristic; sensitivity/specificity curve) for each simulation of a signal-to-noise ratio, to determine the acceptable noise level in a model (must exceed an AUC of 0.8 to be considered valid).

Our simulations demonstrated a variation of the quality of the reconstruction according to the location and size of the scotoma, and the impact of a good signal-to-noise ratio.  Indeed, if the scotoma is central (in the macular region) and covers at least 10% of the retinal area, a ratio of at least 40 dB is required. For peripheral scotomas of the same size, a ratio of at least 55 dB is required to obtain a valid reconstruction. It is therefore easier to reconstruct the activity at the center of the retina than at the periphery.

Finally, we also checked which virtual electrode positions are the more useful. The original idea was to use 11 gaze positions on the same horizontal axis (from left to right), combined with 3 electrodes, 2 on the same horizontal axis and one lower, which gives us additional information on the vertical axis. Results of the simulations show that there must be electrodes along all axes, whether by placing an actual electrode on another axis (as in our original placement) or by also moving the gaze position on the vertical axis (from top to bottom).

This study presents for the first time how a non-invasive ERG recording technique can image the retinal activity over 180° to localize inactive or dysfunctional areas. The maERG opens a new area of diagnosis and monitoring of patients suffering from degenerative diseases by following the evolution of the affected areas throughout their visits. This is of particular importance to localize lesions that often begin in the periphery for many diseases, like glaucoma, the leading cause of blindness in the world.

Mercedes Gauthier is a PhD student in the Electrical Engineering Department at ÉTS. Her current research focuses on recording and processing electroretinogram data to improve its diagnostic efficiency.

Mathieu Gauvin is an Affiliate Professor in the Ophthalmology & Visual Sciences department at McGill University. He is also heading the R&D department at LASIK MD, conducting extensive research in over 40 private clinics.

Pierre Lachapelle is a professor in the Department of Ophthalmology & Visual Sciences at McGill University. His research focuses on normal and pathological retinal function.

Jean-Marc Lina is a professor in the Electrical Engineering Department at ÉTS. His research interests include neuro-imaging, complex wavelets, biomedical signal, signal processing and applications.

Looking at the Brain Function in Action… Remotely 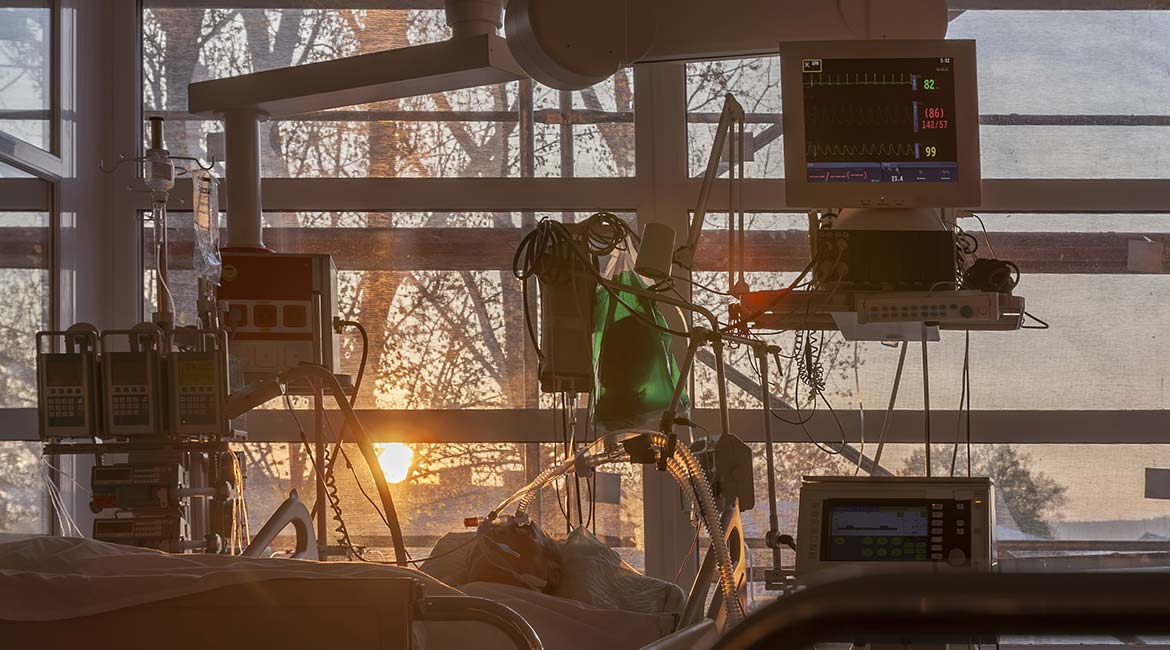 A Pathway to Personalized Medicine in Intensive Care Units