A Robot Directly Inspired by Water Striders - By : Substance, 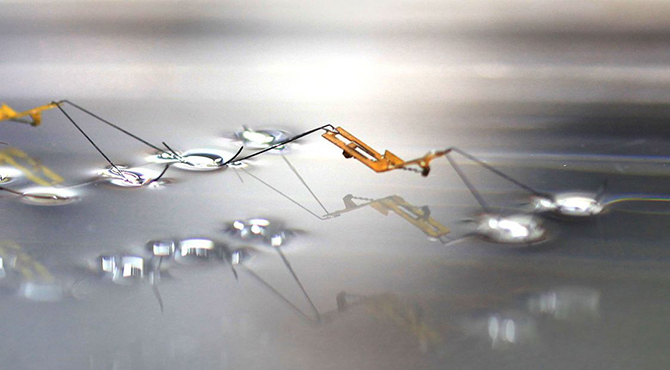 Researchers from Seoul National University and Harvard University joint forces to create a robotic insect inspired by the water striders, able to jump and land on an aquatic surface.

Helped by their hydrophobic legs, those insects use water’s superficial tension to take off without breaking the water surface. In their article published in Science, scientists explain that by analyzing high-speed videos, they discovered that in order to achieve jumping, their legs press water for an adequate period of time, up to a certain depth. The insects legs are then slightly curved and rotate at a very specific speed to provide enough momentum to propel themselves.

“This is due to their natural morphology,” said Kyu Jin Cho, PhD, Associate Professor at School of Mechanical and Aerospace Engineering, Seoul National University. “It is a form of embodied or physical intelligence, and we can learn from this kind of physical intelligence to build robots that are similarly capable of performing extreme maneuvers without highly–complex controls or artificial intelligence.

Several attempts were necessary to achieve a robotic insect, using a “torque reversal catapult mechanism”, reproducing the way a flea jumps, which allows it to apply a pressure up to 16 times its own body weight on the water. 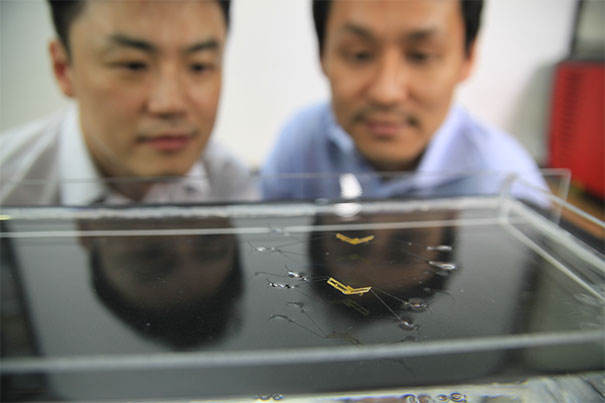 The team used the MEMS manufacturing technique (MEMS standing for Micro Electro-Mechanical Systems). It consists in superimposing different composite materials layers which were formerly laser-cut in order to get complex articulated mechanisms.

This international project gathered biologists and roboticists. It’s a true success in the nanotechnology and biomimetic areas, showing us how much we can still learn from nature  itself.