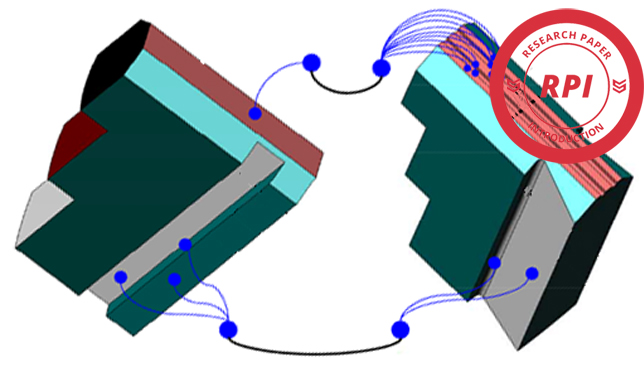 The complete definition of a product often requires the collaboration of various partners. Data sharing and exchange between partners has thus become an important task throughout a product’s entire life cycle. Even while subsets of the product definition are exchanged (as work packages) and modified by various partners, the global product definition must remain consistent. The research paper focuses on maintaining consistency between Computer-Aided Design (CAD) work packages and the global product digital mock-up (DMU). The approach is designed to ensure better management of the associations between objects when a work package is extracted from the global DMU, modified by a partner, sent back to the originator and then re-inserted into the global DMU, which must be modified in turn so as to maintain consistency (fig. 1).

Whatever the motivation behind the work package evolution, it is expressed through CAD object versions as modifications to geometry. The original object (O-Object) being sent from an original equipment manufacturer (OEM) to a partner as part of an iWP will differ from the next version of the object being returned (R-Object) to the OEM by the partner. Each R-Object is either an evolution of a previous version or it is a completely new version. The objective here is to associate, or to establish correspondence between entities that belong to the O- and R-Objects. We distinguish three cases. To simplify the discussion, objects are hereafter limited to faces. 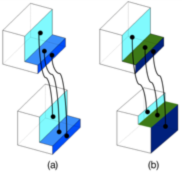 Case 1 – Valid associations: In this case, the matching between entities of the R-Object and those of the original O-Object is obvious if all the entities’ ID’s are preserved (fig. 2).

Case 2 – Partially undetermined associations: In this case, some entities are orphans upon first analysis. This occurs either because the number of entities differs between the O- and the R-Objects, or because some entities find no ‘trivial’ equivalent via geometric equivalence or ID persistence. The former happens when m entities of the O-Object are destroyed and replaced by n entities on the R-Object. (fig. 3) 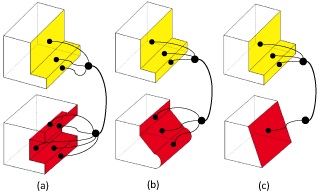 Case 3 – Undetermined associations: In this case, all entities’ IDs are destroyed and their cardinality may vary as well. This may occur when there is a passage through a neutral format or when the entire object is replaced by a new one. All constituting entities are therefore considered to be new. (fig. 4).

Figure 5 summarizes the three levels of complexity in reconciling associations and propagating changes, according to the work package change scenario. Recall that the objective is not to eliminate user intervention but rather to assist the user via a management model. 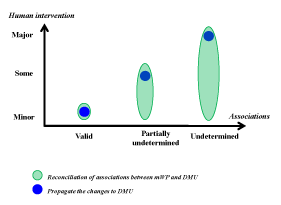 Fig. 5. Complexity of reinserting mWPs into the DMU in relation to the type of evolution scenario. Source [Img1] 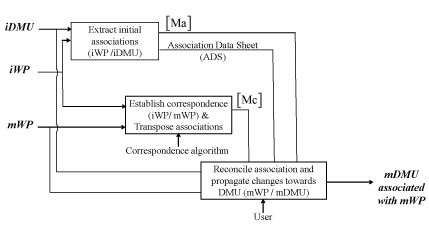 From Initial associations to Change propagation

Fig. 7. Full associations’ management cycle from the iDMU to the propagation of changes to the mDMU. Source [Img1]

The collaborative design process requires exchanging data between OEMs and partners who contribute to the evolution of product definition. Data must be reintegrated into the OEM DMU after modification by the partner. The steps of the collaborative process using the proposed Association Management Model (AMM) are summarized as follows (Fig. 8): 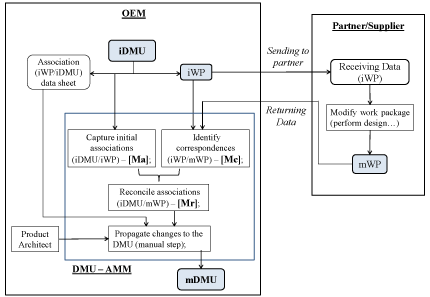 To illustrate and validate the DMU-AMM, a DMU made of a three-jaw chuck is considered (Fig. 9). The chuck itself belongs to a work package. The modification scenario covers two needs: 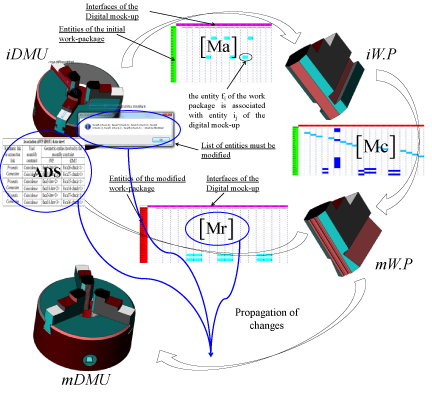 This work was performed within an industry-led research program called the Collaborative development for Product Lifecycle Management, which aims at developing a collaborative environment for better information management in the product development process while maintaining confidential data security.

To understand more about Maintaining Consistency between CAD Elements in Collaborative Design using Association Management and Propagation, we invite you to read the Research Paper available in the Journal « Computers in Industry » at the following link: