Where are We with the Famous Higgs Boson? - By : Darine Ameyed,

Where are We with the Famous Higgs Boson?

This second article on this famous Higgs boson where Pauline Gagnon, a researcher at CERN, allows us to learn a little more about her on this discovery and the result of this exciting research. We will learn about the Higgs boson, but also on dark matter, antimatter, and quark-gluon plasma (QGP).

Pauline Gagnon has been a Doctor of Particle Physics at the Indiana University and a researcher at the European Council for Nuclear Research (CERN) since 2000. She is one of the rare Quebecois researchers on the team working with the ATLAS detector, one of two detectors (the second being the CMS detector). Her team successfully identified the Higgs Boson: the “missing link” predicted by physics over 50 years ago but detected for the first time in 2012. 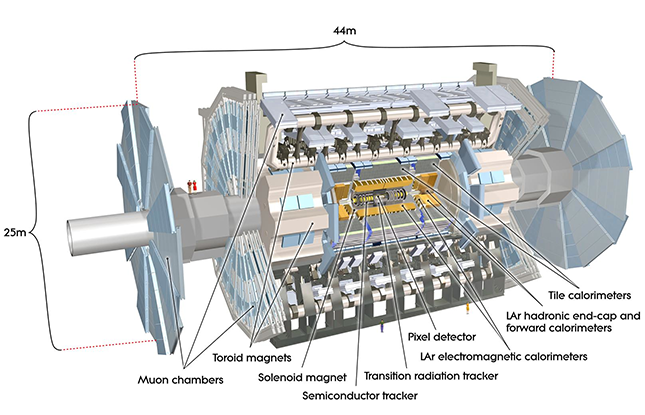 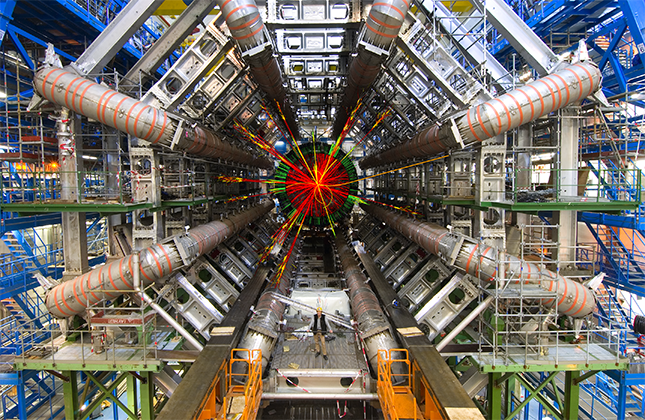 Fig. 2. “Black Hole” event superimposed over a classic image of the ATLAS detector.

She was in the right place, at the right time, to make this amazing discovery! After having participated as a researcher, she decided to dedicate herself to the mission of sharing this great scientific breakthrough with the public at large. As a member of the CERN communications group from 2011 to 2014, she has given many public lectures and media interviews, throughout the world, to explain her research and, in particular, this particular discovery.

On March 2, 2015, Pauline Gagnon was with us for a conference organised by Marlène Clisson, a professor at ÉTS, along with the ÉTS social club known as “Les INGénieuses”. The conference focussed on the fascinating Higgs Boson discovery which was also the main subject of Pauline Gagnon’s book “What Higgs Bosons Eat in the Winter and Other Essential Details.” 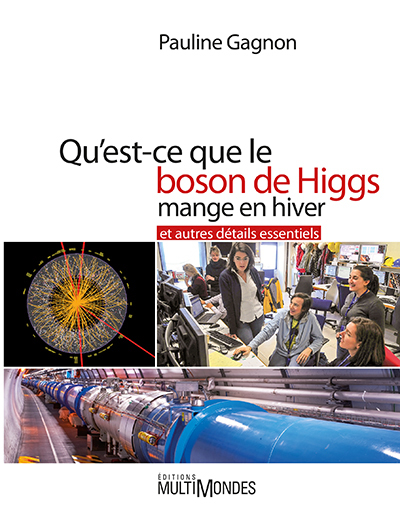 During our interview with this guest, we asked her several questions about this discovery as well as other related developments.

Who is Pauline Gagnon?

– I originally came from Chicoutimi where I taught physics to CEGEP students in Chicoutimi and Jonquière. Since childhood, I had always wanted to understand matter and its origins. Eventually, I decided to fulfil this lifelong dream and left for California to complete a doctorate in particle physics at the University of California in Santa Cruz. After that, I pursued my career at the CERN, the European particle physics laboratory, where I worked as a researcher from the University of Indiana.

What is the Importance of the Higgs Boson?

– This is the critical missing link of particle physics, and its discovery is helping us to complete a very important theory. We now have a much more precise model by which we can understand how matter is made. It also helps us to both prove and explain the mechanism by which all fundamental particles acquire mass. The boson was the missing component in the Standard Model of particle physics and it is the key to unlocking the mysteries of the universe.

How Will the Higgs Boson Affect our Daily Lives?

– It simply expands our understanding of the universe in which we live. This additional knowledge helps us to sleep a little easier, and that’s the main goal of fundamental research. The main purpose of fundamental research is to better understand how things work, but the discoveries we make do lead to all kinds of spinoff technologies which affect our daily lives. This kind of research has been at the origin of great technological developments in many fields such as telecommunications, medical imaging, electromagnetic waves, computers, etc.

Will There be any Special Applications from the Fallout of this Work?

– There will be no “Higgs Boson” application per se. Technology is something that is developed over time and, in the short-term, this particular work will lead to the development of some practical applications. As one example, we have developed more advanced vacuum techniques which facilitate the manufacture of better thermal solar panels and reduce heat losses by improving pipe insulation. Solar energy-based heating systems are now much more efficient.

Where is the Research at Now, after More than 2 Years of Work?

– In 2012, a new particle was discovered, but many of its properties are yet to be explored. We know that there are several kinds of Higgs Bosons but we don’t know exactly which kind we found. Is it the simplest or is it a slightly more complex variant? We must continue to explore until we find all the answers.

– Over the years I spent at the CERN as a member of the communications team, I have written hundreds of blogs, given over fifty public lectures, and answered hundreds of media questions posed throughout the world. The explanation of particle physics in simple, layman’s terms has become my trademark. My approach is to try to explain it as I would to my spouse, a relative or a friend. I have to write as though I’m speaking to someone who is curious but does not necessarily have a specialised science background. How do I do that? I focus on sharing my passion and this helps me to adopt the right tone and approach.

– At the CERN, in 2015, after two years of intense maintenance work and performance upgrades, the Large Hadron Collider (LHC) was finally re-started. The LHC will operate at an energy of 6.5 tera electron-volts (TeV) per beam, which is close to twice the energy used in the initial experiments. Among other things, the teams have interwoven some 10,000 electrical cables between the various magnets, added protection systems and improved other cryogenic, electronic and vacuum systems. The packets will be configured so as to ensure a greater number of collisions and tighter proton bundling and the time interval separating these packets will be cut in half from 50 to 25 nanoseconds. This highly-anticipated reactivation promises to lead to even more discoveries and a greater understanding of dark matter, antimatter, and quark-gluon plasma (QGP).