When Hearing our own Voice is Disturbing: the Occlusion Effect - By : Kévin Carillo, Olivier Doutres, Franck Sgard,

Kévin Carillo Author profile
Kévin Carillo is a PhD student in the Department of Mechanical Engineering at ÉTS. His research project focuses on studying the occlusion effect and aims to propose, and eventually develop, earplugs that can reduce this acoustic discomfort.
Program : Mechanical Engineering
Research laboratories : GRAM - Acoustics Research Group of Montréal

The occlusion effect is an acoustic discomfort commonly experienced by users of hearing aids or hearing protectors (i.e., earplugs or earmuffs). This phenomenon refers to the increased perception of physiological noise generated by the body, particularly the voice, when vibrations are propagated by bone conduction to the inner ear. Experimenting this phenomenon is very easy! Simply read these lines aloud while covering your ears. In this article, the scientific history of the occlusion effect is covered from its beginnings to our present understanding, and takes us to the heart of the process by which knowledge is built. Keywords: Occlusion effect, acoustic discomfort, hearing aid

If you read these lines aloud while covering your ears, either with the palms of your hands or by blocking the earcanal with your fingers, you will experience the occlusion effect. Your voice will sound deeper, hollow, or even cavernous, as if you are speaking with your head in a barrel. If you are in a quiet place and remain silent, you may be able to perceive your breathing, even your heart rate more clearly because of the occlusion effect. It is said that our hearing becomes more sensitive to the noises generated by our body! This phenomenon, which is very common in the fields of hearing aids and hearing protectors, is a notable acoustic discomfort that can lead to poor adjustment or even refusal to wear such devices. For a person with a disabling hearing loss, not wearing hearing aids can be a source of social isolation and psychological distress. For workers exposed to excessively high noise levels, the absence of hearing protectors can cause irreversible damage to their hearing. Reducing the occlusion effect induced by these devices is therefore critical and requires an understanding of their fundamental mechanism. This article traces the history of the phenomenon from its discovery to the present day—a brief epistemology at the heart of the scientific research process.

The Occlusion Effect, from Past to Present

In 1827, two scientists, Wheatstone and Tortual, independently reported the first experiments that brought this phenomenon—now known as the occlusion effect—to light. Wheatstone, a renowned British physicist, noted that sound emitted by the subject’s own voice, or by a tuning fork held against his head, is perceived to be louder by an occluded ear than by an unobstructed ear. Tortual noted that the ticking sound of a mechanical watch tightly clamped between the teeth is louder through the occluded ear. From these historical experiments began a long scientific journey during which many theories were developed to try and explain the occlusion effect and, more generally, the way in which internal sounds are transmitted in the form of vibrations to the inner ear.

The first explanations appeared between 1855 and 1863, when Mach proposed the longest-lasting explanation known as the “outflow theory”. This theory stated that physiological sounds propagate directly and exclusively to the cochleaThe chochlea is a spiral cavity in the inner ear that transforms sound into electrical signals transmitted to the brain, from which some parts are transmitted through the ear bones to the eardrum and “flow” out of the earcanal when it is open (see the anatomical diagram in Figure 1), but are blocked in the presence of an occlusion. At the time, the occlusion effect could not be precisely quantified and the outflow theory was not called into question until the 1920s. During this period, the first measurements of the phenomenon were made, objectively, by the increase in sound pressure in the occluded earcanal using a microphone, and subjectively, by a decrease in the subject’s audibility threshold when occluding the ear. Although vibrations can indeed propagate directly to the cochlea, Mach’s theory could not explain the fact that the magnitude of the phenomenon decreases as the occlusion device is inserted deeper into the earcanal. His theory was therefore invalidated.

In the early 1930s, von Békésy—who later received the 1961 Nobel Prize in Medicine for his work on the cochlea—suspected that the auditory canal wall vibration was the main source of the occlusion effect, but the mechanism making this vibration louder when the ear is occluded remained a mystery. During that period, a new “masking theory” emerged. It suggested that ambient noise masks sounds radiated by the vibrating wall of the earcanal and that they are only perceived when the ear is occluded. The theory was definitely rejected some two decades later when, in 1960, Huizing carried out measurements of the occlusion effect in an anechoic chamberAn anechoic chamber is a room designed to completely absorb reflections of either sound. They are also often isolated from waves entering from their surroundings. The word an-echoic meaning non-reflective, non-echoing, echo-free”. Réf. https://en.wikipedia.org/wiki/Sound, where background noise—and therefore the masking effect—is very weak, and confirmed that the occlusion effect persists under such conditions. 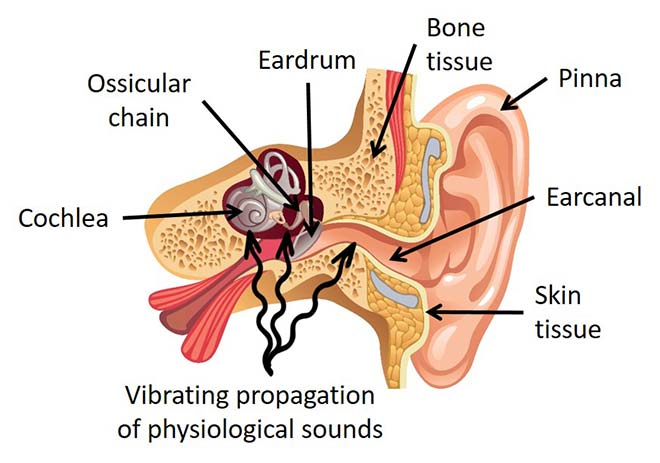 Figure 1: Diagram of a hearing aid and its vibratory transmission paths of physiological noise generated by the body.

The year 1964 marked a major turning point in the study of the phenomenon, when Tonndorf developed the first model of the occlusion effect, based on an electro-acoustic analogy. His model, more descriptive than predictive, conceptualized for the first time, the change in acoustic properties that takes place within the earcanal, which becomes somewhat more difficult to compress when occluded. However, the lack of clarity of this first model made its interpretation ambiguous and usually associated with the common belief that noise generated by the earcanal wall escapes through the entrance when it is open, but is trapped in the occluded earcanal, and thus more easily perceived. In a recently published article by the authors, interpretation of the occlusion effect was revisited in detail using both an electro-acoustic model and a numerical model constructed from anatomical images of a human subject (see Figure 2). 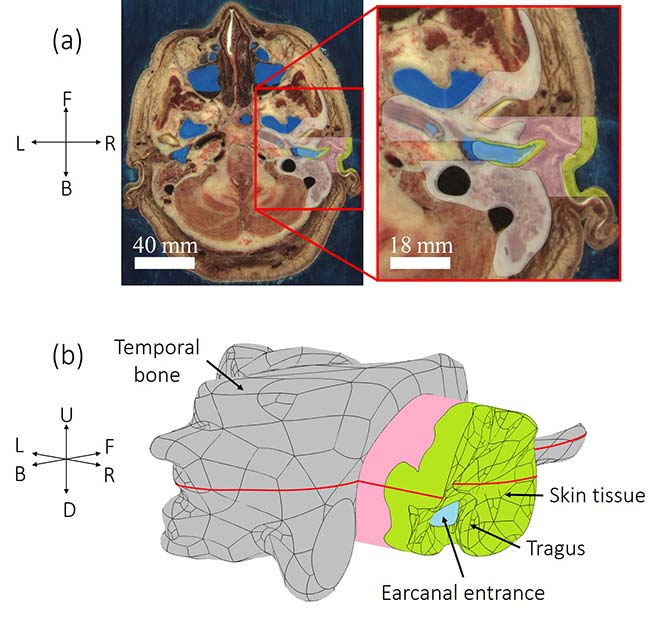 Figure 2: (a) Anatomical image of a human subject from which is constructed (b) a digitalnumerical model of a mechanically excited outer ear. The coordinates refer to Up (HU), Down (BD), Front (AvF), Back (ArB), Left (GL), and Right (DR).

The article illustrates in particular the fact that occluding the earcanal makes the air cavity formed between the occlusion device and the eardrum more difficult to compress by the vibrating wall of the earcanal. The occluded air cavity then further opposes this vibration, increasing the sound pressure level (noise) generated in the occluded duct (see Figure 3). In addition, the influence of the vibratory distribution of the duct wall on the occlusion effect was shown using a numerical model, clarifying how it is taken into account in the electro-acoustic models. Finally, the occlusion effect does not come from the fact that noise generated by the wall would escape from the open earcanal and be trapped in the occluded canal, but from the increase in noise generated by the auditory canal wall as a result of its occlusion. In addition, the phenomenon is influenced by the way the earcanal wall vibrates, as highlighted in our article.

Figure 3: (a) View of the ear canal (left) and the vibratory field of its wall (right), and (b) noise level in the open (left) and occluded (right) ear canal calculated at 100 Hz using the numerical model.

Multiple research questions regarding the occlusion effect are still being investigated, for example, the perception of associated discomfort and its relationship to objective indicators, the influence of inter-individual anatomical differences, or the way the occlusion device contributes to this phenomenon. In particular, new passive earplug concepts designed to reduce the occlusion effect are being considered and are starting to be developed at GRAM (Groupe de recherche en acoustique à Montréal), along with active devices already under study within the ÉTS CRITIAS research chair. Ultimately, these devices will make it possible to improve acoustic comfort and hearing protection for workers.

For further explanation of the fundamental mechanism of the occlusion effect, please refer to the following article:

CARILLO, Kévin, DOUTRES, Olivier, and SGARD, Franck. Theoretical investigation of the low frequency fundamental mechanism of the objective occlusion effect induced by bone-conducted stimulation. The Journal of the Acoustical Society of America, 2020, vol. 147, No. 5, pp. 3476–3489.

Kévin Carillo is a PhD student in the Department of Mechanical Engineering at ÉTS. His research project focuses on studying the occlusion effect and aims to propose, and eventually develop, earplugs that can reduce this acoustic discomfort.