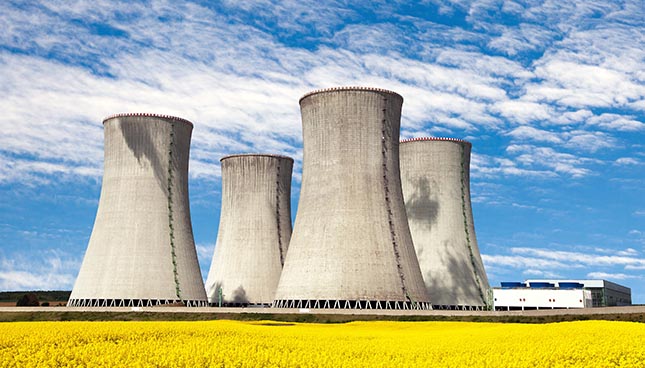 Accidents and nuclear activities—mainly those of La Hague (France) and Sellafield (Great Britain) plants—which began in the 1950s, contaminated the North Atlantic with the leakage of iodine-129 (129I) and other radionuclides such as tritium. A recent study by a group of Canadian, German and American researchers revealed the dramatic effects of 129I on the Atlantic oceanic circulation. Researcher Ashutosh Goel recently found the most effective and least dangerous way of containing 129I, one of the most difficult radioactive elements to isolate.

The diversity of radioactive waste requires methods of encapsulation, storage, transport and warehousing appropriate to their physicochemical properties and toxicities. Whether stored above ground (usually temporary storage), at shallow depth, in deep underground geological formation or disposed of in outer space, nuclear waste must be securely sealed to avoid its dispersal into the ecosystem. Before examining the conditioning technique created by Goel, let us briefly describe the encapsulation techniques currently in use.

Irradiated nuclear fuel contains the highest levels of radioactivity. In order to convert it into a substance that can be safely stored without risk or costly long-term management (such as waste stored as an aqueous nitric acid solution in steel tanks), the chosen method of solidification must:

Methods of nuclear waste solidification (or conversion of waste into glass and ceramics) are increasingly replacing encapsulation, that is the cladding of substances with insulating material combined with container storage used for the past twenty years, and mostly, because glasses and ceramics are materials with the aforementioned properties.
Existing solidification processes are:

Note that vitrification occurs only in the presence of certain elements. In fact, the introduction of radionuclides at fusion time requires certain types of elements in defined proportions so that they can be integrated into the vitreous structure. Due to this chemical requirement, vitrification of 129I is not yet used at nuclear waste treatment plants.

New Advance in Vitrification of 129I

The lifetime of the radioisotope 129I is very long. It is estimated at 15.7 million years. The atmospheric nuclear tests which took place between 1945 and 1962 released 4 × 1011 Bq of this radionuclide, almost all of which is present in soil worldwide and in the oceans. While being dispersed in liquids, gases and solids and readily absorbable by plants and animals, 129I can easily affect humans. It is one of the most radiotoxic isotopes and it accumulates rapidly in the thyroid, causing cancer.

Vitrification of the radioactive iodine-129 using the conventional method is not very effective due to its low solubility in silicate molten masses. It should also be noted that vitrification processes require high temperatures, which makes the environment for radioactive waste treatment even more dangerous.

Goel, a materials science engineer who obtained a PhD on glasses and ceramic glasses at the University of Aveiro in Portugal in 2009, solved two problems, namely confining the 129I in glass and in apatite without resorting to a high temperature. He worked between March 2011 and April 2012 at the Northwest Pacific National Laboratory of the US Department of Energy on high- and low-level radioactive waste immobilisation in glass. He began his academic research on 129I at the Rutgers School of Engineering in 2014. His research also focuses on the conditioning of alumina and sodium in borosilicate glass. His vitrification methods will be used at the nuclear facility of the Hanford Site (Washington State) in 2023.