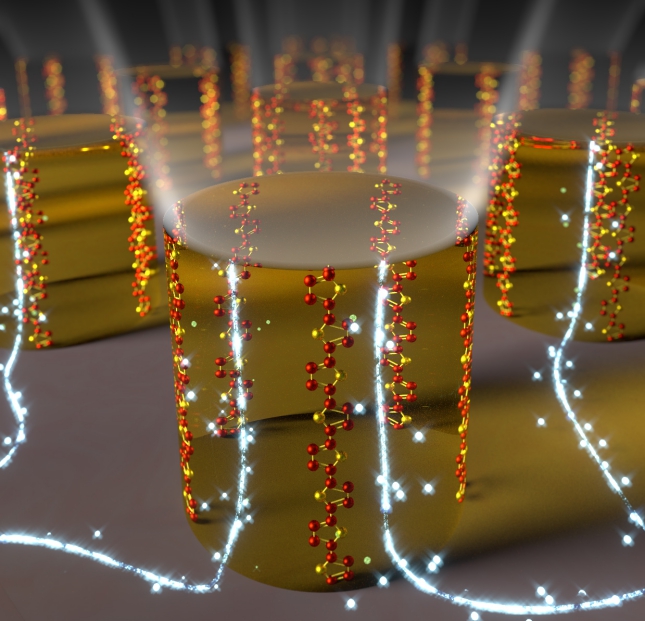 In the late 1970s, the work of three scientists: Alan J. Heeger, Alan G. MacDiarmid and Hideki Shirakawa initiated a new field of research that awarded them the Nobel prize in Chemistry in the year 2000 “for the discovery and development of conductive polymers”.

In the world of semiconductors not everything is silicon (Si), Germanium (Ge) or Gallium Arsenide (GaAs).  There are other materials of great importance but in more niche applications and markets. This is the case of conductive organic (carbon-based) polymers, which are now present in several products ranging from displays (OLED technologies, VIDEO), organic solar cells with flexible and transparent characteristics (VIDEO) and, living systems (White paper) such as biocompatible implants.

Although organic conducting polymers may not be as fast or as efficient in transporting electricity as their inorganic counterparts, they are lighter, flexible and more cost-efficient to process.  One characteristic, electronic transport, might have just been greatly improved with the investigation recently presented by a group of scientists at Umeå Universitet in Sweden.

This group found that by efficiently arranging the crystallite and polymer chains in a vertical fashion, a film transversal conductivity of the material can easily be improved by a thousand fold.  This is very important in the world of electronic devices because most are fabricated in an epitaxial way, that is, one layer atop other, even the contacts. It is obvious therefore, good electrical transport coming out or into your device is essential for it to operate at maximum capacity.

Most of the fabrication techniques employed in organic electronics yield the polymer chains (microscopic arrays of atoms of different materials linked together, as in a chain) aligned horizontally, that is, parallel to the device’s substrate and transversal to the normal flow of electricity.  This originates the common idea that semiconducting polymers do not transport electricity very well. However, if electricity travels along or parallel to the direction of the polymer chains, the polymer’s transport ability is greatly increased.

The group lead by professor David R. Barbero, perfected a technique to organize the polymer chains vertically in what’s called a crystallite, or a small domain of material organized in crystalline structure. This way, electrical transport will now take place parallel to the polymer chain AND in vertical direction.  Last but not least, this technique doesn’t require the use of dopants to achieve the desired transport properties which preserves the purity and initial properties of the material.

The conductive polymer used for this work is the well-known, poly(3-hexylthiophene), a.k.a. P3HT.  This polymer is broadly utilized in organic electronics because of its environmental stability, chemical processability and compatibility with other platforms and is relatively efficient in absorbing light in the visible range of the solar spectrum.  On a normal “horizontal” orientation the electrical transport can be measured to be on the order of ~10-4 – 10-3 cm2/V.s, where as with the new technique developed by Prof. Barbero and his team, P3HT has been measured to be 3.1 cm2/V.s, about a 1000 times better and the highest reported so far.

No matter how great an electronic device is, if the interface of said device with the macro world doesn’t allow electricity to flow as easy as possible, it will perform poorly. This advancement shines light to the world of conductive polymers enabling more applications that call for materials able to keep up with the performance required.