Pierre Pageaud Author profile
Pierre Pageaud is an Engineer in the aerospace sector in France. He completed a 6-month internship as an EPF Undergraduate Student at ÉTS, and as a Research Assistant at the LARCASE.
Program : Aerospace Engineering
Research chair : Canada Research Chair for Aircraft Modeling and Simulation Technologies
Research laboratories : LARCASE – Aeronautical Research Laboratory in Active Control, Avionics and Aeroservoelasticity 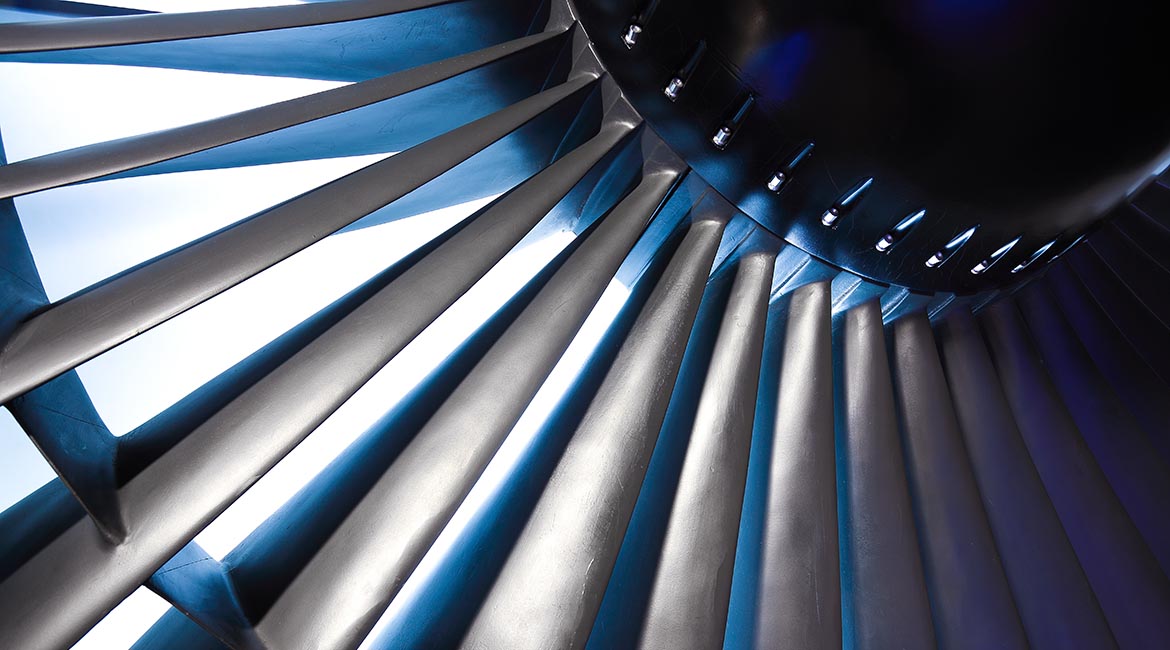 The number of aircraft passengers is continuously rising. This increase also signifies an increase in harmful gas emissions. The aeronautical industry is aiming to improve its current engines efficiency in order to reduce these emissions. The improvement of engine efficiency requires more accurate models in order to have a better understanding of the different variables involved. This study is focused on modelling the engine’s compressing elements. The purpose of this study is to model the fan pressure ratio, and the engine pressure ratio for all flight conditions. The data needed to identify the model are gathered from the Research Aircraft Flight Simulator (RAFS) of the Aeronautical Research Laboratory in Active Controls, Avionics and Aeroservoelasticity at ÉTS (LARCASE). Key words: engine, compressor, fan, modelling, flight tests, identification, validation

The number of aircraft passengers is continuously rising. This increase also signifies an increase in harmful gas emissions. To prevent this increase, the aerospace industry is performing research on aircraft efficiency improvement. Since the main component directly involved in CO2 and NOx emissions is the engine, numerous studies are being conducted in order to increase current engine efficiency. The engine studied is the Cessna Citation X model AE3007C1, developed by Rolls-Royce. This engine is a high bypass ratio twin-spool turbofan.

This study focused on Fan Pressure Ratio“The ratio of the fan discharge pressure to the fan inlet pressure” Ref. The Academic Dictionaries and Encyclopedias. and Engine Pressure Ratio“The ratio of the turbine discharge pressure to the compressor inlet pressure. This ratio indicates the amount of thrust produced by the turbine engine.” Ref. The Academic Dictionaries and Encyclopedias. (EPR) predictions. These parameters are considered to be dependent on three inputs. The engine behaviour depends on ambient air properties (pressure, temperature and density) which are directly dependent on altitude, when considering an International Standard Atmosphere model (ISA). The aircraft speed also impacts engine output, such as FPR and EPR. In this study, the Mach number, which is related to aircraft speed, is used. The third and last input is the pilot command which is quantified by the Throttle Lever Angle“The angle indicated by the Throttle Lever associated to one engine in the cockpit” (TLA). 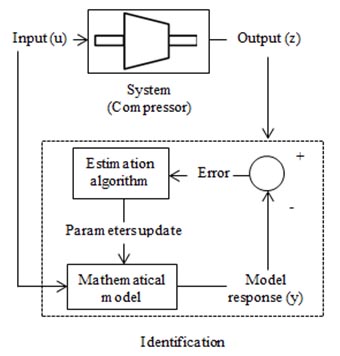 Firstly, a mathematical model is proposed. In this study, it was chosen to use models from the literature. The model response is then compared to the output from the actual system. The difference between these responses, or the error, is used by the estimation algorithm. Its purpose is to reduce this error by tuning the different parameters of the mathematical model. This process is iterated until the model reaches the desired precision.

As explained earlier, the identification process requires data in order to fine-tune the mathematical model parameters. The data was extracted from flight tests performed by use of the Research Aircraft Flight Simulator (RAFS), developed by CAE Inc. This simulator is equipped with Level D flight dynamics. The D level is the highest rank attributed by the FAA for flight dynamics of simulators. 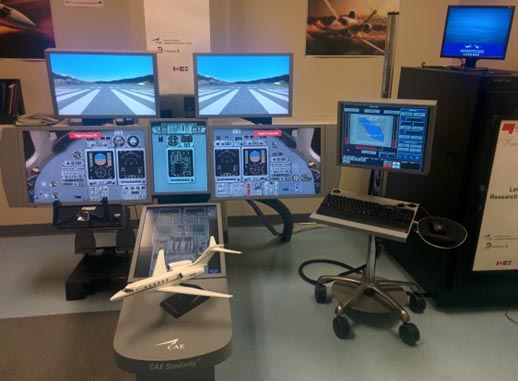 A Grey Box model is performed first, as chosen from the literature. In this study, the “Stage Stacking” method was used. This method consists in discretizing the compressor components. Generally, the compressors in gas turbine engines are axial, i.e., the fluid moves along the compressor rotating axis. An axial compressor is composed of different stages. Each axial stage allows to approximately double the ratio of pressure. The combustion chamber requires high pressure air in order to be ignited automatically with fuel. The different compressors must maintain a minimal pressure, which might be difficult to do especially at high altitudes. If they do not, the engine turns off. The solution was developed to position different engine stages side by side in order to obtain a high pressure compressor with a pressure ratio of 20 to 1. The engine under study includes a single stage fan, and a 14-stage high pressure compressor.

Each stage includes a rotor followed by a stator as shown in Figure 3. The rotor and the stator are composed of different blades with a shape adapted to increase the pressure. 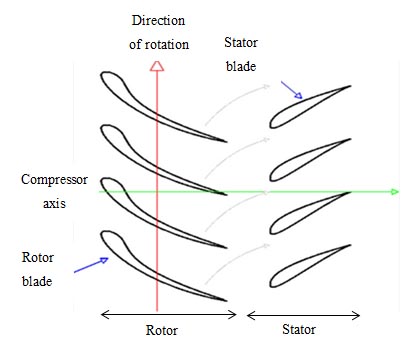 The “stage-stacking” methodology consists in modelling the first stage of the compressor, then using the first stage output as input for the next stage. This process is iterated for all stages up to the last stage, and therefore the final output is reached. The “stage-stacking” method consists in finding three coefficients quantifying speed, pressure and temperature variations. A common hypothesis in many studies and, consequently, in this one, is to consider that the stage inlet speed and outlet airspeed are the same. Concerning the pressure and temperature coefficients, these equations require different parameters, such as the blade angle. Because of the fact that a simulator does not provide these parameter values, in order to use the stage-stacking method equations, these parameters are identified with an estimation algorithm.

The purpose of the estimation algorithm consists in updating model parameter values in order to fit the model response to the experimental flight test data. In this study, the cost function is established using the method of least squares, i.e. the squared error between the model response and the flight test output. This cost function is then reduced using the Levenberg-Marquardt algorithm by tuning the model parameter values. Since this approach combines the use of a mathematical model with an estimation algorithm, it is then qualified as a “Grey Box” approach.

The estimation algorithm can also be used as a standalone. In this paper, this algorithm uses linear regression in order to determine the coefficients of a polynomial function depending on the three inputs (H, M, TLA). This approach is adapted for the FPR and the EPR predictions.

Generally, other variables are used for the prediction of these two parameters, the corrected rotational speeds of the compressor elements“Speed a component would rotate at if the inlet temperature correspond to ambiant conditions at sea level, on a standard day” ref. Wikipedia., N1cor, N2cor and the corrected fuel flow“Mass flow that would pass through a device if the inlet pressure and temperature corresponded to ambiant conditions at sea level, on a standard day” ref. Wikipedia W1cor, W2cor. The fuel flow can be expressed as function of inputs: Mach number and altitude, yet the rotational speed are not part of the inputs. Some studies use an iteration solver to match the compressor rotation speed to the turbine rotation speed (since these components are linked, they rotate at the same speed) for a full-engine model, with every engine component. Since this study is focused on the compressor components, the rotational speeds are used as part of the inputs for their further integration in a complete engine model. A polynomial function depending on the corrected fuel flow and the rotational speed will be determined with the same estimation algorithm.

The results are presented in Figure 4. 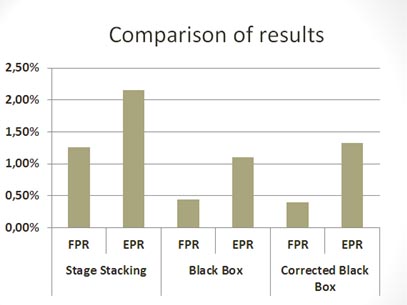 Yet, as presented above, using the corrected variables, the rotational speed would not be part of the inputs of a full-engine model, but would be determined iteratively. Thus, there would be an error calculated for all rotational speed predictions which would impact the FPR and the EPR predictions and the error would increase. Finally, the best choice seems to be the classical “Black Box” approach. Concerning the “Stage-Stacking” method, the mathematical model does not seem adapted to the engine under study, as the errors using this method are higher than the errors obtained for the two other “Black Box” approaches. Besides, it seems that since the output of each stage is used as an input for the next stage, the error increases quickly.

Further research will require the integration of the best compressor model in a complete engine model in order to predict other outputs such as thrust, fuel flow, and inter-turbine temperature using the same inputs. Also, it might be interesting to improve the “stage stacking” model using other software such as Gasturb in order to determine more accurate values of the blade angles since this parameter is required for the “Stage-Stacking” method.

For more information on this research, please see the following article:

Paul-Alexandre Bardela is a Master's Student at the École de technologie supérieure in Montreal, and a Research Assistant at the LARCASE. He is pursuing engine modelling research from flight test data.

Pierre Pageaud is an Engineer in the aerospace sector in France. He completed a 6-month internship as an EPF Undergraduate Student at ÉTS, and as a Research Assistant at the LARCASE.