Header picture is from ESA

Over the years and especially since 2000 when the Selective Availability (SA) feature of the Global Positioning System (GPS) was deactivated, satellite based positioning has become a widely used technique in a variety of application fields. However, its use remains limited in terms of availability, integrity, accuracy and resistance to interference [1]. These limitations indicate areas where current GPS receivers have exhibited a lack of robustness. The present invention relates to the construction on-the-fly of a Global Navigation Satellite System (GNSS) receiver according to different configurations including signal standards. 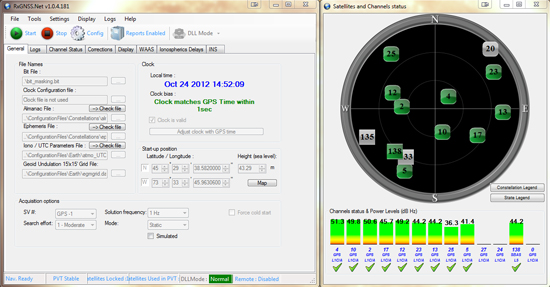 Example of channel status and power level of the system

The modernization of existing Global Navigation Satellite Systems and the arrival of new systems have diversified to a great extent the range of navigation signals available for civil use. The additional signals address the four traditional weaknesses of the GPS, namely availability, accuracy, integrity and resistance to interferences. This justifies the importance of implementing new robust acquisition and tracking architectures capable of harvesting all the new signals power in a compact design.

Availability (and continuity) refers to in-view satellites continuously broadcasting signals. Integrity refers to the reliability of the system and of its compliance with specifications, or that signals are as they should be and any anomaly should be promptly identified. Accuracy refers to the resolution of the navigation solution and the precision of the computed position. This depends on both the Dilution Of Precision (DOP), which models the satellites’ geometry, and the User Equivalent Range Error (UERE). Interference resistance is an important characteristic since interference events, whether they are intentional (i.e. jamming) or not, could compromise the raw observation measurements (i.e. code and carrier phase measurements). Unintentional sources of interference include harmonics of other frequency bands, amplifier non-linearities, and multipath, which causes superposed reflections to be added to a direct line of sight (or direct path) signal. Jamming can take the form of narrow- or wide-band, constant or pulsed, fixed or sweeping sinusoidal waves. More sophisticated jammers, such as “spoofers”, could also mimic and alter the true GPS signal by broadcasting another at higher power. 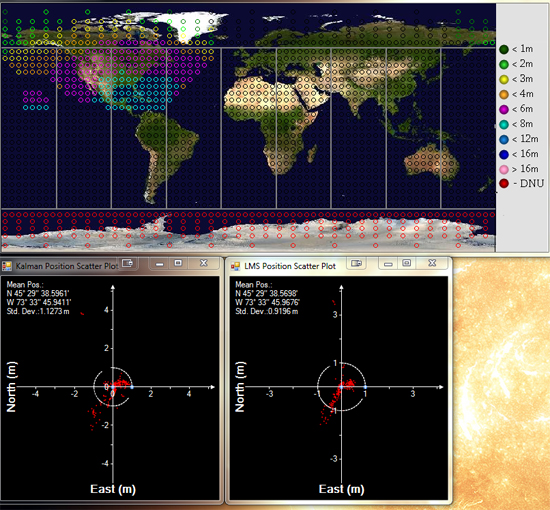 With the advent of more recent Global Navigation Satellite Systems (GNSS) including modernized GPS, GLONASS, Galileo and Beidou (a.k.a COMPASS) systems, new types of signals are now broadcast or at least should start being transmitted soon. These signals help resolve the above limitations of GPS.

One contribution of the new signals is that their higher signal bandwidths will increase the resistance to interference effects by diluting the impact of a narrow band interference over a larger bandwidth [2].The new signals should also provide better positioning accuracy and resistance to multipath since the chip period is shorter [3], thus requiring smaller correlator spacing and a higher sampling rate. Longer codes will increase cross-correlation protection of the signals and their robustness in weak signal environments. The higher number of satellites will increase availability and increase accuracy by reducing DOP impact. Integrity should also be improved through more detailed navigation messages.

Currently, the most economical way to produce a navigation receiver is through an Application Specific Integrated Circuit (ASIC), which provides low-cost devices at high volumes. Therefore, hardware resource use of a GNSS channel is still an important consideration, despite the recent trend for pure software receivers or Software Defined Radios (SDR). Indeed, in ASIC designs that are based on signal-specific channels, chances are good that high percentages of the chip will not be used most of the time. Also, populating many dedicated channels drives IC cost up. This is an important consideration going forward, as increasing blocks of functionality i.e. such as GPS, or GNSS receivers are being implemented as IP cores and are therefore expected to occupy less of the overall available ASIC real estate.

Indeed, in the case of a totally Software Defined Receiver for GNSS, implemented on a Personal Computer (PC), there may be no issue regarding which of the navigation signals should be tracked.  But most commercially available resource-limited receivers are not as flexible and still rely on dedicated hardware to cope with the large loads of computation required by the multi-channel tracking process.

The development of a universal design for an acquisition and tracking channel should thus apply to all currently defined or planned GNSS signals. In other words, there is a great need for an efficient architecture capable of adressing the coming processing needs.

DESCRIPTION OF THE EMBODIMENTS OF THE INVENTION

The overall architecture of a Global Navigation Satellite Systems (GNSS) receiver 100 is illustrated in Figure 1 showing an Antenna 102, which may capture a number of radio signals carrying navigation signals 104 on different frequencies from different satellites and deliver captured signals 106 to a Radio Frequency Front End 108. The Radio Frequency Front End 108 converts all captured signals 106 to intermediate frequency (IF) and outputs one or more digitized IF signals 110 which are processed in an Acquisition and Tracking Subsystem Apparatus 112 that delivers decoded navigation message bit streams and other data 114 to an Evaluation Subsystem 116. The Acquisition and Tracking Subsystem 112 will be also referred to as Acquisition and Tracking Apparatus 112 in this patent application.

The standard satellite radio frequencies used by the four different GNSSs are shown in Table 1.  As it is well known, the GNSS receiver must receive and track several satellite signals on one or more different frequencies simultaneously. Although the navigation signals transmitted on the same frequency may be used by all satellites in the same navigation system, and the frequencies may be shared with satellite signals of other constellations, the signals are still distinguished by their modulation which includes spreading codes and optionally subcarrier. 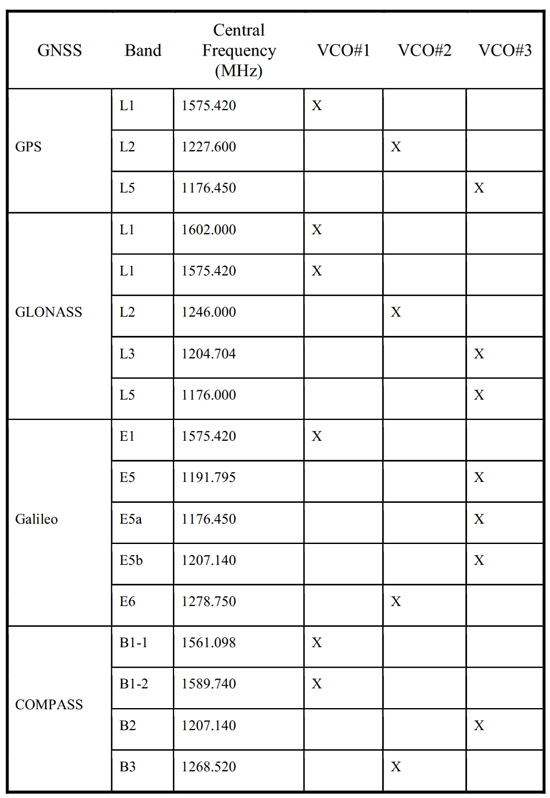 Considering the large number civil GNSS RF signal components (in 2009, 614 are listed in Table 2; the number would be even greater if regional and augmentation systems were also considered) that are available worldwide, almost half should be visible to a user at any given time. The importance of reducing the total complexity and reusing as many resources as possible is very desirable, as are robustness and precision of the solution. Indeed, dedicated channels would remain unused if their targeted signal was unavailable, thus wasting power and ASIC space without any outcome. 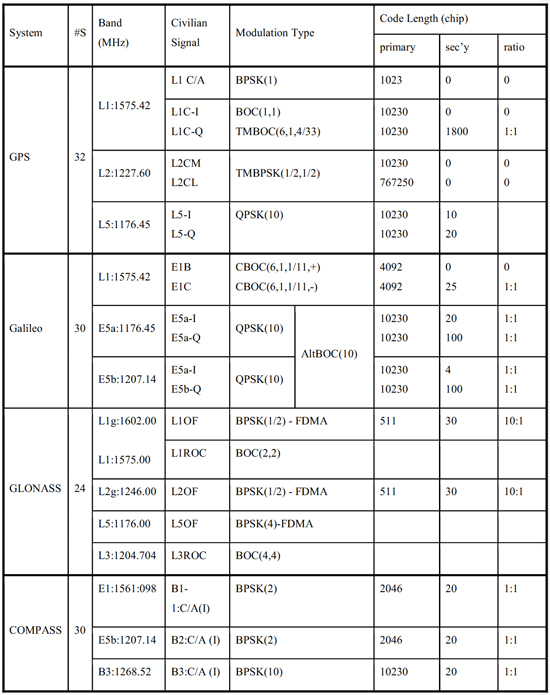 Although there is similarity between the various GNSS signals, the task to decode all these signals with a single design, i.e. the universal acquisition and tracking channel of the invention necessitates taking into account all these particularities.

Signal analysis done by the system

The proposed architecture allows sequential acquisition and tracking of any chipping rate, any carrier frequency, any FDMA channel, any modulation (i.e. BPSK, sin/cos BOC(x,y), CBOC and TMBOC), any constellation and is completely configurable with respect to integration times, discriminator function, and so on.  It also provides robustness against jamming or system failures. The dual component architecture allows an interesting sequential acquisition option: dual code delay estimation for twice as fast acquisition time. Moreover, its upgradable memory codes and configurability of the sub-carriers (phase and weights α and β) make it future-compliant. This came at the cost of increasing the number of non-coherent phase tracking channel correlators from 6 to only 16 for the dual component channel, because of the reduction in sub-carrier resources achieved through their combination.

For a more comprehensive discussion about “Universal Acquisition and Tracking Apparatus for Global Navigation Satellite Systems”, we invite you to read the research Patent Application Publication.

Marc-Antoine Fortin is pursuing his Ph.D. at ÉTS in the field of Global Navigation Satellite System (GNSS) and receivers robustness. He previously completed an Electrical Engineering Master's degree from École Polytechnique in 2005.

Jean-Christophe Guay holds a Bachelor’s degree and a Master’s degree in Electrical Engineering from ÉTS. As part of his Master’s degree project, he has mainly integrated the SBAS capabilities in a FPGA-based GNSS receiver.