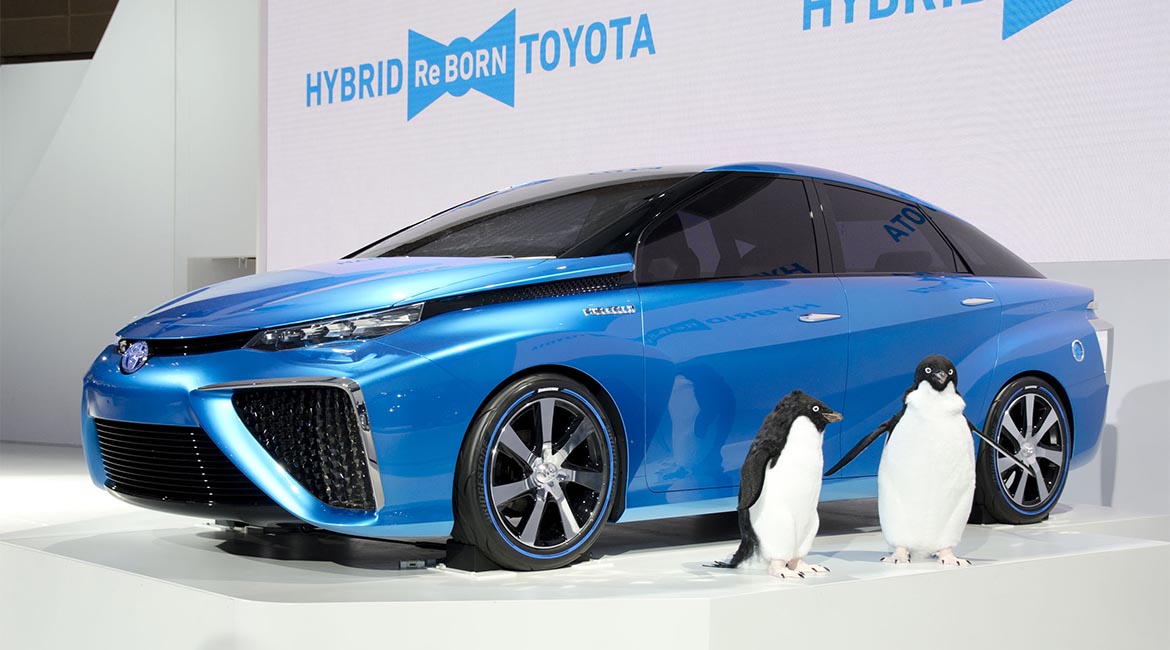 Header picture is from Mytho88, no usage restriction, source.

For over 50 years, many car manufacturers have embarked on the adventure of producing a vehicle operating with a fuel cell without really succeeding in this niche market so far. The most recent commercial trials come from several manufacturers with the following models: Audi Q5-FCEV (2009), Fiat Panda-HyTRAN (2009), Mazda 5 Hydrogen RE Hybrid (2009), Mercedes-Benz B-Class-F-Cell (2009), Nissan X-Trail-FCV (2009), Volkswagen Caddy-Maxi HyMotion (2009), BMW 1 series-fuel cell hybrid (2010) and Mercedes-Benz-F800-(2010). 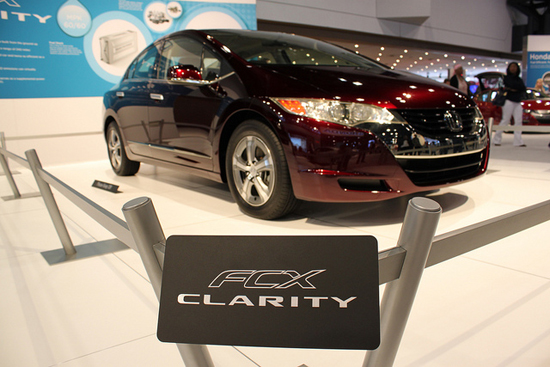 In 2007, Honda was one of the first companies to initiate commercial approaches to market a vehicle operating with a fuel cell. The car was the Honda FCX Clarity shown above. This concept car  for which around 100 copies were produced, has failed to achieve the desired level of commercialization.

Toyota announced January 6th, 2014 at the “Consumer Electronics Show” (CES) in Las Vegas, the marketing of a car using a fuel cell: The Toyota FCV 2015. This car will be offered to consumers of Japan and California. Those consumers will have the chance to drive a vehicle using the energy source that could power vehicles of the future when gasoline price will hit rocketsky.

But. what’s a fuel cell? According to Wikipedia, a fuel cell is “a device that converts the chemical energy from a fuel into electricity through a chemical reaction with oxygen or another oxidizing agent.”

This second video gives us more details on the  fuel cells technology in place in this car:

This technology produces energy, heat and water vapor as emission gas: it is what it takes to our planet to counteract significantly greenhouse emission gas produced by vehicles running on gasoline. The fuel cell produces electricity to power an electric motor as in an electric car. This vehicle will have an estimated autonomy of 480 km (298 miles)  and 10 seconds acceleration time to do 0-100 km / h (0-60mph).

Driving a car powered by a fuel cell vehicle is like driving an electric vehicle with a range three times greater than what is currently possible with a Nissan Leaf. However, the acquisition price of a Toyota FCV 2015 is currently way too high: the basic version will be available for 7,000,000 yen in Japan or the equivalent of $ 74,000 in canada! Very very expensive for a vehicle that looks like a $ 30,000 midsize sedan car.

Toyota is part of a consortium with four other vehicle manufacturers including Hyundai, BMW, Honda and Mercedes, who have committed to provide in Europe 110 vehicles using fuel cells vehicles. Hyundai alone will provide 75 multi-segment Tucson / ix35  from the 110 vehicles to deliver.

Commercialization of vehicles powered by a fuel cell will generate several problems who need to be addressed as a priority: hydrogen production and hydrogen fuel stations:

It is nevertheless a great step forward that automakers will try to make us do by introducing these new green technologies. This is how electric vehicles have started their marketing even if the public had at that time, a lot of questions, fears and hope, with the marketing of the first Toyota Prius in Japan in 1997. 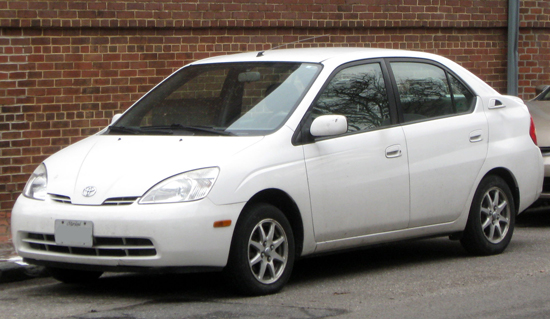 Actual fuel cells vehicle have a distinct advantage compare to electric vehicles when they started to be commercialized : A fuel cell vehicle is an ELECTRIC VEHICLES where the batteries have been replaced by fuel cells. Manufacturers today know how to do an electric vehicle. They have yet to find how to make fuel cells at a competitive cost!