Tomorrow’s Cities Will Transpire Like Canopies - By : Hanen Hattab, 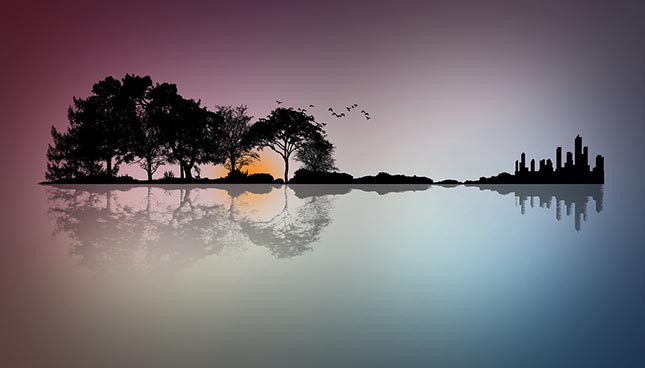 The “Urban Water Planification Project” (UWIN), founded and financed by the National Science Foundation and Colorado State University, is a project dealing with the city of tomorrow that began in August 2015 and will end in 2020. UWIN brought together 14 academic and government institutions to design urban planning systems for the United States as part of a holistic strategy of sustainable urban development. The central idea of this project is to view the city as a truly balanced natural ecosystem where water management represents the key to a synergistic urban structure. This article focuses on the climate and architectural studies carried out within the transdisciplinary scientific nursery studying urban climatology, infrastructure and architecture at Princeton University.

Research by Elie Bou-Zeid, Associate Professor of Civil and Environmental Engineering at the School of Engineering and Applied Science, UWIN Senior Researcher and Princeton University Representative, focuses on fluid mechanics in the urban environment. His latest study, “The Influence of Building Geometry on Street Canyon Air Flow: Validation of Large Eddy Simulations for Wind Tunnel Experiments ,” published in March 2017 in the Journal of Wind Engineering & Industrial Aerodynamics, is part of a series of research studies involving the Environmental Fluid Mechanics Research Group at Princeton and other universities (within the UWIN framework). The study focuses on the optimization of rainwater and wastewater management networks in order to reduce energy consumption.

In his research, Bou-Zeid noticed that urban air flows influence energy consumption. Indeed, rainwater is directed straight from the waterproof pavement to underground canals, taking the heat along with it. The trapped heat can increase city heat by 10 to 15 degrees Fahrenheit (6 to 9 degrees Celsius) more than that of the surrounding countryside. This is the urban heat island effect, known to increase energy consumption and fossil fuel use, and thus contribute to climate change. The impermeability of the pavement and its dark colour, which also stores heat, prevent the natural phenomenon of evapotranspiration, which helps refresh the temperature in green spaces by dissipating heat. Planting a massive amount of greenery in urban areas is not an economical solution in some cases, given the scarcity of water in desert environments. It is on the basis of these observations that Bou-Zeid got involved with UWIN. Bou-Zeid and his colleagues at the University of Maryland and Arizona State University are creating software modelling a water system that will contribute to a reduction in energy consumption in cities based on their climate and geological data.

To ensure that the urban landscape is accurately represented in such simulations, Professor of Engineering and Applied Science James Smith is heading a research team from five UWIN universities to produce highly accurate precipitation and flood maps in each of the cities. According to Smith, these studies of real cities are the only way to understand the current and future effects of urbanization. In 2020, UWIN will have produced a report containing studies and recommendations for the cities under study. In this report, architectural construction will be as important as the urban infrastructure. The focus will be on materials and design as well as on construction methods. The Princeton University School of Architecture also studied the phenomenon of evaporation.

Construction of a ThermoHelioDome Prototype by Architecture students at Princeton University

In this study, Forest Meggers, Professor of Architecture at the Andlinger Center for Energy and the Environment, proposes a self-sufficient housing model for the city of the future. In order to regulate its internal climate, this architecture, called the ThermoHelioDome, uses a system based on water. It is a three-dimensional cell-like structure with odd angles and a reflective coating. Through the effect of reflection, each cell brings heat to pipes cooled with water. The outer membrane of the building allows the heat to escape in the form of vapour or to store it at the underground level, releasing it at night when it is cooler.

Meggers and Ph.D. candidate Dorit Aviv proposed a moving version of this structure, the top of which opens at night and retracts during the day, providing a shape that promotes the circulation of cooled air. This concept, proposed for the hot desert climate of the Middle East, is also suitable for US Southwestern cities participating in UWIN. The construction was named Cool Oculus because it resembles the ceiling vaults at the pinnacle of Roman basilicas.

The Meggers structure involves two methods of transferring heat, namely by air and water molecules and by radiation—such as light that spreads from one surface to another. Meggers developed a thermal detection camera because thermometers cannot measure radiation heat transfer. Her camera can capture a 360-degree shot used by researchers to construct and study a 3-D model of radiating surfaces in any room.

Mapping of heat detected by the thermal camera