The World Serpent - By : Jorge Ramos,

On March 13, the government of Canada announced a Health Emergency following a pandemic declaration by the World Health Organization (WHO) on the Corona virus disease (COVID-19) outbreak.

Understanding how the virus could spread in so many countries worldwide has prompted high expectations in terms of statistics from key indicators, such as number of tests, people infected, and death toll. Behind the message from health authorities to “flatten the curve” there are several variables that can be expressed mathematically; however, these variables are not standardized in the various reports from different countries.

Among countless recommendations from local, provincial and world authorities, and media frenzy, the need for basic indicators became clear to me to learn more about my own reality and be able to answer the question from loved ones: How are we doing?

For Canadians, it is common to have relatives in other parts of the world, so it concerned me to understand the impact of COVID-19 on my own folks, in their own cities, using similar indicators from their local authorities. News and stats were concentrated in showing results at a national level only.

Because the lockdown forced everyone to stay home, and inter-regional travel was prohibited, my objective was to find a ratio between the number of cases and the population of that location or city where I, or my loved ones, reside.

I started a simple linear day-by-day chart to plot the results—for everyone at home to watch—with data from local web sites based on a single but common key counter: NCC (Number of Confirmed Cases). However, to my surprise and apparent optimism, my linear scale produced a chart that went through the roof!

To avoid losing perspective and keep all locations visible in a single graphic, I switched to a less familiar, but more helpful chart: The Radar-Chart w/Logarithmic Scale.

As seen in figure B, a linear chart displays cumulative NCC counters for three locations, starting on March 20; however, due to the exponential behaviour of the contagion the ‘counting’ report was moved from figure A (A-1 zoom view; A-2 normal view) to a logarithmic chart. 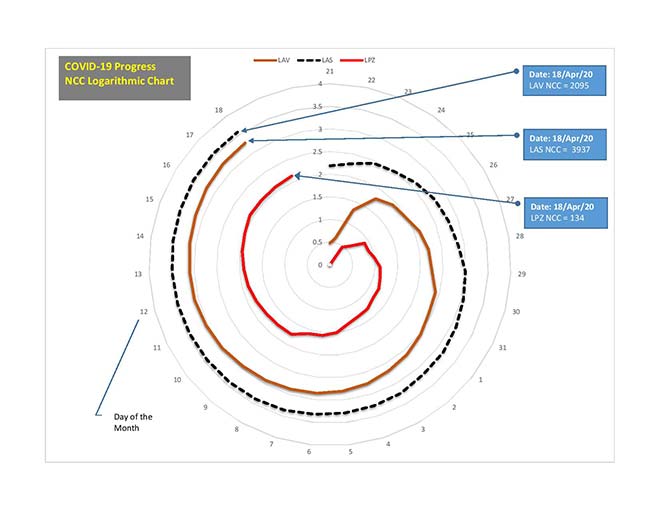 In figure 2, an Excel based chart with source data tables from cumulative NCCs in Wiki labels the three locations as LAV, LAS, and LPZ, figures A and B, for a period of four weeks to compare behaviour and similarities in the progression of COVID-19 in specific locations.

As to the questions that need answers: How are we doing? When is it going to be over? How to flatten the curve?

… after analyzing the logarithmic chart, my answer is…

… all will be better…

WHEN THE SNAKE EATS ITS TAIL!


This appears to me as a bizarre omen of what is going on these days, with so many strange implications, such as is the meaning of the World Serpent.