In its attempt to reduce congestion in health facilities, the Internet of Things is also pioneering a new type of wearable diagnosis. Data collected by smart phones represent a gold mine of information on each part of the body and their metabolic rate. The systems, which combine the collection, receiving, sending and analyzing of information, are autonomous means of traceability. Managing the data flow is a major challenge as much at the receiving as at the collection stages. Although the collection function is increasingly accessible due to significant developments in portable sensors, probing some parts of the body is not always easy. This is one technological difficulty that researchers at the GI Innovation Group, at the University of California (UC) in San Diego, have been able to resolve.

While trying to create a gastrointestinal tracking system, the research team was faced with a special challenge. The electrical signals produced by the stomach are ten times weaker than those of the heart, making them difficult to detect among other noises inside the body.

The system designed by the researchers works like an electrocardiogram. It can monitor gastrointestinal tract activity in real time, a type of examination usually done by specialists. The new technology promises to facilitate and optimize diagnoses by enabling 24-hour at-home follow-ups. Abnormal symptoms like nausea and stomach aches, which occur at any time of the day, can then be recorded even outside clinical settings. Information on vital activities like eating, sleeping, exercising, etc. can also be recorded and combined with electrical signal analyses. In addition, this technology will make it possible for patients to avoid anesthesia.

According to Armen Gharibans, lead author of the study, this system will revolutionize gastroenterologist diagnoses by making them faster, more accurate and personalized. Analyzing gastrointestinal tract mapping can also prove beneficial to healthy people. For example, according to the team, the technology could be used to track top athletes in order to adapt their diets to changes in routine during travel. 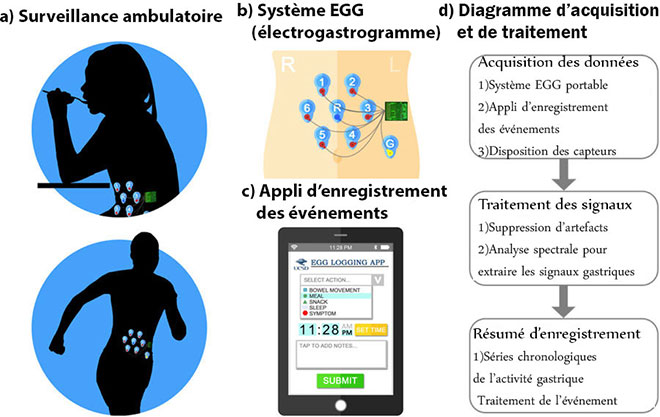 The system and its collection, analysis and data transmission stages

The system consists of a device attached to the abdomen and an application. Data received by the intelligent mobile terminal are transmitted to health care personnel. The device consists of a battery-operated 3D-printed box equipped with 10 electrodes that detect electrical activity. The research group led by Todd Coleman, professor of bioengineering at UC San Diego, used their signal processing expertise to create an algorithm that solved the issue of signal discrimination. It is an automatic artifact removal algorithm that selects data by separating abdominal muscle activity, heartbeat, and gastric activity into different frequency bands, allowing clinicians to examine them individually and compare them.

Tests conducted on 11 children and one adult showed that the data collected by the system are similar to those of invasive clinical methods. Results showed changes in gastrointestinal activity not only during meals, but also during sleep, according to circadian rhythms.

The system could also be used for advanced research on aging and pregnancy, two important factors in gastric problems that have been poorly studied so far. Monitoring these two vital processes could therefore lead to the creation of technologies, and gastric health prediction and prevention protocols.