31 May 2021 | Research article | Sustainable Development, the Circular Economy and Environmental Issues , Infrastructure and the Built Environment 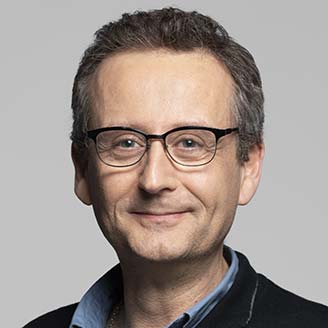 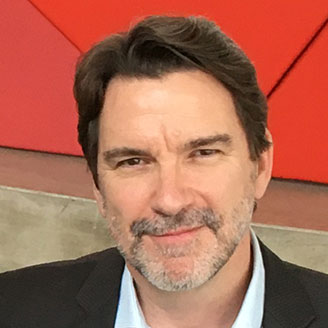 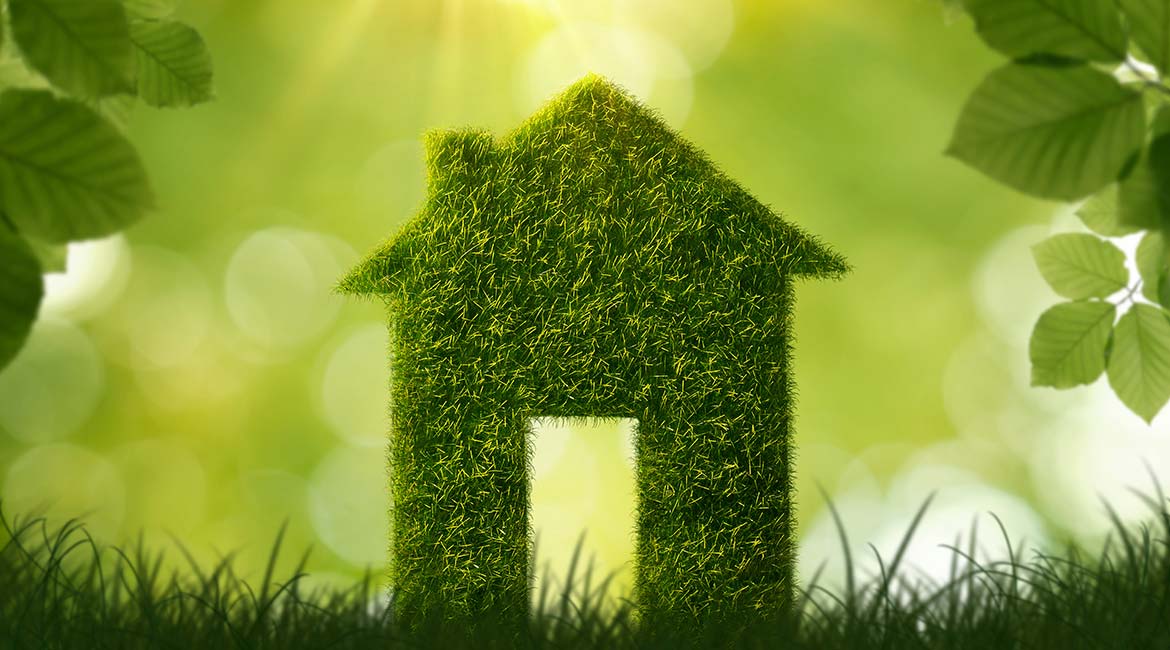 8.6%1: this seemingly trivial statistic represents the overall circularity rate in the global economy of 2020. In other words, of the approximately 100 billion tons of material that entered the economy last year, only 8.6% came from recirculated materials. The difference, about 91 billion tons, came from virgin resources. Of the 100 billion tons of material, more than one third (38.8%) is from the built environment, making it the most resource-intensive sector, and a major producer of waste.

There are, however, wide disparities between industrialized and developing countries in terms of circularity. For example, the circularity of Norway’s economy is about 2.4%2. Considering that Canada’s economy is quite similar to Norway’s, one can assume that the circularity rate of the Canadian economy will also be quite similar to that of its Scandinavian counterpart, which is both a major challenge and an important source of opportunities.

The dominant linear economy model (extract – produce – distribute – consume – discard), which has been around since the start of the industrial era, is showing signs of weakness. Based on the assumption of an infinite availability of resources, this economic model measures its wealth on maximizing the number of units sold. Hardly compatible with the concept of sustainable development, it encourages over-consumption and waste of resources, including energy, thus jeopardizing the ability of future generations to meet their needs.

With the prospect of a significant increase of middle-class consumers worldwide in the coming years—a number that is expected to almost double between 2018 and 20303—the pressure on already over-consumed resources and on the environment in general is set to increase accordingly. In addition, social pressures to preserve the quality of the environment and ecosystems are increasing in number and intensity, particularly in developed countries, adding to the difficulty of accessing resources, whose deposits are dwindling and require more energy to extract. Economically, the growing volatility of commodity prices makes it more difficult to cost goods and services, creating market insecurity, increasing risks for companies, and discouraging investments. Finally, the COVID-19 pandemic has revealed the weaknesses of globalized supply chains, several of which have been interrupted over the past year. 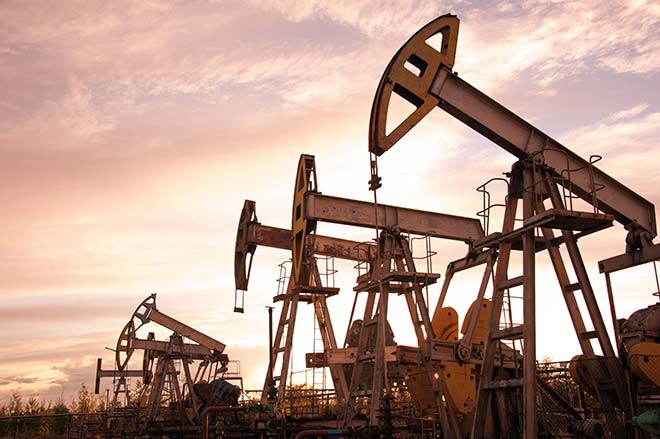 In light of these disturbing facts, a fundamental movement to reform the current linear economic model in favour of an economic model more respectful of the planet’s capacity is being progressively put in place at the international level and, more recently, at the Canadian level.

Known as the circular economy, this new economic model is based on the concerted deployment of various tools and strategies (see Figure 1). One pillar of the circular economy is collaborative consumption, which maximizes the use of a product or service by sharing it among several consumers. The functional economy, based on the sale of the service provided by a product rather than the product itself, is also part of the concept. 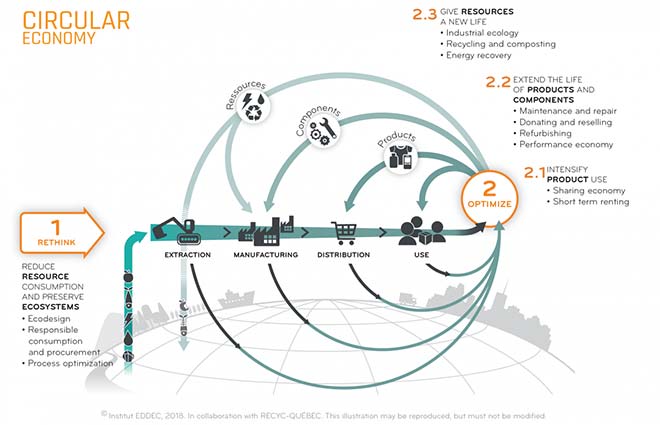 From a perspective where product ownership remains with the manufacturer or its distributors, extending the duration of use through product repair or reconditioning makes economic sense. In short, the circular economy aims to maximize the productivity of products—and the resources they are made up of—already circulating within the market. This way, the need to extract virgin resources to meet market needs is reduced, as is landfilling of end-of-life products, since these become, in a large part, the source of raw materials to produce new units. Therein lies an economic interest, beyond the environmental interest, in closing the loop. In terms of energy, a circular economy encourages the use of renewable energy, as well as recovery of energy losses (waste energy). But in reality, at the building level, what are the opportunities available in a circular economy?

Like any production process of goods and services, construction, operation, maintenance, and deconstruction stages of a building rely on the supply, storage, and release of materials and energy-generating pressures on the environment in terms of resource depletion and impacts on receiving environments. In this context, the various circular economy strategies can be considered at several stages of material cycles that make up the building envelope, mechanical system components, furniture or supplies to support the activities within each one (industrial, commercial, institutional, residential).

Rethinking to reduce pressure on resources starts with an eco-design approach created for longer retention of the material capital. From the very first stages, an adapted design is based on the choice of materials with a higher potential for circularity and on systems that can be adapted over time (easy upgrading, dismantling, etc.). An eco-design strategy requires the identification of potential recycling channels for products, components, and resources put into circulation, while integrating repairs, refurbishing or renovation approaches. Therefore, intensifying use, extending lifespan, and increasing the circularity of products or system components must be taken into account from the very first stages of a project design. At the same time, the production and construction stages are based on responsible consumption and procurement, choosing suppliers who integrate the same concerns into their operations, who promote short product circuits, and who support operations optimization4. 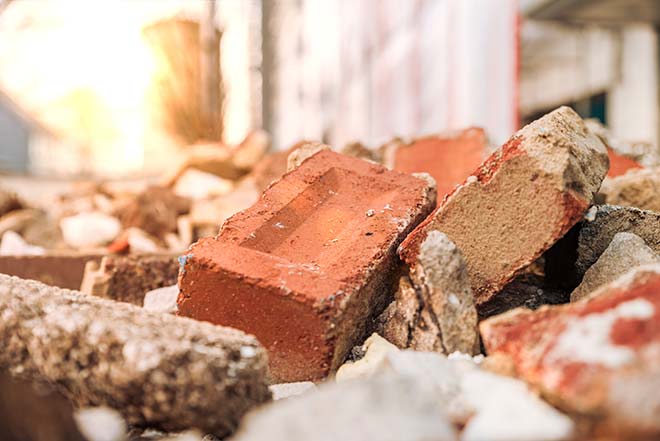 Using products more frequently relies on collaborative economy strategies and on short-term rentals. More specifically, the collaborative economy is based on activities that aim to share or pool goods, knowledge, services or spaces and on use rather than possession. This model has applications in the transportation (Uber, Communauto, Eva5) and accommodation (Airbnb) sectors. In office buildings, a flexible layout of premises makes it possible to offer shared workspaces that can be adapted to the needs of workers while intensifying the use of surface areas and furniture, and pooling systems and service equipment. This approach is the basis for short-term workspace rental platforms6.

Extending lifespans relies on strategies like maintenance and repair, donations and resale, refurbishing, or the implementation of a business model based on the service economy—selling the use of an asset rather than the asset itself. In a principle of reusing products or components of a system, it is generally necessary to intercede to upgrade it or make it functional again, either aesthetically or technically. A remanufacturing strategy is especially applicable to products or components that have a useful life of one or more decades and must compete with replacing the product for a new one.

By offering a service rather than a product based on a service economy model, the manufacturer retains ownership of the product and, by extension, its material capital. This approach minimizes the impacts of raw material price volatility. At the end of the usage cycle, the product or its components can be refurbished or disassembled to provide new components or secondary raw materials. For example, Xerox charges for its photocopiers on a per-use basis, and Philips sells a lighting service (LaaS).

Giving new life to products and materials involves strategies for recycling, recovery or the establishment of industrial symbioses. Recycling is one of the most developed strategies, especially for consumer products. As for buildings, the ability to selectively deconstruct an infrastructure makes it possible to separate construction materials or components and facilitate their recovery7 and recycling. For example, Villa Welpeloo8 in the Netherlands was built with 60% recycled materials. However, one of the challenges lies in the ability to respond to supply constraints: the key is the ability to identify the sources of end-of-cycle materials, their characteristics and their availability at the time of construction. 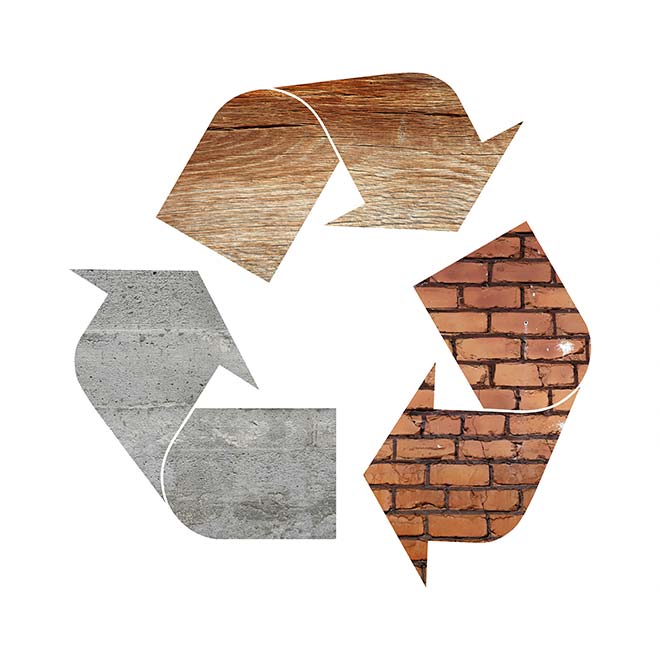 In a territorial and secondary raw materials transaction approach, online information sharing initiatives are becoming increasingly available. They allow manufacturers to easily access secondary material deposits. The French initiative Cycle Up9 is an example of a digital marketplace dedicated to the reuse of construction materials by connecting supply and demand.

Several examples demonstrate that it is possible to circulate heat flows. The CCUM thermal power plant in downtown Montreal heats water and high-pressure steam that circulates within a one-and-a-half-kilometre radius to power intelligent building heating systems10. The loop is fuelled by natural gas, and heat is transferred to the building. However, because the loop runs on natural gas, an energy source that is non-renewable, apart from the heat flow loop, it does not actually meet the concept of natural resource circularity. Geothermal heat streams are becoming a more attractive resource option. For example, Solon’s Celsius project demonstrates the feasibility of deploying a renewable and local energy infrastructure based on geothermal wells and circulating a heat transfer fluid (Celsius project11).

Quebec’s circularity rate, released on May 26, 2021, shows that its economy is 3.5% circular. This is below the global average of 8.6% and far below that of the Netherlands, the current champion of circularity, estimated at 24.5%. This means that aggressive strategies must be implemented to rethink flows and the way we design our products and infrastructures. Much work remains to be done. Challenges lie ahead in terms of technical and economic feasibility, but also in terms of business relationships, and the need to adapt criteria for tenders and certification processes. The circular economy is part of a global approach over all product cycles in order to ensure resource conservation while guaranteeing a match between supply and demand.

Mathias Glaus is a professor in the Department of Construction Engineering at École de technologie supérieure.

Daniel Normandin is a renowned expert and speaker on environmental biotechnology, sustainable development, life cycle management and the circular economy. 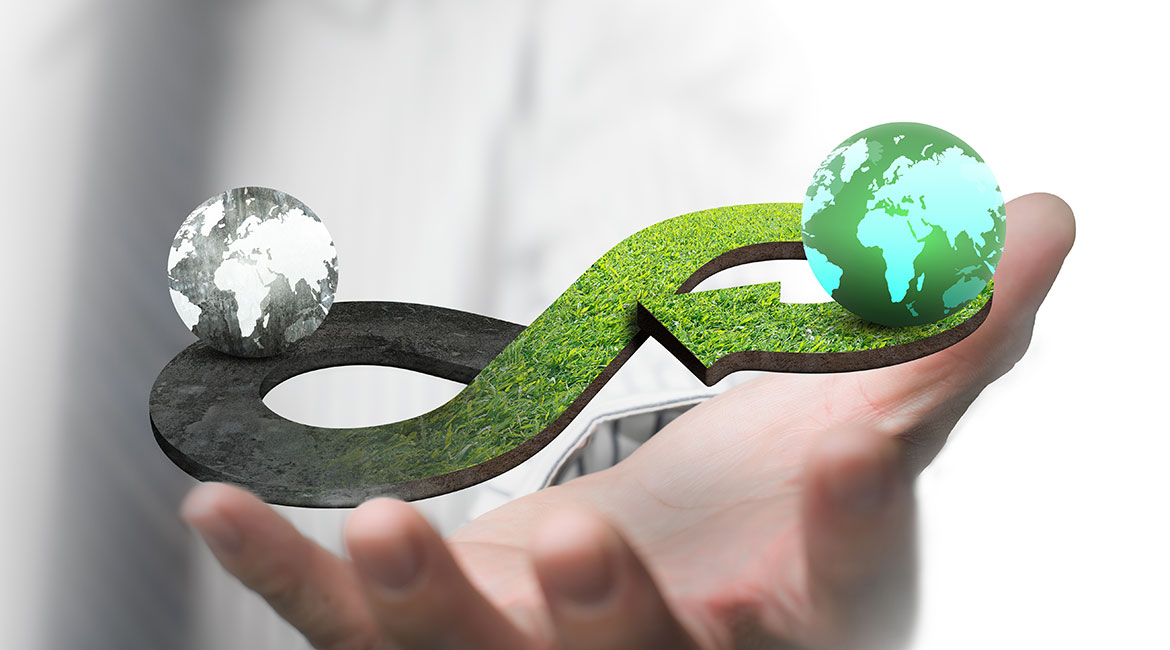