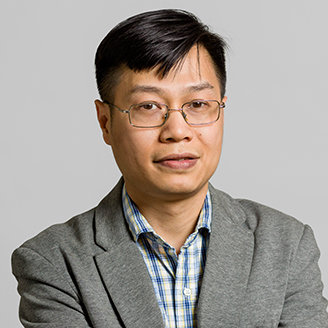 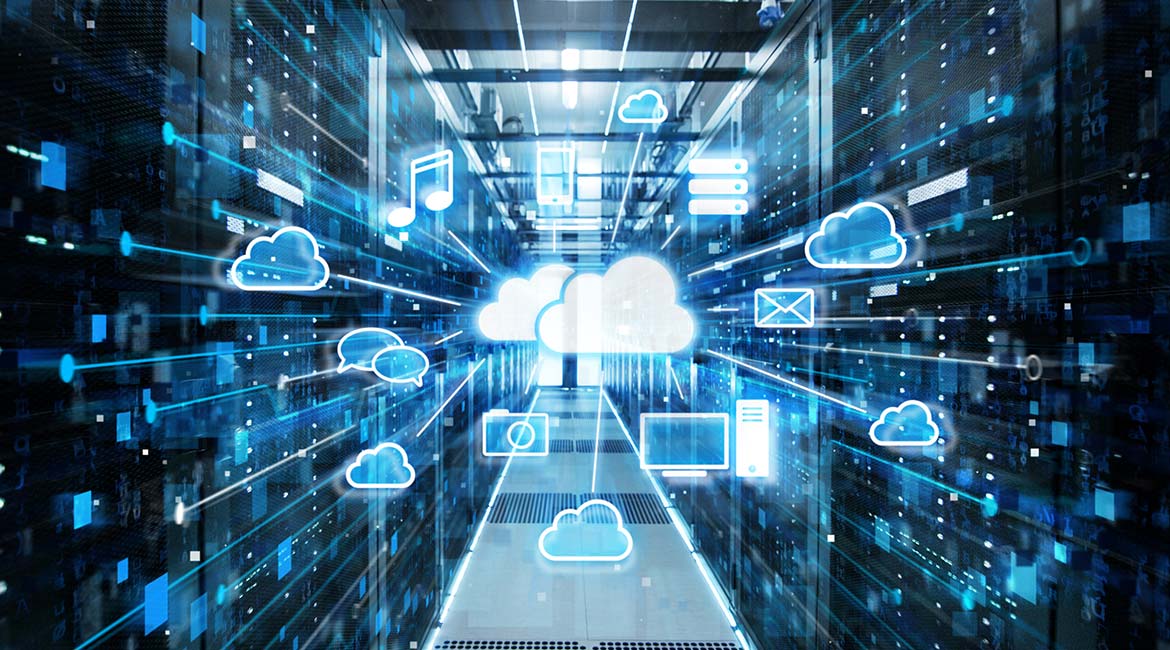 The emerging paradigm of the Network Function Virtualization (NFV) technology promises to offer an efficient solution for optimized service deployment in the cloud computing environment, thanks to its ability to add or remove virtual resources dynamically when there is a change in workload. Nevertheless, telecom providers are still facing a challenging issue in efficiently adopting NFV to deploy the Web Real-Time Communication (WebRTC) service on top of the IP Multimedia Subsystem (IMS). This article discusses a virtualized interworking system between IMS and WebRTC from the perspective of architecture, and a method to allocate resources optimally considering its constraints, namely Quality of Service (QoS) requirements. The improvement in service costs of the proposed solution is validated on a large scale by simulation and on a small scale by the testbed we developed.

In a nutshell, Network Function Virtualization (NFV) enables network services to be provisioned via software-based network functions and network elements—bridges, routers in general-purpose servers—instead of using specialized (and costly) hardware. Adopting an NFV paradigm helps network operators avoid many issues, i.e. space to install new physical servers, skills to design, operate, and manage complex hardware-based infrastructure. It is therefore understandable that NFV has received a great deal of attention from telecom operators, especially when the telecom industry is already in a precarious position—with many markets near the saturation point—and face both increasing supply (new operators, so-called OTTs etc.) and flat or declining demand for basic telephony and messaging services.

As an effort to accelerate the adoption of NFV in practice, the problem from a resource allocation perspective has received a lot of attention from both academic and industrial communities. In a study entitled “NFV-based Architecture for the Interworking between WebRTC and IMS,” published December 2018 in IEEE Transactions on Network and Service Management [1], researchers at the Synchromedia laboratory presented a solution to the problem with an NFV-based architecture and an analytic system model. They focused on the interworking between IP Multimedia Subsystem (IMS) and Web Real-Time Communication (WebRTC). The first is designed to integrate with a high-quality network of telecommunication carriers for pervasive data access to Internet services. The latter aims for real-time communications in the Web environment. Similar to NFV, WebRTC is also interesting to telco service providers due to its ability in expanding the number of potential endpoints for multimedia sessions.

The European Telecommunications Standards Institute (ETSI) Management and Orchestration (MANO) architectural framework describes the functional blocks, data repositories and interfaces in orchestrating virtualized infrastructures, network functions, and services. This architecture, however, cannot fulfill all requirements of an interworking service like that between IMS subscribers and WebRTC users. The proposed architecture in the paper is based on the design of a 5G OS reference architecture [2], detailed in Figure 1, with the 5G OS overall design on the left side and the specific functional components for the interworking scenario on the right side.

The author considers three aspects, each represented by either problem constraints or objectives, which are:

In order to obtain an optimal resource allocation scheme, a Markov-based approximation framework (MARA) was adopted as it can solve combinatorial network problem. The idea of this method was to consider each candidate solution as a state and to construct a Markov chain in which stationary distribution is known and converges toward the optimal solution.

The advantages of the NFV-based architecture and proposed method in providing a high-quality interworking service between IMS and WebRTC are illustrated via both simulation and experimental results under various settings. We compare the proposed MARA with a greedy approach, which is typically deployed in practice due to the simplicity in implementation. Accordingly, the resource is kept being allocated in a greedy manner as long as the system can perform interworking service.

Fig. 2 & 3 illustrate how the proposed Markov-based approach can provide an optimal resource allocation scheme given different levels of service demand (represented by parameter ƛ) from which, the overall system cost is reduced. 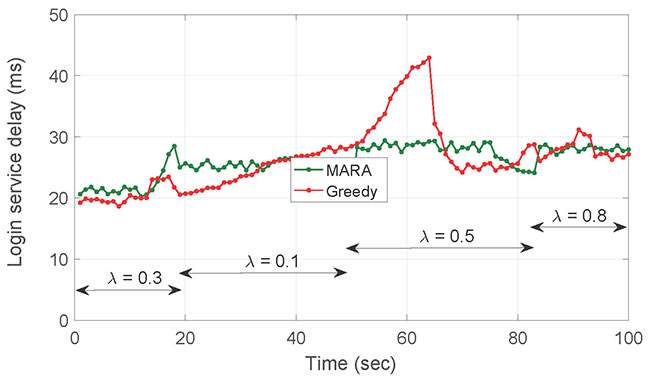 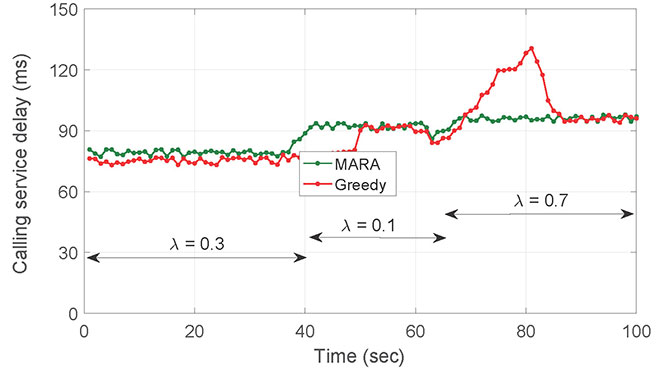 In Fig. 4, the cost incurred by the proposed approach is always less than when using a greedy algorithm. As the message arrival rate increases (meaning that service demand is high), the greedy approach is much slower than MARA in allocating enough resource and, as a result, causes a higher possibility of violating the Service Level Agreement as well as increasing cost. 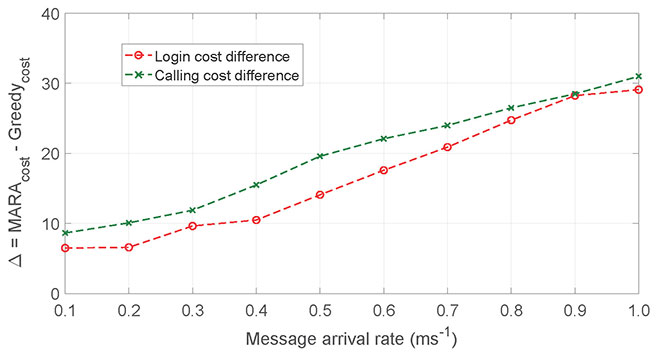 The results shown in Fig. 5 regarding the amount of allocated resource are aligned with the observations on the system cost. 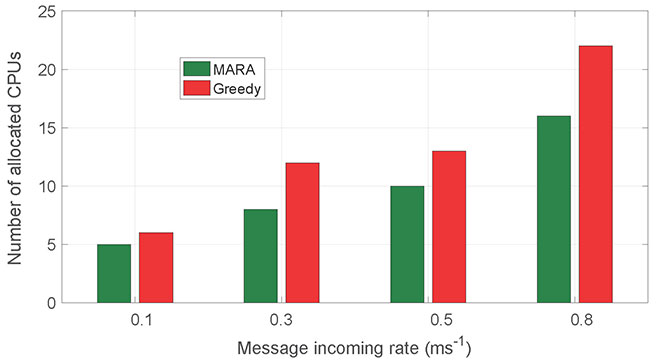 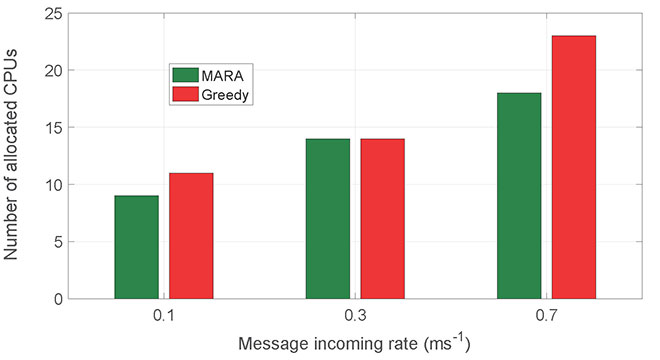 In this study, a detailed NFV-based reference architecture at a functional component level and an optimal resource allocation method have been illustrated. The architecture designed is based on a 5G Operating System architecture with respect to the heterogeneous requirements of different providers, domains and the adaptation to any change in IMS or WebRTC specifications. Moreover, a real-time inter-domain algorithm (MARA) to optimally allocate resource while reducing service cost is presented. The algorithm has been fully implemented and evaluated via both simulation and experimental settings. The results show that deploying MARA for the interworking IMS <-> WebRTC service can save up to 19% in service cost depending on the service, i.e. login or calling, and its demand.

Kim Khoa Nguyen is a professor in the Department of Electrical Engineering at ÉTS and the Synchromedia laboratory Vice-Director. His research interests include cloud computing, network virtualization and data center architecture.