The featured image was bought from istock.com and is protected by copyright.

Many may find it an exaggeration to say that pollution is the bane of city living. And yet, in 2016 the World Health Organization found that 92% of the global population breathes contaminated air. The consequences are clear, including higher rates of disease and death among the elderly, people with respiratory problems and young children.

What makes the situation doubly challenging is that air pollution is nearly invisible, with no trace, colour or odour, but it’s everywhere. Insidious harmful substances are all around us, even in Quebec’s cities! This finding spurred Darine Ameyed and the young team at NyX-R, an organization that she founded, to search for solutions for improving and preserving the province’s environment—and for protecting our way of life.

These solutions will be developed and tested at the Open-Air Smart Living Lab, founded in 2016 by Videotron, Ericsson, the École de technologie supérieure (ÉTS) and the Quartier de l’innovation (QI), before being implemented on a large scale.

UNDERSTANDING WHEN AND HOW TO CHANGE HABITS FOR A BETTER FUTURE “Located in the heart of the Quartier de l’innovation, the Lab offers testing in real-life conditions of technological applications designed to improve everyday concerns and quality of life for the average citizen,” says Serge Legris, Vice President and Chief Technology Planning Officer at Videotron. 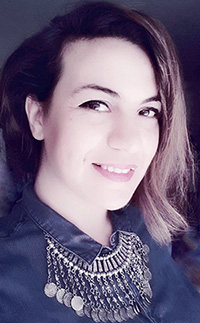 Darine Ameyed, a postdoctoral fellow at ÉTS, is specifically interested in air pollution. She and the team at NyX-R have joined forces with Synchromedia-Lab to create technology that collects real-time data.

“We realized that Montreal only has 13 air quality sampling stations and that these stations are large, expensive to operate and often experience lengthy service outages,”explains Ameyed. This left her wondering how they could track pollution more effectively to promote better behaviours and create new solutions for fighting contaminants.

“As long as people can’t see the pollution, it will be hard to educate them. Urban pollution isn’t just the by-product of industrialization; it’s also caused by poor urban management and unwise behaviours,” says Ameyed. She hopes that collecting data more effectively and sharing the information with the public will prompt people to change their habits for the better.

“We’ve managed to reduce the size of air pollution analysis stations so that they’re just the size of a smart phone, and these devices can record and transmit information in real time using 5G.” This is a major advancement because it allows for instant pollution mapping. By collecting environmental data in real time using an analytical platform, each individual will soon be able to understand how and when they can make changes in order to make a difference.

“If collected data indicates that a specific urban area is polluted from 7 a.m. to 8:30 a.m. on Thursday mornings due to traffic congestion, people will be able to seek solutions. For example, urban planning might be adjusted around the area,” says Ameyed. “Some buildings could also be equipped with a special structure that absorbs dust particles that are harmful to human health.” On a smaller scale, real-time analyses of indoor air quality in an apartment could point to unhealthy behaviours. “We know that there is an environmental impact to everything we do. By raising people’s awareness of their own living conditions, we can motivate them to make changes.” This could include replacing materials within the home, changing consumption habits or choosing to travel by scooter, Bixi or public transit instead of taking their car on Thursday mornings between 7 a.m. and 8:30 a.m. if that’s when air pollution spikes due to high motor vehicle usage.

The sensors will eventually be dispersed throughout the city to ensure better environmental monitoring and to detect and risks to the health of the local community, wildlife and plant species. “This system will help guide the decisions made by urban planners who presently rely on intuition rather than real needs and real data.”

HUMAN-SCALE TESTS TO IMPROVE THE LIVES OF EVERYONE 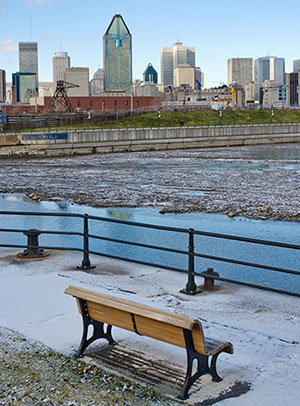 The Lachine Canal in Montreal

While Darine Ameyed is focusing on air quality, some of her Synchromedia-Lab colleagues are zeroing in on water. The Lachine Canal is a great place for them to work. They have placed sensors along the body of water to observe the impact of human activity and natural phenomena such as rain or snow melt.

“The Lab is unique because it brings together the knowledge, expertise and technology needed to implement various components of smart living. 5G, artificial intelligence and the internet of things may seem futuristic, but they’re actually within reach and can be used in infinite ways,” said Serge Legris.

Being able to test ideas using human-scale sensors that transmit information in real time is what will enable Darine and her colleagues at the Lab to find the solutions to society’s problems. “Improving air and environmental quality is a way to improve comfort and health in smart spaces.” These efforts will ensure a better future for the citizens of Quebec and the entire planet.