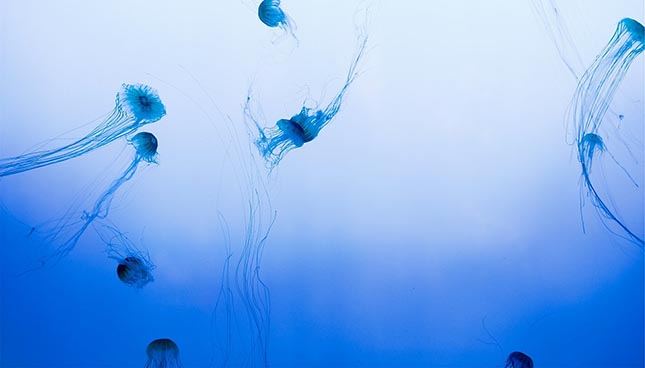 Soft robotics is a new and growing field. The challenges today are to develop devices for various medical fields. Rapid prototyping and the creation of smart soft materials, such as electroactive polymers, have brought about the recent development of autonomous bionic robots with increasingly complex and precise movements. A team from the Massachusetts Institute of Technology (MIT) designed a robot whose materiality could inspire the development of various underwater military applications.

The MIT engineers made transparent gel-based robots that move when water is pumped into their internal structures. These small creatures can perform several quick and energetic tasks, such as kicking a ball under water, or grabbing and releasing live fish.

Design of a Bio-inspired Hydrogel-based Structure

The robots are made entirely of hydrogel, a hard, rubbery, almost transparent material, which is mostly composed of water. They have tentacle-like arms; each limb is an articulated hollow hydrogel shape connected to a rubber tube. When water is pumped into these robots, they rapidly expand from the inside in bending or stretching movements, giving them a startling hyper-realistic appearance. It is obvious that this type of movement was inspired by the swimming motions of nautilus, cnidaria and cephalopods. These animals move forward by sucking in water. The propulsion movement is a result of their very flexible and resistant gelatinous substance. For example, the bodily substance of the jellyfish comprises 98% water. This is how the jellyfish can move without spending much energy because it has almost the same density as water. In fact, it incurs less resistance during propulsion.

To create hydrogel, the MIT team was inspired by the structural properties of mesoglea, a transparent gelatinous substance of the leptocephalus (eel larva) and the jellyfish. Over the past five years, the researchers made several types of hydrogels by varying combinations of water and different polymers. They also provided the hydrogels with adhesion properties allowing them to adhere to different surfaces such as glass, metal, ceramic and rubber. They succeeded in creating strong, peel-resistant materials. Their study on material design specific to soft robots and sprawling structures is entitled: Hydraulic hydrogel actuators and robots optically and sonically camouflaged in water, and was published on February 1, 2017, in the Nature Communications science journal. Researchers participating in this study were: Hyunwoo Yuk, Shaoting Lin, Chu Ma, Mahdi Takaffoli, Nicolas X. Fang and Xuanhe Zhao. In addition to the hydrogel chemical composition, the research determined the 3D printing and laser cutting techniques required to manufacture the tentacle-like hydrogel robot structures.

To operate or move the limbs, the team used syringe pumps to inject water into hollow structures. The water flow enables the limbs to coil or stretch quickly, depending on the robot’s overall configuration. Heading the research, Xuanhe Zhao, associate professor of mechanical engineering, and civil and environmental engineering at MIT, together with his student Hyunwoo Yuk discovered that they could produce rapid and strong reactions by pumping water, helping a hydrogel robot generate a force of a few newtons in one second.

The tests performed on these robots demonstrated that they are capable of withstanding 1000 cycle movements without breaking or tearing. They also illustrate that the proposed robot designs, when placed in basins with different coloured backgrounds, are all almost imperceptible. By measuring the hydrogel robots’ acoustic and optical properties, the researchers also noted that they are almost equal to those of water, unlike rubber and other materials commonly used in soft robotics.

The near-similarity of this hydrogel to transparent mesoglea makes it possible to produce avatars with excellent optical and sonic camouflage properties for espionage and counter-espionage in aquatic environments. Yuk and Zhao are currently working on adapting soft robots to medical applications. Hydrogel’s biocompatibility, flexibility and aqueous structure make it possible to manufacture tools with safe interfaces, suitable for the most fragile of organisms. Moreover, when the researchers experimented capturing a fish, they noted that a classic robotic arm would have crushed it.

This research was funded in part by the Office of Naval Research, the MIT Institute for Soldier Nanotechnologies, and the National Science Foundation.