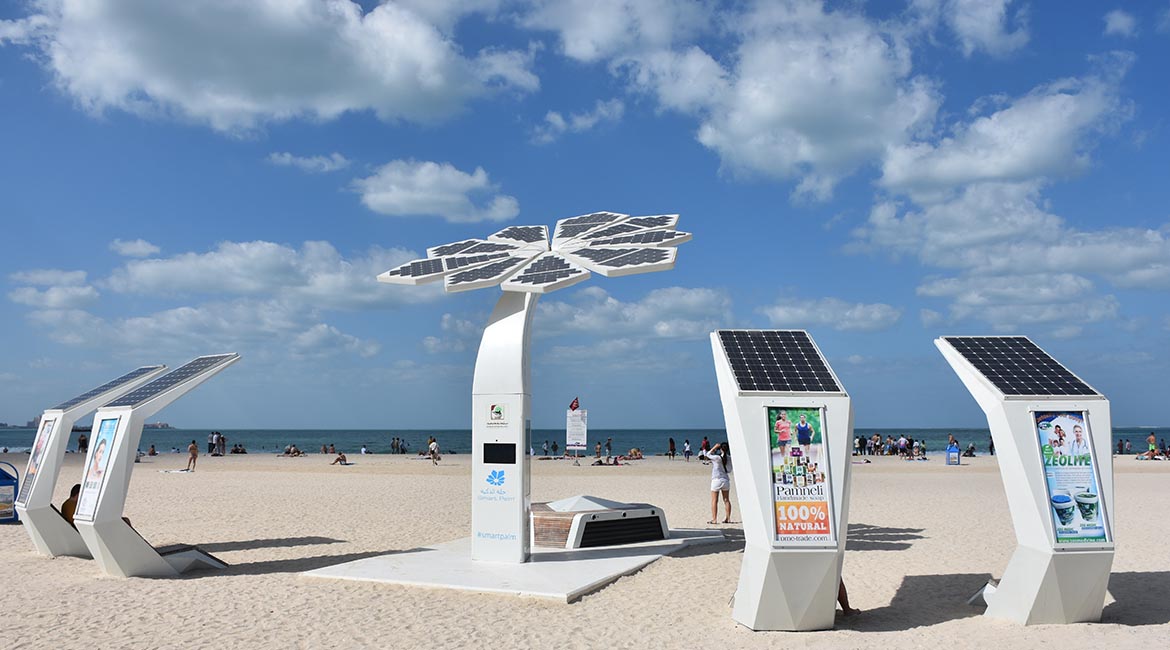 The featured image is from Live Internet, source. No known copyright restrictions.

In just a few decades, Dubai has evolved into a bustling metropolis and one of the most modern cities in the world. This amazing evolution earned Dubai the right to host the 2020 World Expo with the theme “Connecting Minds, Creating the Future“.

In order to further modernize Dubai, new types of palm trees have appeared in the city. These are not typical trees with lovely green foliage; their leaves are made of solar panels! In fact, Dubai now has its first smart palm trees called Smart Palm. Smart Palms include six different features: solar panels, a Wifi source, an emergency system, touch screens, info screens and charging stations.

The photovoltaic solar panels have an efficiency of 21%. They are positioned on top of the Smart Palm leaves and on station rooftops. These locations maximize sunlight absorption during the day.

Smart Palms provide Wifi to all, for a fee. They are also equipped with an emergency system consisting of a 360-degree camera and a panic button. Multilingual smart touch screens allow access to different applications. Other screens are installed on the Smart Palm structure—billboards or information panels showing daily news from the government or other public messages.

Smart Palm solar panels can power not only the screens on the main structure, but also charging stations for cell phones and tablets. Electronic devices can be recharged while relaxing at the rest points. Indeed, it is possible to sit under the palms and be shaded from the hot sun. On the other hand, this may be a short break: the company claims that its charging stations can recharge electronic devices 2.5 times faster than usual!

During the day, Smart Palms capture the sun’s rays, used for their overall operation and device recharging. But some of the energy is also stored, turning Smart Palms into street lamps in the evening.