Felix Chenier Author profile
Félix Chénier is a professor at the Université du Québec à Montréal with the Department of Physical Activity Science. He was a postdoctoral researcher at the CRIR and a R&D engineer with the LIO Laboratory at the ÉTS.
Research laboratories : LIO – Imaging and orthopedics research laboratory 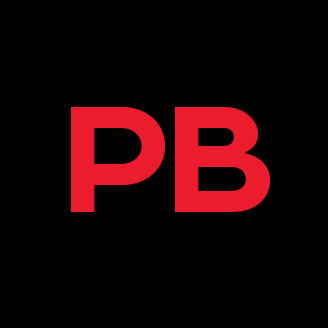 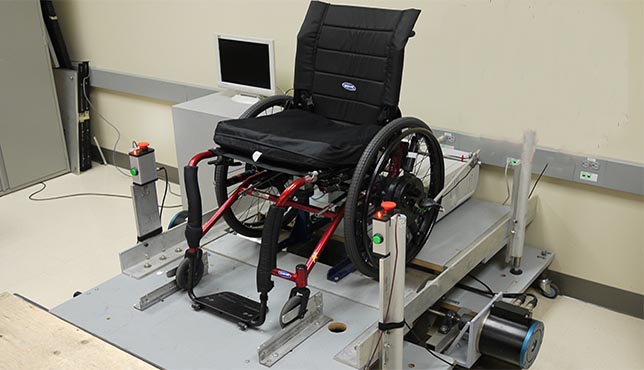 WHEELCHAIR propulsion is a tedious activity that presents a high risk of long-term injuries and pain to the upper body [1]. To understand and reduce the impact of this activity on the upper body, biomechanical analysis of wheelchair propulsion was performed extensively during the last decade, mainly on a straight line, either on level-ground, ramps or cross slopes [2], [3]. This being said, turning is a significantly different task than propelling in a straight line. For example, to perform a left turn, the left hand stops propelling and slows down the left wheel, while the right hand compensates with higher propulsion forces [4]. Currently, little is known on the biomechanics of turning maneuvers, despite their recurrent use in tight spaces.

Stationary wheelchair ergometers such as treadmills or rollers allow us to simulate the propulsion conditions with a better reproducibility than on the ground while requiring less space, and thus are extensively used in the studies of wheelchair propulsion.

Treadmills have the advantage of reproducing accurate propulsion conditions on different ramps and cross slopes, whereas roller ergometers are more suitable to user-selected speeds and may simulate different rolling resistances [2], [5]. Turning maneuvers are, however, impossible on treadmills. Moreover, whereas current roller ergometers simulate the total wheelchair–user’s mass by inertial rollers and the rolling resistance by breaks [6], [7], [8], [9], [10], [11], [12], [13], [14], the wheelchair–user system’s moment of inertia and the orientation of the caster wheels are not taken into account, despite their important contribution on the behavior on a real wheelchair [16]. Consequently, no stationary ergometer can currently reproduce the wheelchair propulsion on curvilinear paths.

Recently, a new dynamic model of the wheelchair–user system propelled on straight and curvilinear paths was presented and validated [15]. This model is a nonlinear estimator of the wheels’ velocities as a function of the moments applied on the rear wheels by the user. Due to its nonlinear nature, it would be difficult to implement this dynamic model on an ergometer using only mechanical parts. However, haptic robots allow us to generate large ranges of force–velocity interactions at the robot–user interface [16]. Thus, a wheelchair ergometer could be designed as a haptic robot for which the robot–user interface is the wheelchair’s hand rims. 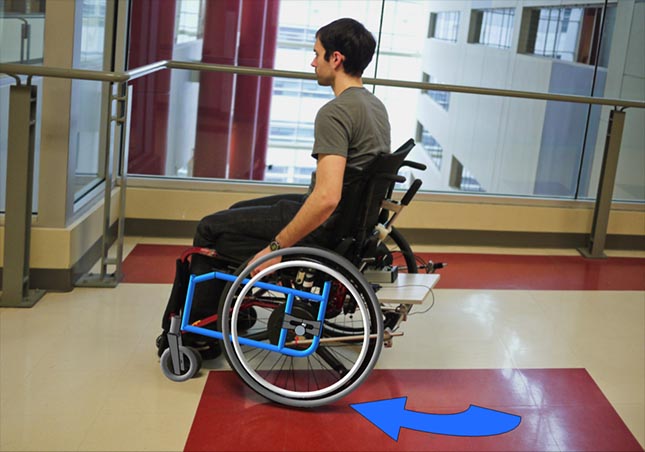 Wheelchair propulsion dynamics should be evaluated on curved paths as well as on straight paths. Source [Img1]

In this article, we present a new wheelchair ergometer designed as an admittance-controlled haptic robot, which reproduces the wheelchair–user model described in [15] in real time, thus enabling straight and curvilinear propulsion.

The user’s wheelchair is placed on two independent motorized rollers (fig. 1). Contrarily to other ergometers, the rollers are empty so that their moment of inertia is voluntarily minimal. The inertial effect of the wheelchair during propulsion is instead simulated, and is provided by the motors. 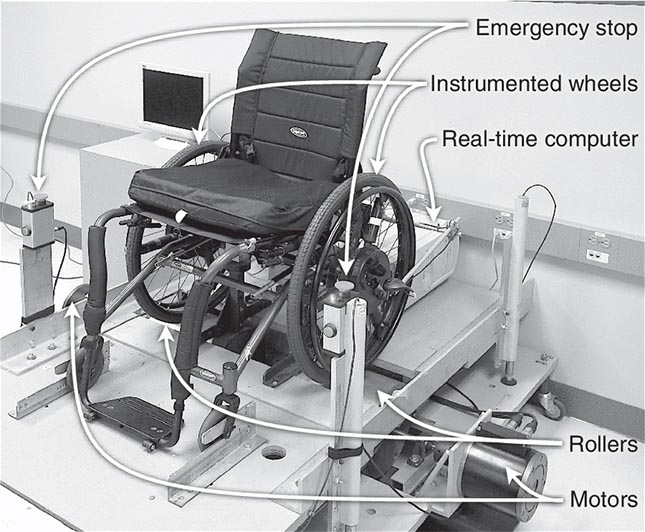 As direct-drive motors provide high torques at low velocities, their action can be applied directly to the rollers without a timing belt or additional gearing. The rollers’ angular position is measured by sin/cos encoders with a high resolution. As a force sensor, the rear wheels of the user’s wheelchair are substituted by two Infrared SmartWheels that measure in real time the forces and moments applied by the user on the rear wheels.

There are two main strategies in haptic control:

Impedance control is more popular because force sensors are not necessary: The motors generate feedback moments as a reaction to displacements of the wheels. This strategy is well suited to simulate low-inertia objects with a highly back-drivable interface, which means that the wheels must be easy to move when no feedback moments are applied [16], [18]. A wheelchair–user system has, however, a high inertia. Moreover, Harrison et al. [10] found that to fulfill the high back-drivability requirement, frequent realignments of the motors, rollers, clutches, and brakes were needed. Our prototype does not contain clutches or brakes, but the motors and rollers still need to be well aligned to reduce the friction. We found that a more adapted solution was to use an admittance control, which is more suited to the simulation of high-inertia objects with hardly back-drivable interfaces [16], [20]. For this control strategy, the motors adjust their velocity as a reaction to the moments applied on the wheels. Fig. 2 shows a top-level schematic of the admittance control used by the proposed wheelchair ergometer. It is composed of two main parts: the virtual environment (VE) and the haptic interface.

) that correspond to the applied moments. This is also the function of the dynamic model of the wheelchair–user system presented in [15]. This model, for which a free-body diagram is given in Fig. 3, was validated with ten subjects and was found to be twice as accurate as the model of a standard independent-rollers ergometer for the continuous propulsion of a wheelchair on curvilinear paths. Therefore, it will be used as the ergometer’s VE. 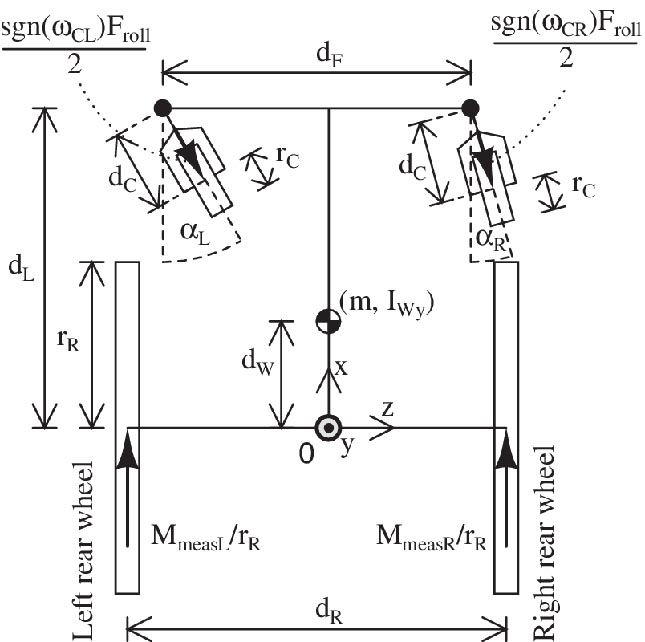 The haptic interface is the link between the user and the VE. Its role is to match the measured moments (

) to the applied moments (

), and the real wheels’ velocities (

) to the virtual wheels’ velocities (

). Fig. 4 shows a block schematic of the proposed haptic interface for one wheel; the interface is duplicated for the other wheel. The Real world part models the real velocity

of the wheel as a response to the motor’s current

and to the perturbation

applied by the user. The Real-time computer part is mainly a velocity compensator. A proportional-integral (PI) compensator is used to eliminate the steady-state error. 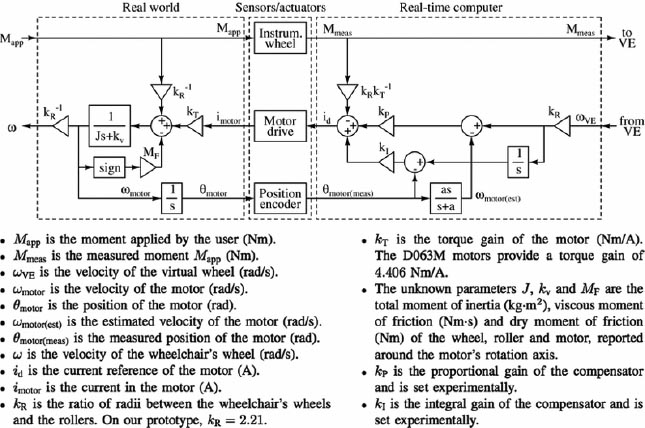 Fig. 4. Block schematic of the haptic interface for one wheel. Source [Img1] 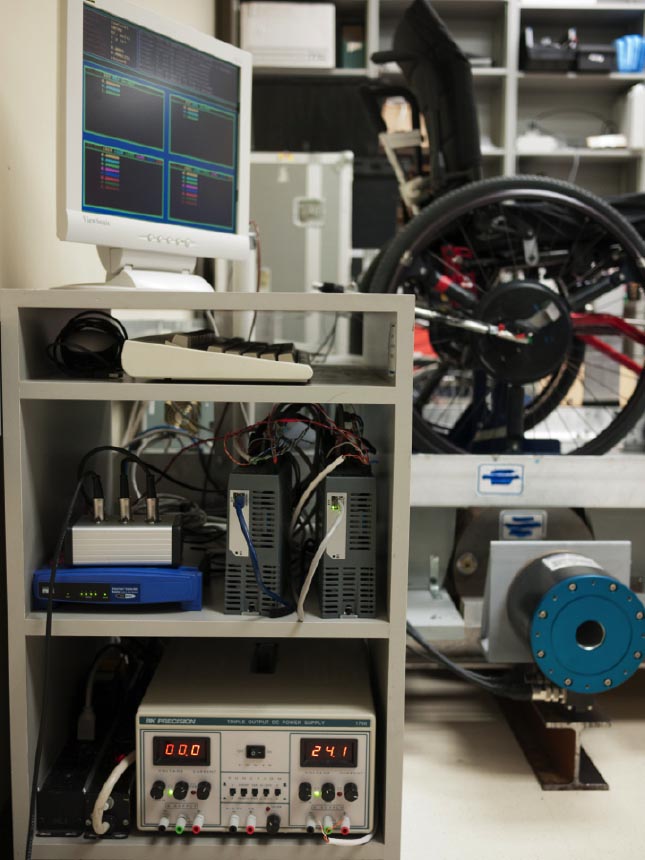 This new wheelchair ergometer has twice the accuracy of a standard independent-roller ergometer for propulsion on curvilinear paths. Special attention should be put on the transmission links between the motors and the rollers in order to limit their elasticity and eliminate the backlash. We also found that the accuracy of the ergometer is limited not by the device itself (RMS error of less than 0.9 %), but by the simulated VE (6–11% RMS error depending on the wheeling trajectory). Therefore, future developments on the ergometer’s accuracy should focus on improvements of the dynamic model of the wheelchair–user system. Finally, the choice of an admittance control not only allows the haptic interfaces to be hardly back-drivable, thus reducing the maintenance needs, but also bounds the stability of the ergometer to very low inertial parameters (

). Based on these minimal values, any possible values for the VE’s parameters will ensure the stability of the ergometer. This new wheelchair ergometer provides a haptic feedback that is more representative of wheelchair propulsion, and that can be modulated on the fly.

To get more information about this new wheel chair simulator, we invite you to read the following research article:

Félix Chénier is a professor at the Université du Québec à Montréal with the Department of Physical Activity Science. He was a postdoctoral researcher at the CRIR and a R&D engineer with the LIO Laboratory at the ÉTS.

Pascal Bigras is a professor in the Department of Automated Manufacturing Engineering at the ÉTS. His research interests are robust, optimal, robotic, force and position control as well as modeling, simulation and electromechanical systems.