Shocking the Salt Out of Seawater With Electrodialysis - By : Luis Felipe Gerlein Reyes,

Shocking the Salt Out of Seawater With Electrodialysis 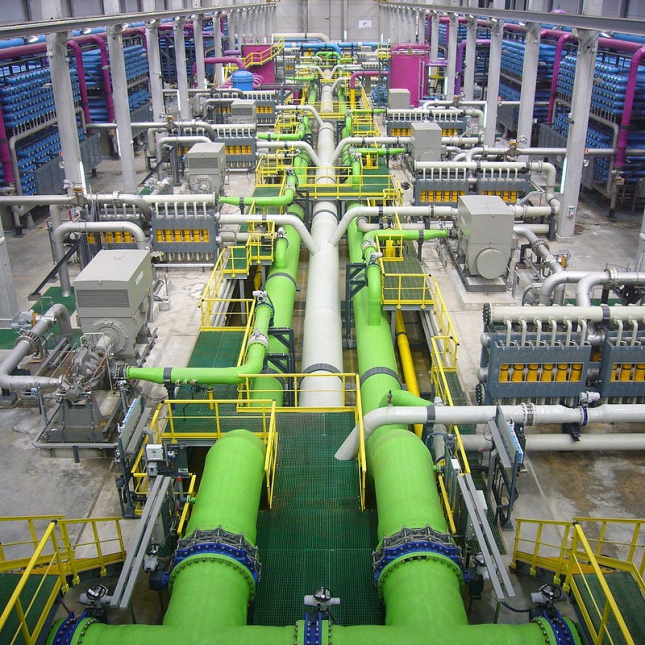 One of the biggest problems in modern day society is water treatment. Whether for desalination of seawater or treatment of waste water coming from our cities and industrial processes like oil fracking, we are faced with a problem with important social, cultural and monetary implications.

We can only dream of a low cost, efficient way to convert seawater, brackish or waste water into clean and fresh water suitable for human consumption. There are numerous approaches, from water boiling to reverse-osmosis to electrodialysis. 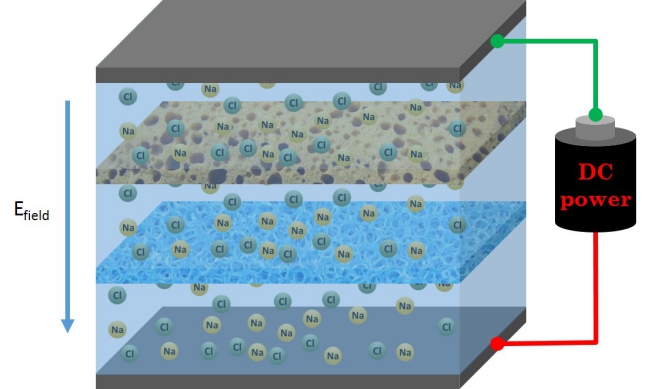 Figure 1. Schematic of Electrodialysis process. The water flows through the reactor while in the presence of an electric field. The salt ions will be accelerated on the direction parallel to the electric field and will be captured by the membranes in between both electrodes leaving the water almost free from impurities.

All these methods for water treatment work but with limitations. Boiling the salt out of seawater is a simple way but the cost of heating large bodies of water makes this alternative almost impossible to apply. Reverse-osmosis separates the water molecules from bigger particles by using specialized filters. As with any filter-based system, it will eventually clog limiting the capacity of the system and its uninterrupted operation. Electrodialysis traps the salt ions into ion-exchange membranes in the presence of an electric field but it requires flowing the water through the membranes and suffers the same complications as reverse-osmosis.

A team of researchers at MIT perfected a new system that employs an “electrically driven shockwave within a stream of flowing water, which pushes salty water to one side of the flow and fresh water to the other, allowing easy separation of the two streams” according to MIT news. The new system has been called “shock electrodialysis” and once the two streams get separated they can be funnelled into independent tubes.

What makes this system better is its operation mechanism. The system utilizes a porous material made of tiny sintered glass particles, called Frit. On both sides of this material there are membranes or electrodes that help with the application of the electric current in the system. But here is the mechanism differs from electrodialysis: applying the current to the flow of water the salty ions are “pushed” to once side of the pipe, creating regions with enriched or depleted salt concentration in the water.

Increase the current more and this will create a shockwave between these two zones, discharging the built-in electrical potential in the system and physically separating the flow into two independent streams that can be collected effortlessly. It is important to note that although the porous material is covered by conducting membranes, the water flows across the membranes and not through them rendering the separation process “membraneless” as stated by the authors. This fact alone reduces the risk of clogging and the operation costs. 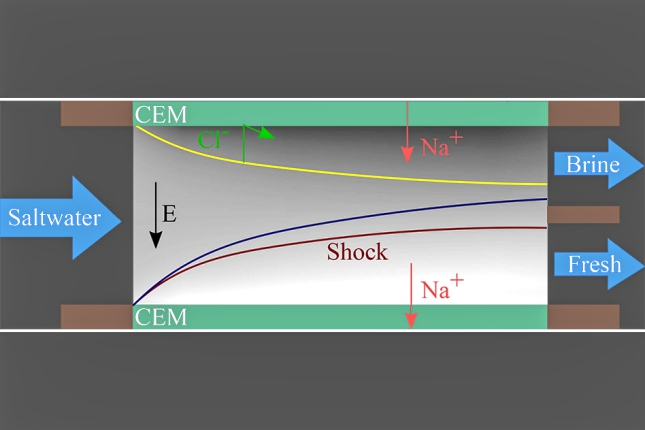 In here, “the shockwave (red line) is generated in salty water flowing through a porous medium, with a voltage applied to membranes (green) at each side of the vessel. The shockwave pushed the salt ions off to one side of the flow, leaving fresh water at the other side, where it can be separated out.” Taken from MIT News.

Similarly, the extracted salts will not have to go through the membranes, they just have been moved aside. Even more, by using such strong current in the system it will be possible to clean and sterilize the water from other contaminants like bacteria that are highly susceptible to strong currents.

So far, in the lab results obtained, the group managed successful separation of sodium, chloride and other ions from a feed stream, removing more than 99% and up to 99.99% over various electrolyte concentrations, 1, 10, 100 mM. The authors added also, this system could be scalable while maintaining low-costs of operation for processes of desalination or water purification.

Initially this system might not compete against industrial-sized electrodialysis systems, but it could find its application in smaller portable devices that can be transported to disaster zones or remote areas with non-existent fresh water distribution systems.

This study can be found at, source.