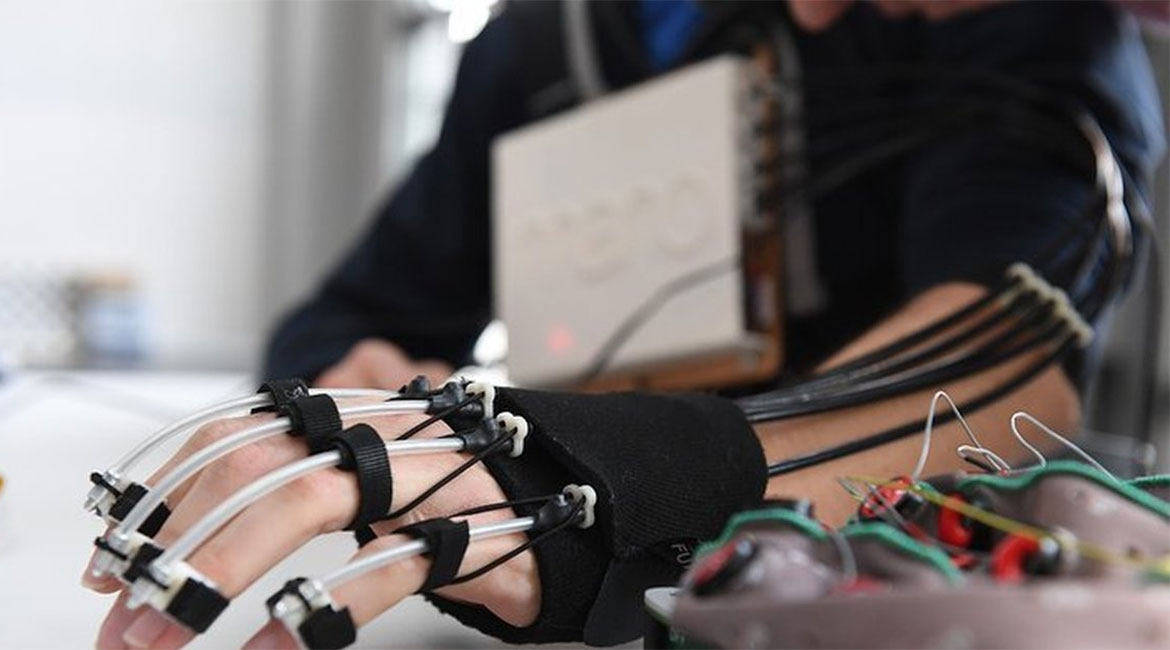 Exoskeletons allow people with reduced mobility to perform tasks that would otherwise be impossible, and help increase their physical abilities. They are constantly being improved to offer maximum comfort and practicality.

Researchers at the École polytechnique fédérale de Lausanne have developed an exoskeleton hand, mano, controlled by brainwaves. The latest results from their studies are published in the January 2018 issue of IEEE Robotics & Automation Letters. According to the developers, this device will help people with disabilities in their daily lives by allowing them to grasp objects using thought.

Researcher Luca Randazzo explains: “The main novelty is that it combines flexibility, portability and feedback, all in a device controlled by brain waves.” The advantage of the exoskeleton is that it is lightweight and easy to wear and to adjust (see Figure 1). It attaches with Velcro strips at the joints, leaving the palm free. Metal wires located on top of the fingers work like tendons. The wires are controlled by motors installed in a chest pack. The device can be adapted to different types of disabilities and the disabled person’s personal capabilities. For example, it can be controlled using the voice interface of a smartphone, eye movements, brainwave headphones, electromyography, and so on.

By equipping subjects with an EEG headset that measures their brainwaves while using the exoskeleton, scientists discovered that hand movements activated by the device generated brainwaves typical of a normal limb. The researchers found that exoskeleton-controlled hand movements combined with a user-driven brain-machine interface generate very specific signals that could facilitate control of the device.

The part of the brain that controls body movements is called the motor cortex and is divided in two: the right side and the left side. Controlling the left hand is mainly done by the right-sided motor cortex, and vice versa. This property of the nervous system is called contralateral control. Indeed, contralateral brainwave activity was observed in people who passively experienced exoskeletal movements. However, signals appearing on the same side as the active hand were also observed in subjects who were asked to control the exoskeleton using brainwaves. Scientists believe that the brain activity created by combining voluntary control and consistent feedback from the device should be further studied to improve the exoskeleton.

This device is designed to assist disabled people in their daily lives by helping them to perform tasks at home. As Luca Randazzo puts it, “In the future, by combining portable devices and powerful human-machine interfaces, this type of system could offer practical and beneficial assistance on a daily basis.”