Rehabilitation of Lower Limbs with a Robot - By : Guy Gauthier, Maarouf Saad, 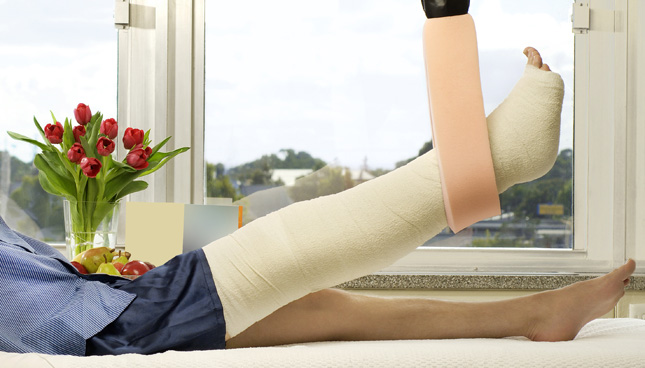 On November 25, professors Guy Gauthier and Maarouf Saad, from the École de technologie supérieure (ÉTS), in Montreal, presented their research on exoskeletons. This article summarizes the first part of this presentation, Guy Gauthier’s lecture, that focussed on the use of a robot for the rehabilitation of lower limbs. A future article will introduce the presentation of Maarouf Saad, who addressed the rehabilitation of the upper limbs.

Since the last decade, the number of disabled people has been increasing at an alarming rate. The elderly often suffer from partial or total loss of functionality in the upper or lower limbs. According to the Institut de la statistique du Québec (ISQ), people aged 65 and over will make up 28.5% of the population in 2061.

A loss of functionality can also be the consequence of a stroke, trauma, sports injuries, work-related accidents, or an injury to the spinal cord. For example, the Canadian Stroke Network reports that, every year, 50,000 Canadians have a stroke and 300,000 are living with the after-effects of a stroke.
The treatment is based mainly on rehabilitation programs.

These treatments involve physiotherapy with highly qualified personnel, and require a long term commitment. As the number of people needing such care continues to grow, applying robotics technology in these programs presents great advantages.

The main lower limb joints are the hips, knees, and ankles.

The hip movement has three degrees of freedom:

The knee has only one degree of freedom:

While the ankle has three degrees of freedom: 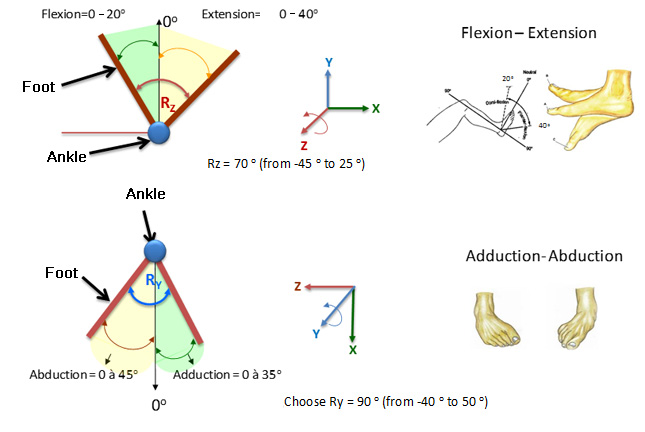 To reproduce these seven movements, a robot equipped with cables and motors was designed.

Presentation of the Proposed Solution

The developed robot has 8 cables with motors that adjust the lengths to reproduce the desired movement. To achieve the desired position of a leg, the robot calculates and adjusts the length of the cables in a way that the orthosis reaches a specific point in the space. These calculations are performed in a dynamic and continuous manner during a given movement.

The robot can be used in two different configurations. The first one, the supine position, allows the movement of one leg at a time in the seven degrees of freedom.

The second one, the standing position, mimics the walking motion. As both legs should be in motion, movement is possible with only three degrees of freedom; one for each of the main joints. 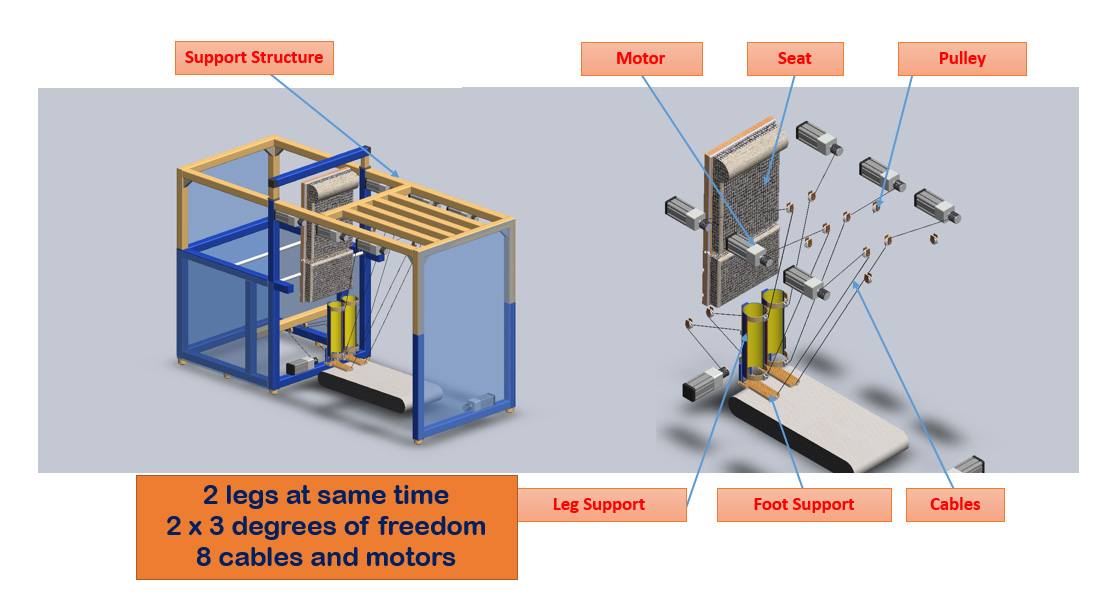 The leg and feet braces, as well as the areas where the cables are attached, change according to the configuration of the robot.

The proposed solution is being tested on “mechanical legs” to validate the operation of the robot and its movement control and tracking algorithms.  Another challenge under analysis is to find a simple way to allow a practitioner, with no knowledge in robotics, to program movements based on rehabilitation exercises that each patient must perform.

Indeed, the main use of the robot will be the rehabilitation of the lower limbs through repetitive exercises that will be programmed into it. This will allow the patients requiring rehabilitation to perform active and passive exercises, and the practitioner to evaluate their progress through measurements taken by sensors.

A medium / long term objective of the project, when the design of the robot is sufficiently mature and robust, will be to test it on real patients. For now, it has not yet been proposed to health facilities such as hospitals and research centers in rehabilitation. However, one of the project collaborators is Philippe Archambault, a professor at the School of Physical and Occupational Therapy at McGill University, and a researcher at the Center for Interdisciplinary Research in Rehabilitation of Greater Montreal. Consequently, it is likely that a first contact with the health community will be made through this Research Center in order to assess the level of interest in this robotic technology from people in the field of rehabilitation.