Rehabilitation of the Former Dow Planetarium: From Creativity to Innovation - By : Substance,

Rehabilitation of the Former Dow Planetarium: From Creativity to Innovation 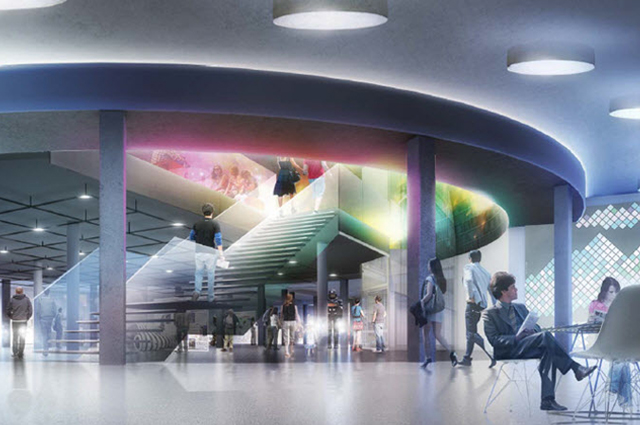 Ever since his appointment as the Director of Montreal’s Innovation District (known locally as the Quartier d’Innovation or QI), Damien Silès, has been breathing new life to this “innovation ecosystem.” Substance ÉTS sat down with Silès to talk about the various projects under his supervision, including the future of the former Dow Planetarium, which promises to be one of the highlights of 2015.

Once rehabilitated, the former Dow Planetarium will act as the gateway to the Innovation District and become a “visual signature of innovation.” Located just east of Peel Street between Saint-Jacques and Notre-Dame—the heart of the Innovation District—the building was recently handed over to École de technologie supérieure (ÉTS) by the City of Montreal.

How to revive this historic landmark which has welcomed thousands of Montrealers over the years?

The idea is to design a creative space, a “house of innovation.” Silès makes it clear that it is indeed a “house” because it is a living environment and not a commercial or industrial area. In all, some 16,000 residential units will be built in the neighborhood, which is why all QI projects aim to foster a sense of community within the area and bring it to life.

Works at the old planetarium will begin in spring 2015 and are scheduled to last 10 to 12 months. The building’s interior will be renovated and the current parking lot will be turned into a park. Daniel Lamarre, president of Cirque du Soleil and member of the QI’s Board of Directors, contribute to the project, with a particular interest in the park’s design.

Very few changes will be made to the building’s exterior—except the entrance, which will be relocated to Notre-Dame Street—with a view to preserving the heritage of the site.

The ground floor will include a conference hall for national and international events (such as symposia or summer school programs) on innovation. Another space, called the Window, (“La Vitrine” in French) will house various innovative products made in Montreal or elsewhere in Quebec. According to Silès, visitors will be able to “touch, test, buy or submit feedback on these products.” The Window will not be static—quite the contrary! “We want the Window to continually showcase new things,” said Silès. Thus, each innovative product will only be featured for a predetermined period of time.

Ultimately, the objective is to make innovation accessible to all!

The second floor dome will be a dedicated creativity hub for students and companies alike. As a one-stop shop for creative thinking and rapid brainstorming, it will help connect universities, artists, community members and businesses. Another initiative will involve setting up a public library with all the copyrights emerging from ÉTS, McGill and Concordia universities.

Work on this $10 million project is expected to be complete by the spring of 2016. Half of the cost will be financed by ÉTS and the rest from a private partner.

Innovation District: An eye on the future

The basic idea for the Innovation District was hatched in 2009 under the direction of ÉTS. McGill University soon came on board to create an ecosystem for social, industrial and cultural innovation that would ultimately benefit the development of the area.

THE FOUR PILLARS OF THE QI : A UNIQUE MODEL

Today, the objective of the Innovation District is to create seamless lines of communication between the universities behind the initiative. Silès clarified that as of early December, Concordia University has joined forces with ÉTS and McGill to develop the project.

Thus, the Innovation District will cast a wide net and link nearly 100,000 students, professors and researchers, all of whom are available to consult with the local community and businesses.

As mentioned earlier, several activities and QI Projects have been planned, including Biofuelnet Canada, 2015 C2-MTL, the development of Ingo II and III, and many more.

In addition, five projects were shortlisted during the Je vois Montréal event and will soon be initiated:

We can’t wait to see how these develop! Substance ÉTS will describe each project in greater detail in separate articles.

Of course, there are many more projects on the backburner. From a health kiosk, musical booth, or Techshop to drone races and gaming competitions projected on ÉTS buildings, there is plenty in store for 2015!

Standby for innovation on Substance ÉTS!