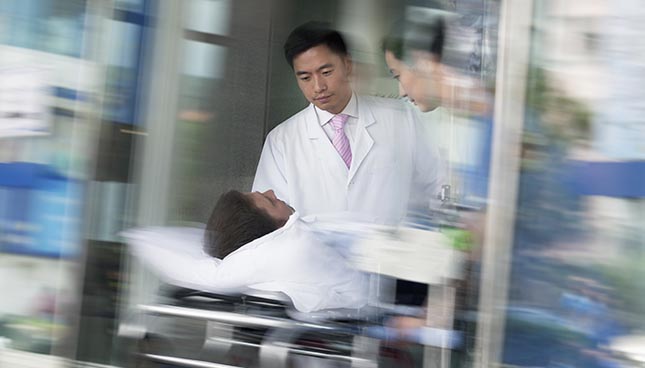 While the population of Quebec ages, the province's health care institutions face overcrowding in hospitals and observe a decline in the quality of patient service and in staff retention rates. In 2014, engineers using the Lean methodology – used in the industrial sector - implemented a program improving emergency procedures at the Réseau local of Baie-des-Chaleurs. This methodology produced process work flow modifications while changing the attitudes of its stakeholders.

Quebec health institutions are facing the same problems as all of the other G20 countries: aging populations, health system overloads, continual cost increases. It’s within this difficult context, among the most elderly populations in the province and a complex territorial organisation that the Maria Hospital, in Gaspésie, Quebec, found solutions to improve the service it provides to its clientele. Its management team wanted to accelerate the time spent in the emergency department, reduce the number of patients present for more than 24 and 48 hour periods, the delays and the hospitalisation rate.

In addition, the overwhelming pressures sustained by emergency personnel were significantly affecting their work organisation (Figure 1). It was becoming more and more difficult to fill emergency positions, the rate of absenteeism was significant, work accidents were on the increase and morale was low. It was a very disturbing trend, not only for personnel and unions, but also for the managers. Emergency room overflow was seriously affecting the patients but the impact on personnel was also far from negligible. On top of that, the negative aspects of these two situations were exacerbating one another resulting in a downward spiral which they were unable to reverse. 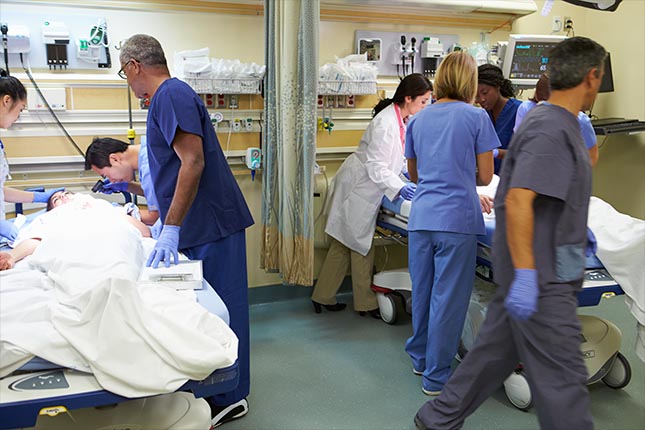 It was in this context that, several years ago. The former Baie-des-Chaleurs Social Service Centre, in Gaspésie, Quebec implemented an extensive emergency procedure improvement program based on “Lean” methodology which is increasingly being used within hospitals and other health organisations to improve internal processes.

In terms of physical organisation, the Maria Hospital is part of the Réseau local de la Baie-des-Chaleurs (formely Baie-des-Chaleurs CSSS) which covers an area of more than 200 kilometres along the Atlantic coast and serves a population of approx. 34,000 people. In order to meet the need, the Baie-des-Chaleurs CSSS has five local health centres (CLSC), two long-term health centres and the Maria hospital with its main emergency treatment facility (Figure 2). The CSSS also operates a second emergency facility in the Paspébiac CLSC, 90 km east of Maria. This emergency facility has only limited technical facilities and, after a preliminary examination, many patients have to be transferred to the main emergency facility to undergo more extensive tests and/or to receive specialised treatment. This considerably increases the congestion of their main emergency service department.

This methodology was inspired by the approach used in the industrial sector. An initial team was composed of the main interveners including the nurses, doctors and support personnel of both emergency facilities. Afterwards, a process map was created (Oliver and Létourneau, 2013). This map detailed the end-to-end treatment process used in both emergency facilities, the circulation between them, the hospitalisation and monitoring mechanisms and, finally, the release of patients and liberation of rooms.

The most significant impact of the process map was that it helped both the clinical and support teams realise that they were employing a “push” type paradigm. From the patient’s arrival in the emergency room until their release, all of the procedures were performed using a “push” flow which caused significant stress to the downstream personnel and, in turn, their working relationships. This realisation allowed us to explain the opposite concept of a “pull” type flow versus the “push” flow and we were able to then explain how to reverse the negative trend.

In a classical push flow, the process organisation is based on a forecast plan. Based on expected demand, each of the process steps is adjusted locally and the products, or clients, are literally pushed through the system resulting in bottlenecks and excessive wait-times. When a pull flow is employed, the service is optimised as a function of the actual demand and the overall process is optimised. The capacity of each service is balanced, bottlenecks are eliminated and circulation of patients becomes fluid. System status information is circulated effectively in order to allow people to adjust to the actual conditions and the work is no longer performed in isolation.

A word of wisdom was given to the units: “An emergency patient is not just an emergency patient but a patient of the entire hospital!” The emergency room is not a healthcare unit, it is a transfer unit. Procedures must be so planned as to ensure that everything is done to accelerate the possible transfer of patients to a more elaborate health-care unit and then, ultimately, to eventual release from the hospital. In this context, we can start from the end of the chain rather than from its beginning. Thus, at the patient’s arrival, the nurse on duty works with the doctor to plan his eventual release, while considering all of the various options along the way.

The results obtained after one year of trying various solutions are very satisfactory. They cannot, however, be entirely attributed to the Lean projects, at least not directly: the project initiated a series of actions which, overall, has led to the today’s results. The Lean approach is not a cure-all solution. Nevertheless, it does allow personnel to become aware of the problems and to offer possible ideas. It creates a dynamic within the organisation. Although small, short-term victories have been evidenced, the longer, more profound effects will take some time to evaluate.

Table 2 shows the status of the main criteria used to evaluate the performance of the emergency services [Ministry of Health 2013a]. A reduction in all of the significant indicators can clearly be seen.

These results, compiled during the first eleven months of the year are very significant. A positive trend and improvement of the overall system can clearly be seen with concrete benefits for the patients but what about the employees? Their health results are similar: personnel stress, which was significantly high last year, has been replaced with a situation that is much more normal and sustainable.

The Lean approach is a catalyzer but not necessarily a panacea. It is a means of implementing modifications within a hospital’s internal logistics and is one of many possible methods and methodologies developed over the last few decades. Although employed in a health setting, it is based on fundamental industrial engineering principles such as process analysis, objective data collection and analysis, involvement of personnel in the search for solutions, better approaches and more effective implementations. It is not that different from the well-known “Total Quality” and “Six Sigma” methods. It should, however, be kept in mind that employee involvement is not always enough. For more complex problems, a scientific background is critical. In-depth analyses, digital simulations and rigorous design methods are sometimes necessary to ensure the success of complicated projects. This is why Lean projects can involve clinical personnel but it is also essential to consult the expertise of experienced industrial engineering professionals.

One of the main advantages of the Lean approach is that it puts the solution within the reach of the employees of all departments. Supported by a good professional staff, serious objectives can be met and the results can be widely disseminated. It can provide great visibility to the rest of the organisation and lead to unexpected follow-on projects.

Claude Olivier is a professor in the Automated Manufacturing Engineering Department at ÉTS and an adviser to the office of Director-General. His research focuses on analysis and process optimization, and organisational logistic.

Renée Rivière is Director of the healthcare and nursing network at Maria Hospital, in the Baie-des-Chaleurs local area, Gaspésie, Québec.