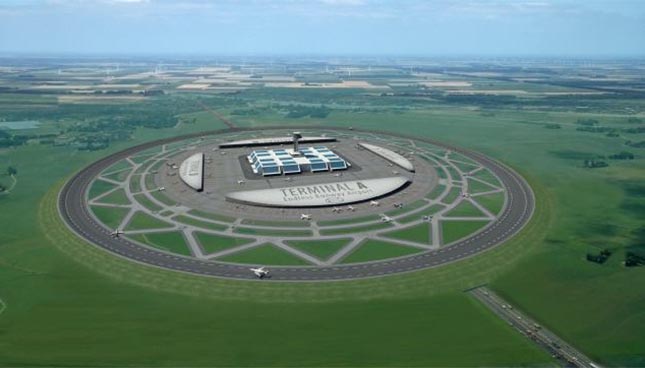 In 2016, air traffic increased by 6% compared to 2015, representing nearly 3.7 billion passengers transported worldwide. Constant increases in air traffic create congestion around airports. This is one reason why a new type of take-off/landing runway was proposed: theendless runway. The proposed runway is actually a circular track measuring 3.5 km in diameter, allowing three aircraft to take off simultaneously, as shown in the video below.

In fact, the concept was first proposed in 1919 and experimental testing was apparently conducted by the United States Navy on the General Motors circular runway in Arizona. The tests determined that the endless runway was a good solution. However, the test conditions did not fully represent current reality. They were carried out with smaller aircraft and the test pilots were trained for take off and landing on aircraft carrier runways, which are considerably shorter than airport runways.

Weather conditions can greatly impact take-offs and landings. For example, the aircraft may have to land in crosswinds, forcing pilots to descend while maintaining an angle with the runway, as shown in the video below.

The endless runway could help reduce aircraft fuel consumption because the aircraft would not have to make a detour to land on a specific track. However, this could cause other problems when weather conditions are not ideal. Sometimes pilots are forced to abort landing and resume flying in order to make a second attempt (see video below). If a pilot is required to pull up after a missed approach, the aircraft may come into contact with another aircraft in the process of landing or with an aircraft travelling on another section of the runway.

The endless runway is an innovative idea that would change the world of aeronautics. Although several elements remain to be refined, this could be the solution to airport congestion.