Providing Technical Support to a Health Technology Firm! - By : Substance, 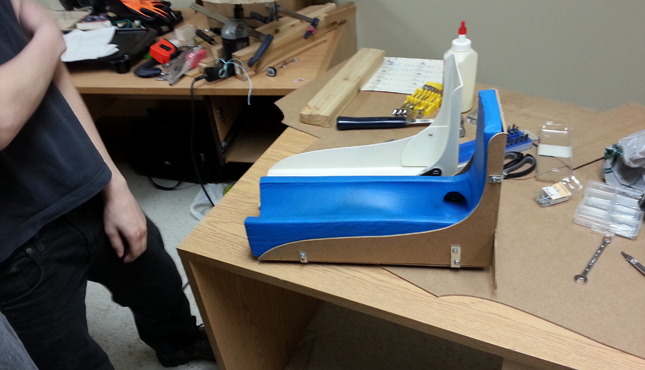 Ever wonder what it’s like to start your own company and do R&D to develop and market a product? In 2014, DécliQ, a Montreal-based group operating out of École de technologie supérieure (ÉTS), provided assistance to a start-up working at Centech, ÉTS’s incubator. As part of the project, ÉTS students provided technical support to Kevin Dubord, president of O&P-M Labs. In all, some 15 ÉTS students took part, feeling enthusiastic about the prospect of working for a start-up, without having to assume all the responsibilities that come with it.

O&P-M Labs is trying to develop orthopedic braces that will allow people who have suffered severe burns to learn to regain use of their hands. For two years, the company has been working on the “Glove Flexor” and the first version has just been released for sale.

This glove makes it possible to rehabilitate injured metacarpalphalangeal and interphalangeal joints. Before we could provide technical support, we first asked the start-up how we might help. When we started working with Kevin, the “Glove Flexor” was not fully developed yet. Despite two years of work, its design was not finished, meaning that the company had no source of revenue. This prompted us to try and find ways for the company to quickly make sales. But how? Still wondering, we spotted a foot brace for severely burned individuals in the corner of Kevin’s Centech office.

Kevin had been given the brace by a contact at a rehab centre who wondered if he could make a similar product. The supplier that had originally sold him the product had gone out of business, and Kevin’s contact couldn’t find any other suppliers that had it. The brace itself was made of a flexible, synthetic foam support covered with blue waterproof fabric. The foam insert was encased in a plastic frame that could be adjusted in length or set at different angles. The two pieces could be easily separated for maintenance. Kevin’s contact also explained that the product could be improved if they could find a way to prevent the screw in the frame’s joint from damaging the blue fabric shell.

Kevin didn’t have time to respond to this request because all his time was dedicated to developing the Glove Flexor. But we had time! We had stumbled upon a product that could help this fledging company start making money. 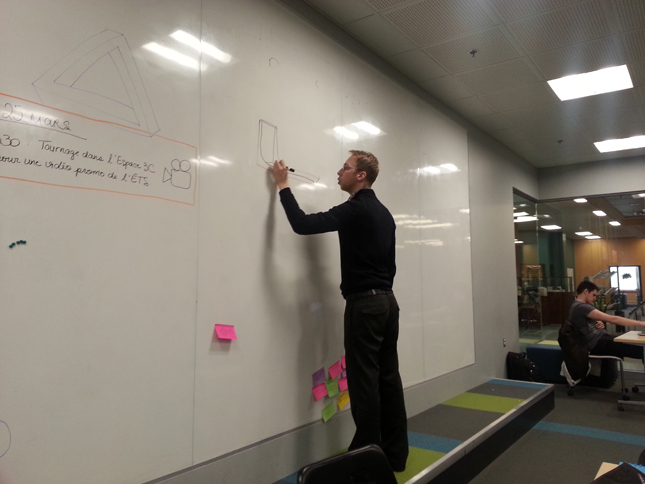 We held two brainstorming sessions at Espace 3C at the ÉTS Library with Kevin Dubord (seen on the photo) and the project team. Held on February 4th, 2014, the first session allowed us to develop four foot brace designs, each of drawn drawn and described in detail. Kevin then met with his contact to present the different designs and choose the best one.

A second brainstorming session was held on March 25th at Espace 3C. There, we fine-tuned the best solution and discussed how we might build a prototype. Weeks later, on April 6th, we used compressed cardboard from an old sign to make the prototype. The bolts and angle iron were bought at the neighbourhood hardware store (which was fortunately open on a Sunday!). 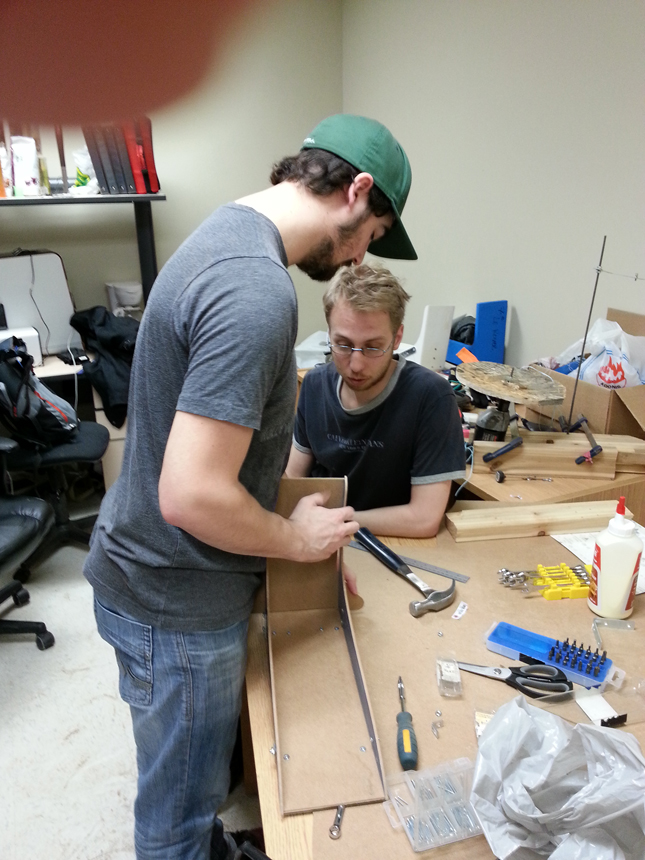 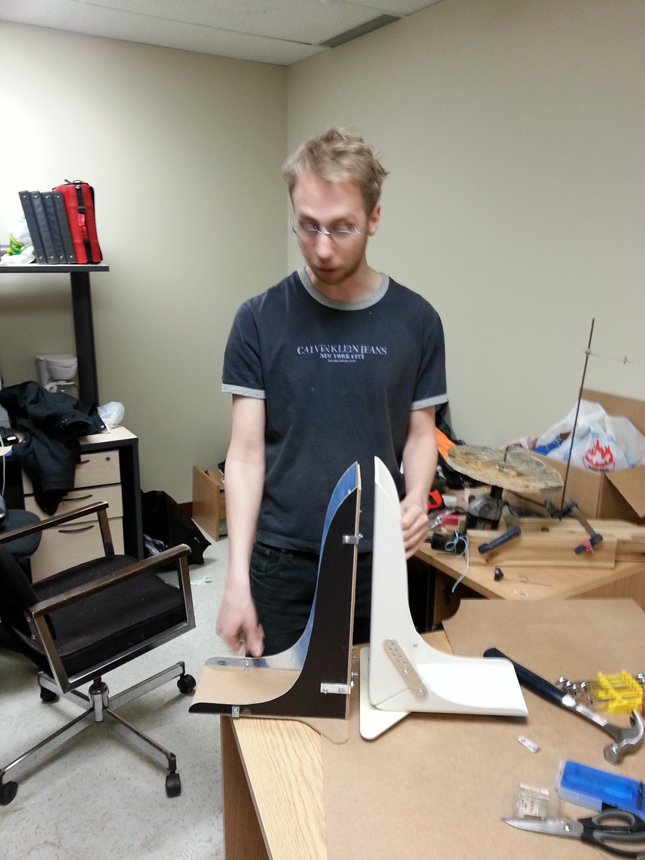 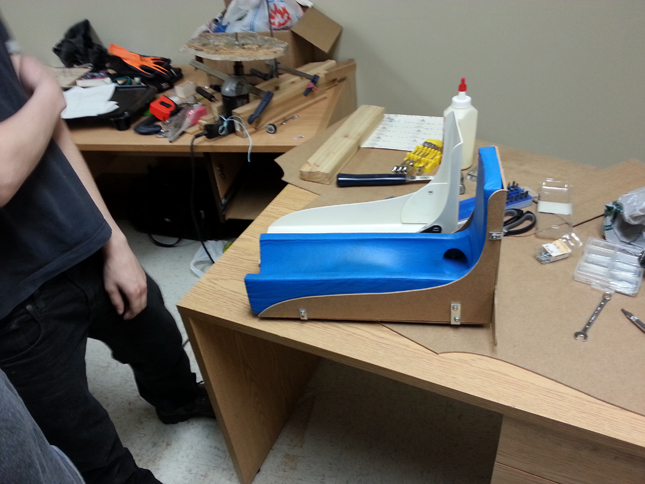 Kevin showed the prototype to his contact (and future client), who gave it his stamp of approval. We were ready to move on to a more advanced prototyping phase. A plastic manufacturing company in the Chambly industrial park produced the first plastic prototype based on our CAD designs. There were a few glitches with mould that sent us back to the drawing board. The new prototype was eventually tested at the rehab clinic with patients—and it worked! 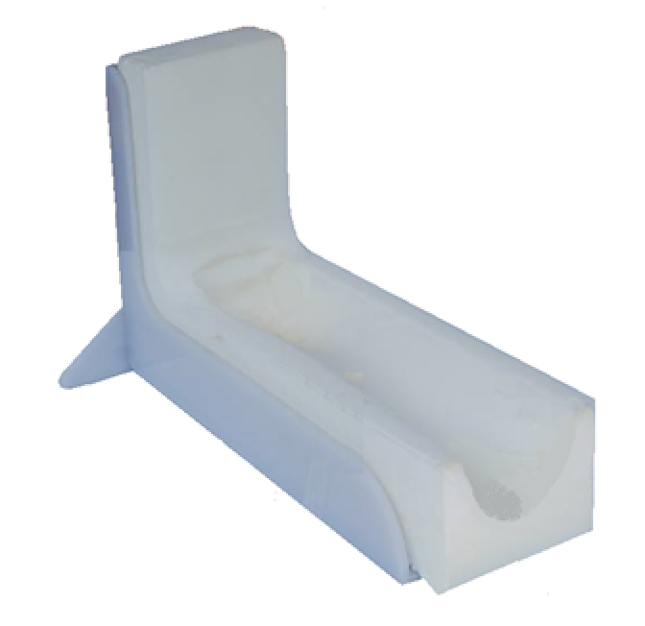 Kevin moved forward with the development of the foot brace during the summer. Today, it is sold as a “foot brace shell.” According to Ken, “the shell was approved by the Infection Prevention Department at the Montreal University Hospital Centre. It is made from a material that is more resistant than ABS thermoplastic. What’s more, the shell is fused into a single solid piece for easier cleaning and better resistance to torsion and impact.” And the best news is that the Severe Burns Department at Hôtel-Dieu Hospital in Montreal has already ordered four!

Through this DécliQ project, participating students were given the chance to appreciate the challenges, constraints and joys associated with running a business. Meanwhile, Kevin ended up with a product that is already generating revenue and will allow him, we hope, to continue working on his business project. The last time we talked to him, Kevin was in discussions with a potential financial partner for the development of the Glove Flexor.

Students from DécliQ will be offering technical support to Écopoto in 2014–2015. This company is currently hosted at the Centech incubator and trying to develop customizable electrical poles made from biocomposite material, as an alternative to traditional wood poles. Six people work for the company, including ÉTS’s Sofiane Bounaffaa and Milagros Beuses.