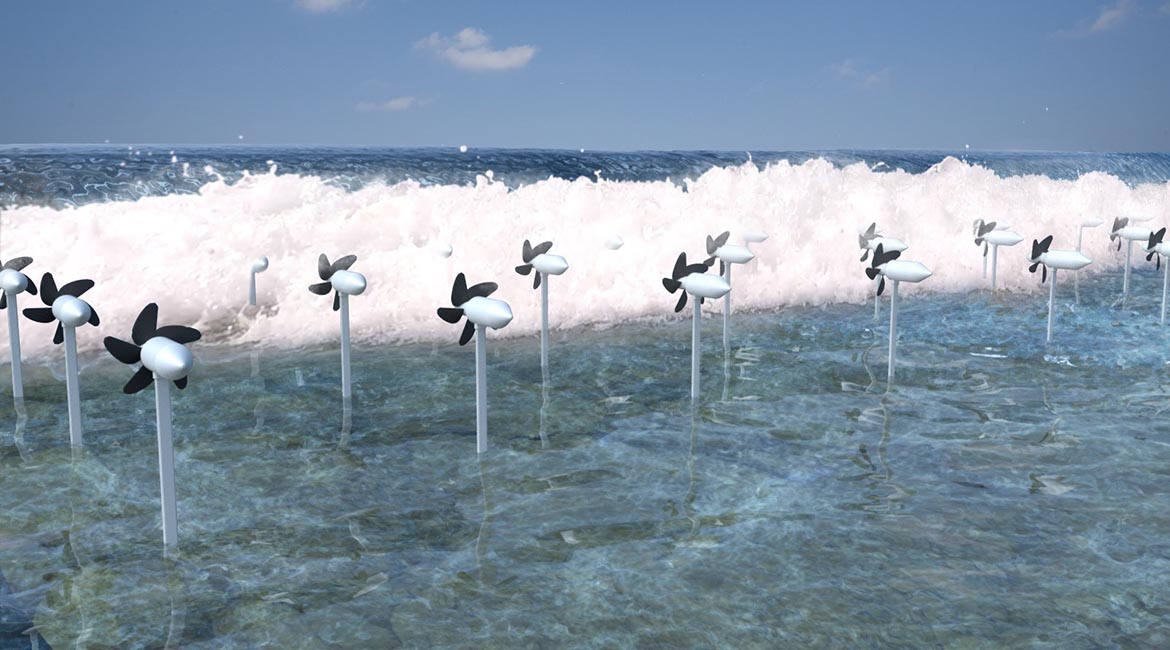 The featured image is from the OIST. No known copyright restrictions.

Beach erosion is threatening and particularly difficult to manage on coasts lined with large buildings and urban infrastructure. In Quebec, this is a reality facing residents of the eastern lower St. Lawrence and Gaspé regions.

A group of researchers from the Quantum Wave Microscopy Unit of the Okinawa Institute of Science and Technology (OIST), in Japan, has devised a solution that can help solve the problem of shoreline erosion while transforming wave energy into electricity. On September 20, 2017, the team posted an article on the university’s website entitled “A Sustainable Future Powered by Sea“.

This system consists of a series of turbines installed along the coastline (Wave Energy Converter). According to the researchers, the structure is strong enough to withstand typhoons. To be effective against marine erosion, the turbines must be installed in front of natural or artificial breakwaters. The researchers propose using shorelines lined with tetrapods, marine engineered tetrahedral concrete modules used to form breakwaters.

Professor Tsumoru Shintake, the project’s lead researcher, noted that 30% of Japan’s coastline is covered with tetrapods and other types of breakwaters. According to Shintake, to equip a mere 1% of the coastline with this system would generate 10 gigawatts of energy, which is equivalent to the production of 10 nuclear power plants. The constant crashing of the waves on the turbines adds up to an unlimited source of energy.

Note that there are several solutions designed to harvest coastal wave energy such as:

Operation of the OIST System

Each turbine would be equipped with five 70-cm (27.6-inch) diameter blades, on a rotation axis connected to a permanent magnet electric generator that transforms wave energy into electricity. The harvested energy would be delivered by a cable located in the mast that supports the turbine and is connected to the shore. A ceramic mechanical seal protects electrical components from saltwater infiltration. This design will allow the turbine to operate for ten years before it needs to be replaced. 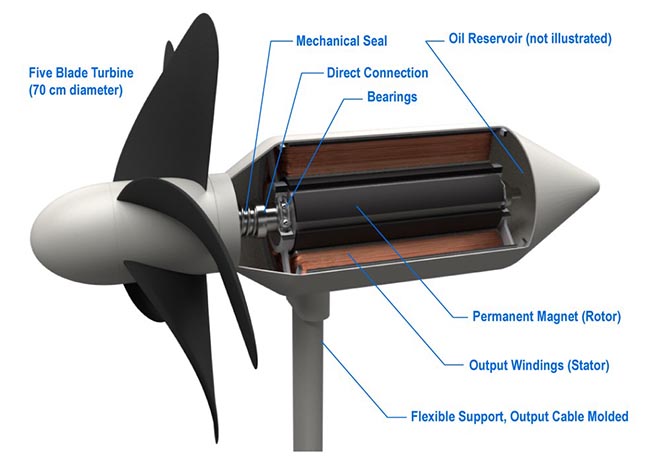 Diagram of the turbine

The shape of the blades is inspired by dolphin fins to withstand the very strong wave motions and other types of stress that can occur in an uncontrolled space. Indeed, the blades are flexible in order to withstand the strong water forces. Their rotation speed was calculated to allow marine creatures that cross the turbine area to escape without injury. According to the study, maintenance can be done by the teams that presently inspect the tetrapods.

The initial phase of the project was successful and the team is now seeking industrial partners to move on to the next phase, which aims to demonstrate the effectiveness of the technology. To do this, the team will install two half-scale turbines, that is, 35-cm (13.8-in) diameter blades to power LED lights.