Predicting Ice Debris Trajectories Around an Aircraft in Flight

Kevin Ignatowicz completed his Master’s degree at ÉTS in research as part of a joint thesis agreement with École Nationale Supérieure of Mechanics and Aerotechnology (ISAE-ENSMA). He is now a Ph.D. student in the Department of Mechanical Engineering at ÉTS.

Pierre Lopez Author profile
Pierre Lopez is a French engineer from ENSEIRB-MATMECA currently working in finance consulting after a double degree in quantitative finance at the University of Bordeaux. 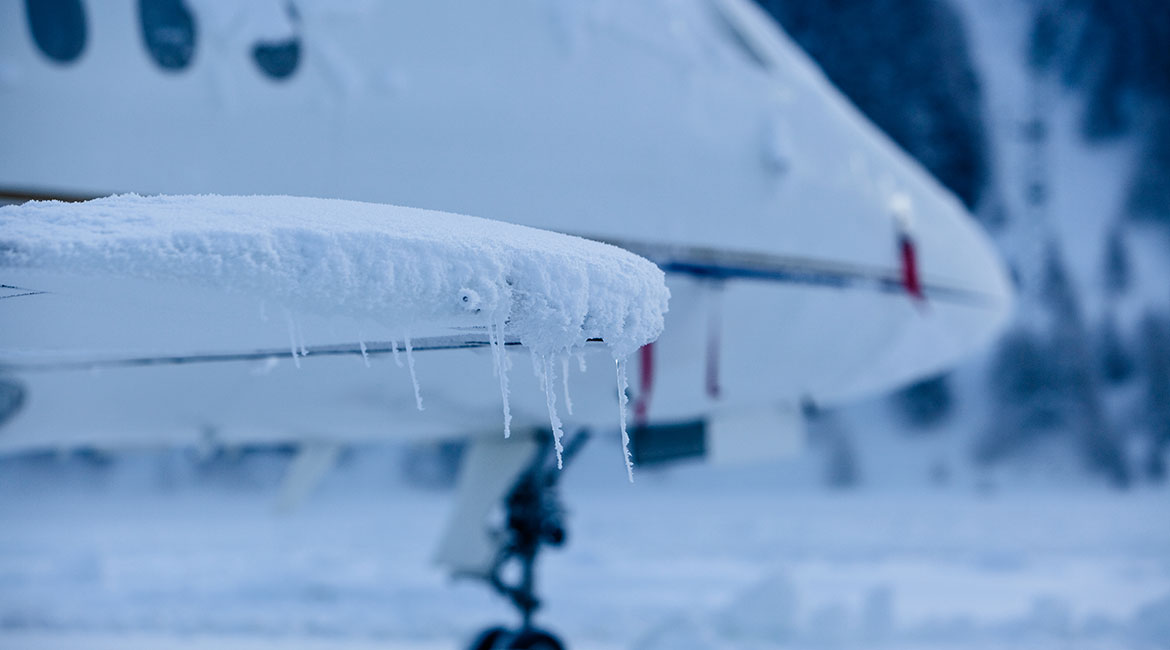 In freezing weather conditions, ice can form on an aircraft surface. Ice debris dislodged by activating deicing systems can become dangerous projectiles, and knowing their trajectory is of paramount importance. A previous article published in Substance laid the foundation for the calculation of ice debris trajectories around an aircraft. In the present study, the debris is considered to have the form of a thin plate. The objective is to propose a mathematical model for the 3D damping moment in order to improve the models used in the literature. This damping moment makes it possible to limit the self-rotation speed of the plate and avoid extreme situations, where angular speeds are excessively high or, conversely, zero. After explaining the equations used to calculate trajectories, the article focuses on the expression of the damping moment. The model will first be compared with the experimental observations of Tachikawa (1983) for verification. Then, the implementation is illustrated with trajectory calculations around a blended-wing-body aircraft.

Predicting the trajectory of a projectile has been the subject of numerous studies in ballistics and civil engineering. For example, trajectory calculations help prevent the risks associated with large debris carried by tornadoes (Fu, Huang, & Gu, 2013). Numerical models and experimental results were generated to predict the trajectory of moving debris in the air. This study applies trajectory calculations to the field of aircraft icing. Ice accretions can form on the surface of an aircraft due to weather conditions. When in-flight deicing systems are activated, ice can detach from the surface and turn into projectiles that could be dangerous to the aircraft’s engines or structure. It is therefore necessary to predict debris trajectories to avoid placing critical aircraft components, such as engines, in the path of debris.

The purpose of this article is to describe how to digitally calculate the trajectory of a thin plate of ice debris based on Newton’s second law of motion. The focus will be on modeling the damping moment, a critical parameter for the rotational motion of the plate, governing the fact that the angular velocity of debris cannot lead towards infinity nor towards zero. The research consisted in proposing a new mathematical model for the damping moment.

The equations governing moving debris are based on Newton’s second law of motion. This law has two components: translational motion (equation 1) and the conservation of angular momentum (equation 2). The configuration of the problem in the case of thin plate debris is shown in Figure 1. 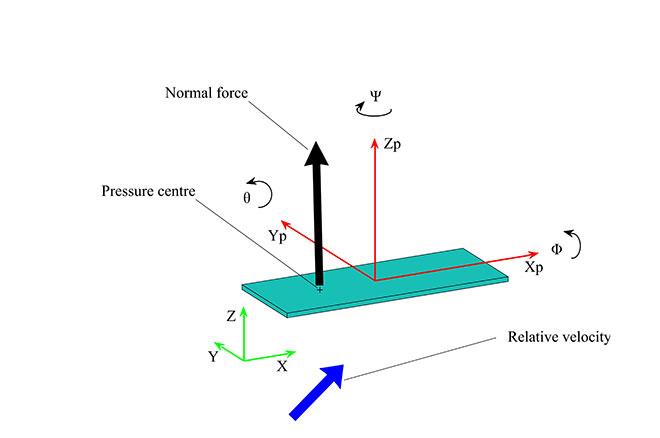 Figure 1 Configuration of a thin plate.

The translational component of Newton’s second law is applied in each direction of the fixed reference frame (X, Y, Z), showing the translational movement of the plate in these three directions. Meanwhile, the rotational component is applied in the directions of the moving mark linked to the plate (XP, YP, ZP), showing the rotational movement along these three axes: 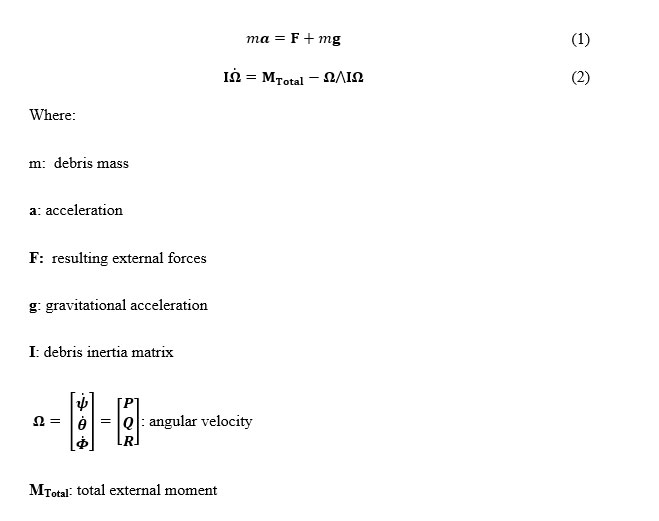 The simultaneous resolution of equations (1) and (2) allows the position, velocity, orientation, and angular velocity of the debris to be known at all times.

The focus of the research project was on the dynamic damping moment. This moment is one of the components of the MTotal moment, where:

Maero is the moment caused by the aerodynamic force at the object’s centre of gravity. This force is shown as Normal Force in Figure 1. The literature review reveals a disparity in the MDamping modeling: some authors favour a constant value (Suares, 2005), while others use linear (Tachikawa, 1983) or even quadratic (Richards, Williams, Laing, McCarty, & Pond, 2008) models with respect to angular velocity. Initially, the quadratic model was favoured.

The quadratic model gives a good correlation with respect to the 3D trajectories obtained by Richards et al. (2008). Nevertheless, and as will be shown later, the model predicts that after some time the plate will stop rotating, thus continuing to move in a purely translational state, which is contrary to Tachikawa’s (1983) experimental observations. This led to the development of a new model, based on Tachikawa’s linear model: 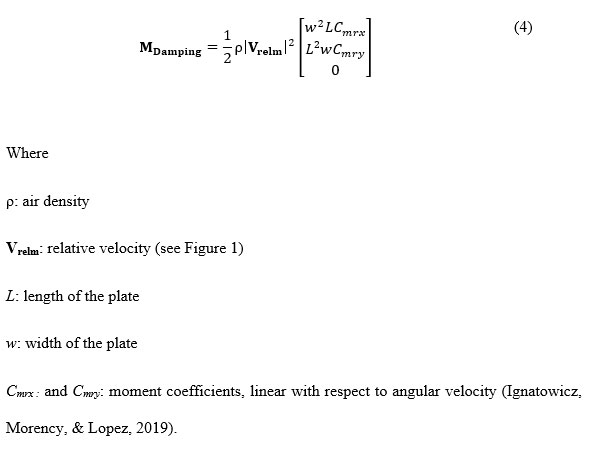 The verification test case is:

The following figure shows a variation in the damping moment value along the YP axis and the angular velocity Q = around the YP axis as a function of the distance travelled in X. 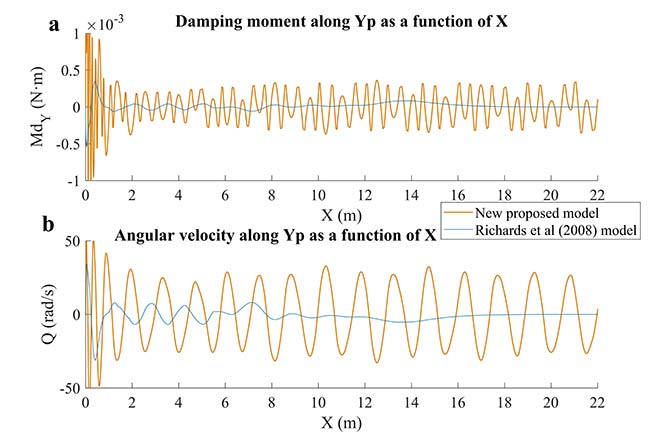 Figure 2 Damping moment (a) and angular velocity (b) along YP as a function of X.

The comparison shows that both models predict different behaviours: Richards et al.’s model strongly dampens the plate’s rotation, which causes the rotation to stop after some time (Figure 2b). This is due to the fact that the moment of Richards et al. is constantly opposing the rotational speed. The new model, on the other hand, maintains rotation throughout the entire X movement and is only opposing the rotational speed when it exceeds a critical value (Ignatowicz et coll., 2019). Therefore, the new model does not predict pure translational motion for the plate, which is in line with the experimental observations of Tachikawa (1983).

Applying the simulation tool in the calculation of ice debris trajectories around an aircraft also shows that the debris trajectory is sensitive to the selected damping moment model. The studied trajectories are about ice debris detaching from the wing, which is frequent, especially during in-flight deicing phases. To estimate the location of moving ice debris at the aircraft engines, the dispersion of a statistical sample of ice debris is observed in the cross-sectional plane shown in Figure 3. 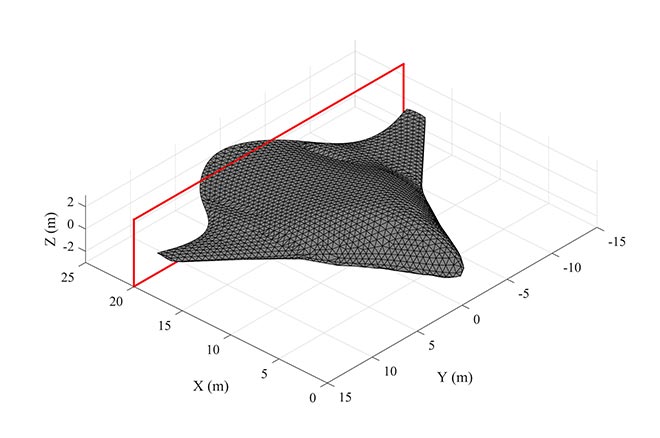 To obtain a representative statistical sample, the trajectories of 300 thin plates were simulated, with random initial velocity and orientation for both damping moment models. The initial position was also randomly chosen around the wing. Figure 4 shows the dispersion in the map depicted in Figure 3.

Figure 4 Ice debris dispersion at the rear of the aircraft for each damping moment model: Richards et al. (a) and the new model (b)

The difference between the two models can be seen in the previous figure: Richards et al.’s model predicts a much larger dispersion, especially along the Z axis. This is because the plates stop rotating at a certain moment, which tends to set their translational direction. Conversely, the new model leaves the plates free to rotate, allowing them to have a translational movement that follows airflow around the aircraft. The new model therefore predicts trajectories closer to the experimental observations.

As part of the study on ice debris trajectories around an aircraft, a new damping moment model for thin debris was proposed. This model is innovative because it gives the debris different rotational characteristics compared to previous models in the literature. Indeed, the debris retains some rotation during flight, a movement that was unobserved with the Richards et al. model. This feature is an improvement as it corresponds to the experimental observations of Tachikawa (1983), who concluded that thin rotating debris never evolves into a state of pure translational motion.

For more technical details and information on this research project, please refer to the following article:

Pierre Lopez is a French engineer from ENSEIRB-MATMECA currently working in finance consulting after a double degree in quantitative finance at the University of Bordeaux. 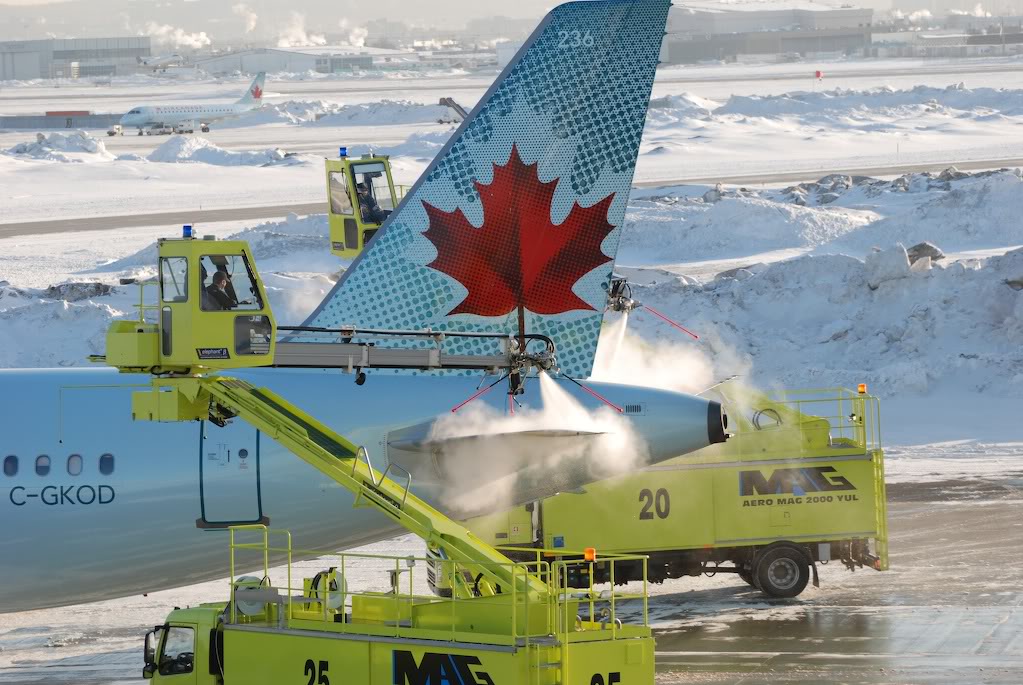 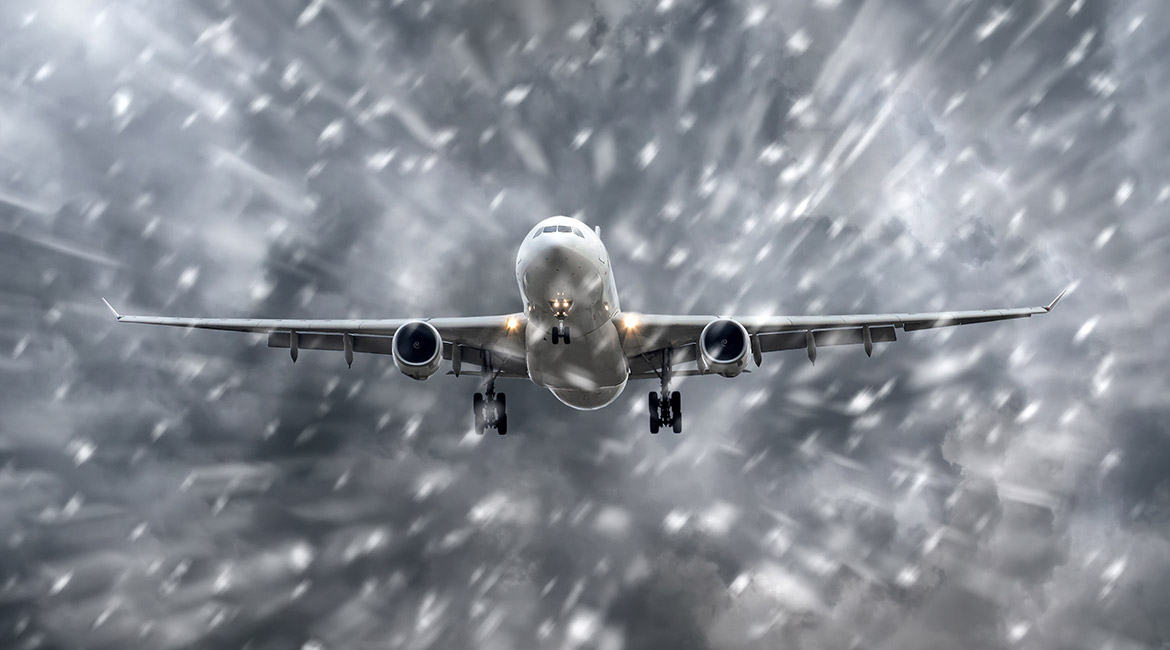