Philae detects organic molecules on the comet prior to hibernate - By : Substance,

Philae detects organic molecules on the comet prior to hibernate 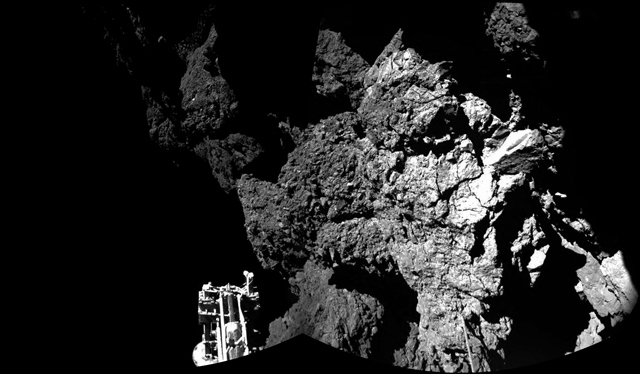 Philae has finally worked only 57 hours on the comet, before entering hibernation. It is true that the environment is chilly with a temperature of -170° C. But in fact, Philae does not hibernate. Its actual position is the only cause of its turn off. During the landing Philae touched down and made several rebounds to finally land in a dark area and could not recharge its batteries.

OSIRIS/Rosetta : The mosaic comprises a series of images captured by Rosetta’s camera over a 30 minutes period spanning the first touchdown.

Despite the unplanned series of three touchdowns, Philae has made some important discoveries and accomplished 80% of the work planned. With its 10 instruments, the mini laboratory sniffed the atmosphere, drilled, hammered and studied the Comet 67P.

Dr Fred Goessmann, responsable of the Cosac instrument, from Max Planck Institute in Göttingen, Germany, has confirmed the discovery to Science et Avenir. For now, the European Space Agency (ESA) has not yet officially confirmed this information. The data are currently being analyzed and further research is being conducted to see if there are complex compounds like amino acids essential to create proteins.

Philae also revealed that the comet’s surface was harder than researchers had expected, described as a “tough nut to crack”.

The scientists are now confident the probe may “wake up” again in August 2015 after a long hibernation. Philae should wake up when the comet is closer to the sun. Scientists hope it might have enough solar illumination to re-establish communication.

These observations from Rosetta will allow scientists to watch the short- and long-term changes that take place on the comet, helping to answer some questions regarding Solar System’s history. How did it form and evolve?  How do comets work? What role did comets play in the evolution of the planets?

To be continued soon!