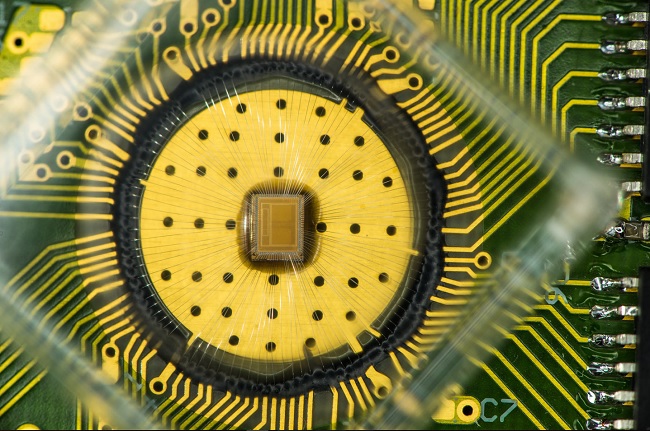 Scientists at the IBM Research group in Zurich, Switzerland, presented an experimental optical storage which is faster than SSD (Solid State Drive) and more efficient than DRAM (Dynamic Random Access Memory).  This new technology called phase-change memory (PCM), is a type of optical memory that takes advantage of the opto-electronic properties of compound semiconductors made of germanium, tellurium and antimony (GST glass).

In short, GST glass changes its crystalline structure when a high current is passed through it.  It goes from amorphous (a glass with no periodic atomic structure) to crystalline (highly arranged periodic structure), and back.  This process is called a phase-change, thus the name of this memory device.  Each of these crystalline states can be “read” as a bit of information by sensing the electrical conductivity when a voltage is applied.  If the conductivity is high, it is considered a 1 and if it is low, it is a 0.  These states remain even after cutting the external power, making this PCM memory non-volatile.

The ability to easily control the crystalline structure in GST glass to create memory modules was previously done using a laser source. In fact, this is the technology involved in re-writable CDs and DVDs. However, the storage density, the writing speed, and the price per GB had always limited this technology when competing with DRAM and more recently SSDs.

Where Does Phase-Change Memory Stand Compared to FLASH and DRAM?

In terms of storage density, FLASH memories are the best choice.  They are relatively slow but cheap to produce. The most basic memory cell stores only one bit of information (either 1 or 0), and only in latest generations (see, multi-level cells) is it possible to store multiple bits per cell.  A PCM cell based on GST glass is able to store 3-bits of data per cell while being faster than the best FLASH memory available today.

In terms of storage speed, very expensive DRAM and SRAM memories are the most common. While these are extremely fast, they are volatile and have to be refreshed every so often to guarantee safekeeping of information. These are present in the commonly known “RAM and VRAM” memories in computers and cache memory in processors. The PCM cell introduced by IBM is not as fast as DRAM but it is not volatile and the production cost is definitely lower.

In terms of lifetime, Flash memory can withstand about 3000 write cycles.  Phase-change memory can go on for at least 10 million cycles with outstanding temperature stability.  With volatile memories such as SRAM, the concept of lifetime is rather different and hard to compare.

In conclusion, GST-based phase-change memory is faster than FLASH memories, cheaper to produce than DRAM, and non-volatile.  This means phase-change memory could now be used in applications other than re-writable CDs and DVDs.  Used in conjunction with FLASH memory, load times in mobile devices could be significantly lower than actual numbers.  In industrial applications, database storage managed on PCM modules means faster queries and transactions of huge amounts of information.

Other application IBM is considering for this technology is storage for artificial intelligence machines.  Computers such as the Watson Supercomputer perform millions of iterations in order to give a single answer.  Having a large and faster storage to tap into is aquite desirable.

This publication can be found at: source.