Pepper, the First Robot to Understand Human Emotion - By : Substance, 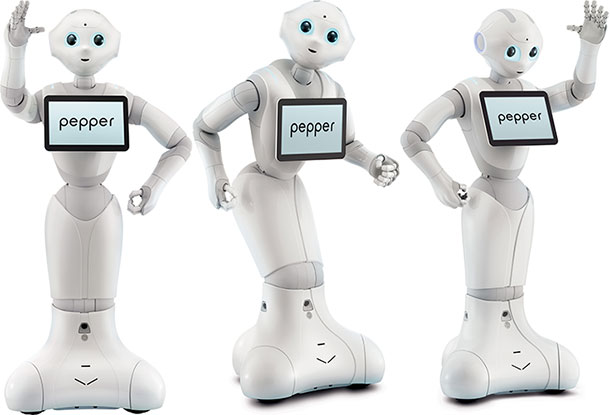 Who’s Pepper? Designed by Aldebaran Robotics, the world leader in humanoid robotics, Pepper is the first robot made to live with humans. Measuring 1.2 metres (5’2”) and weighing 28 kg (61 lbs.), Pepper can interact with you more intuitively by responding to your voice, touch and emotions.

A sensitive and good-natured companion

Pepper is more than just a robot, he’s a companion. He’s the first humanoid robot designed for the general public that can recognize his owner’s emotions and artificially generate reactions.

Pepper understands basic verbal expressions and body language, such as smiling and frowning, as well as emotions like surprise, anger and sadness. Pepper is also able to analyze your tone of voice. If Pepper detects that you’re feeling down, he may offer to play you a song or tell you a funny story to cheer you up. He’s the first robot to have a “heart” and to want to forge a true relationship with users.

An interactive and evolutionary companion

What’s more, Pepper’s artificial intelligence is cognitive. This means that over the course of his conversations, Pepper remembers who he has spoken to and what their likes and dislikes are. Using sensors and cameras, this emotional robot adapts his behaviour to suit his owner’s personality and mood. Already, this humanoid robot has had great results interacting with Alzheimer patients and autistic children.

“Emotional robots will create a new dimension in our lives and new ways of interacting with technology,” said Bruno Maisonnier, founder and CEO of Aldebaran. The developer community will soon have the chance to contribute to the project, as this company will make the software development kit available shortly.