French student Julien Marolleau is working on a Master’s degree in aerospace engineering at ÉTS, as part of the double-degree program established between ÉTS and the University of Technology Belfort-Montbéliard.

The header image shows Montreal with its flamboyant autumn colours; it was provided by the author. The Substance CC Licence applies.

Montreal, the capital of aeronautics

In late summer of 2017, I moved to Montreal to get specialized training in the aerospace industry, a field that has always fascinated me. Montreal was the best choice because of its position in the world of civil aviation, where international organizations (ICAO, IATA, etc.), aircraft manufacturers (Bombardier, Airbus), engine manufacturers (Pratt & Whitney), and others are located. In addition, many friends had told me about Quebec, attractive because of its vast expanses and quality of life.

The Master’s in Aerospace Engineering offered at ÉTS is part of a joint initiative with several Montreal universities, in partnership with CAMAQ, which coordinates internship and case study activities between universities and participating industries. The strength of this partnership lies in offering high-level technical courses, which facilitate the acquisition of many practical skills that can be used during internships. Another strength is the requirement to take at least two courses at another university in Montreal, in order to take courses given by professors who are experts in their field and to acquire specific cutting edge skills. 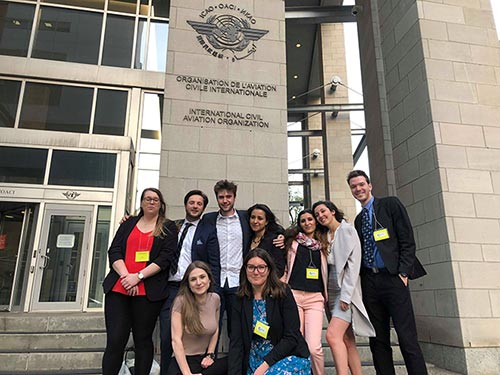 Organizing team of the ICAO Simulation

When I arrived in late August, it was much warmer in Quebec than in France, despite what may be said about the weather! On a more serious note, what struck me first was the quality of the premises and services available to students: the buildings are beautiful and pleasant to use, and the welcome process is really comprehensive.

I also quickly discovered the great cultural differences between France and Quebec, which makes the experience all the more interesting: we truly must remember that Quebecers are not French people in North America, but North Americans who speak French! I was also very impressed during my first outing in the Quebec backcountry, on a discovery trip organized by an ÉTS cultural club (many thanks to ETSperanto). I was fascinated by the beauty and richness of the wide open spaces. It was also an opportunity to make many friends among those in double-degree programs like me. 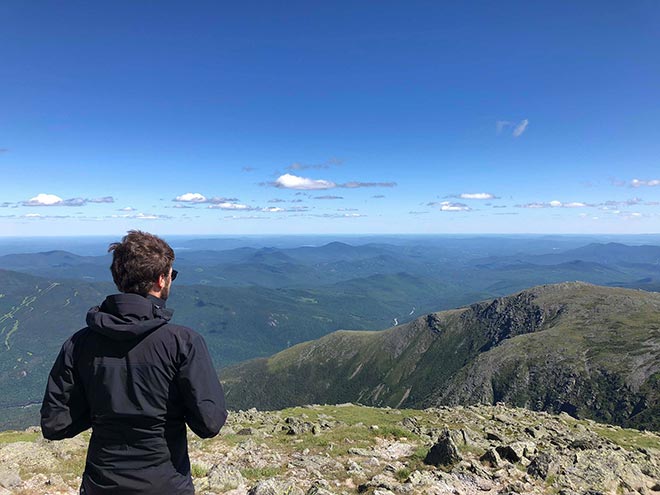 Panoramic view on top of Mount Washington, in New Hampshire

The main difference between the Quebec and French systems in engineering schools is the total freedom we have in our choice of courses, allowing us to match our profile to our professional ambitions. The autonomy expected by professors is very important: although there are fewer hours of classroom instruction with a professor compared to schools in France, there is much more personal and comprehensive research to be done on our own. The professors also offer many projects in partnership with companies, which provide opportunities to show what we can do in an industrial context. It also makes it possible to take fewer courses and learn new skills in a different way. Professionally, there are also marked differences between France and Quebec. We understand early on that networks and contacts mean everything, and that we must make the effort to attend the networking events (“[email protected]” networking)Organized activity with the main objective of bringing together students and professionals who share common interests in a given field

as often as possible. Also, I find that employers here base their judgment much less on diplomas and much more on the potential for added value: we are given a better chance. 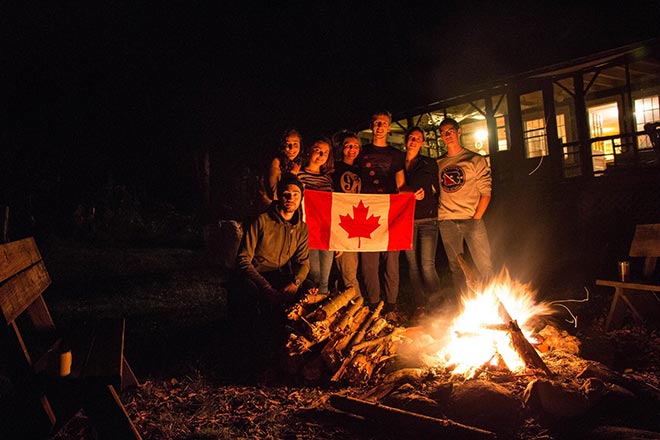 Weekend at a chalet around a campfire, near Montreal

As nearly half of the Master’s students are foreigners, a good portion of whom are French, efforts must be made to create ties with Quebecers. For me, it was a student job in a bakery near ÉTS that helped me make my first Quebec friends. Getting involved in student clubs also provides good opportunities to create ties.

A university connected to industry

I would say that the main strengths of ÉTS are its critical mass (more than 10,000 students!) and a widely recognized brand in its fields of specialties, particularly industrial engineering applied to aerospace. Its other strength is to be established in a very dynamic neighborhood and to have a lot of space on a single campus located in downtown Montreal. The school also supports technology clubs and student cultural groups, allowing us to get involved in areas that we are passionate about: drone design, participation in international rocket competitions, aerospace promotion: everything is there, and in all areas of engineering.  Furthermore, the ÉTS brand makes it possible to find many partnerships and industrial sponsorships. 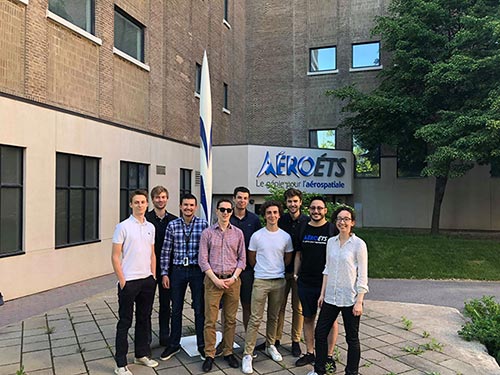 My star-studded team from AÉROÉTS, a group that promotes aerospace at school

What about the future?

I have decided to move to Quebec, so my career plans include finding an R & D engineer position in a Montreal-based aerospace company. I would also like to continue my involvement in Quebec’s aerospace organizations, and in particular Aéro Montreal, where I was fortunate to be recently appointed ÉTS ambassador. This volunteer commitment makes it possible to organize events, with passionate students from other universities, to promote Quebec’s aerospace industry, while enabling professionals and students to meet and build their networks. This is extremely interesting from a personal point of view and is an opportunity to add a small stone to Quebec’s rich aerospace cluster.

Do not hesitate to get started, this kind of opportunity does not come up often, and life in Montreal in general, and at ÉTS in particular, is truly worthwhile. This is a unique opportunity to step out of your comfort zone and learn to open up and challenge yourself. I truly feel that it is as a student that this kind of adventure should be undertaken; with work, family, and everyday life, it becomes much harder to travel to the other side of the world.

An important piece of advice also for people who wish to stay in Quebec after graduation (and especially for those in the double-degree Master’s program): do at least one internship here, in a Quebec company. Without this first Quebec experience, we are much less competitive, especially when compared to ÉTS engineering graduates, who have already done many internships. 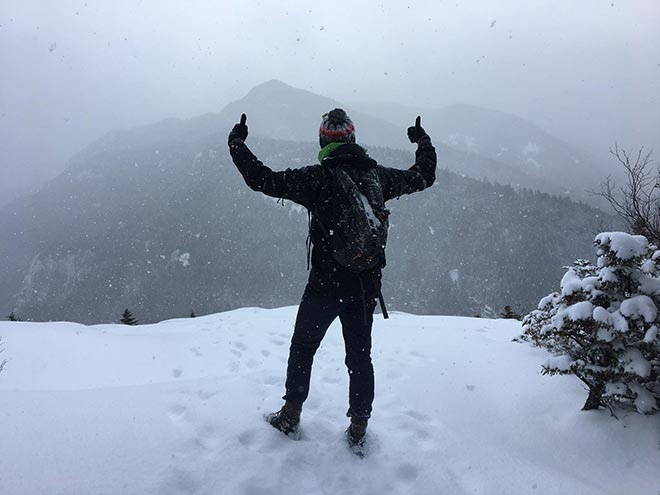 Arrival at the top of a mountain during a hike last winter: the snow can’t stop us!

Julien Marolleau is taking part in the double-degree program with the University of Technology Belfort-Montbéliard. He is completing an engineering degree in mechanical engineering, and is a Master’s student in aerospace engineering at ÉTS.

Studying Engineering in Montreal—A Warm Vibe in a Northern Climate 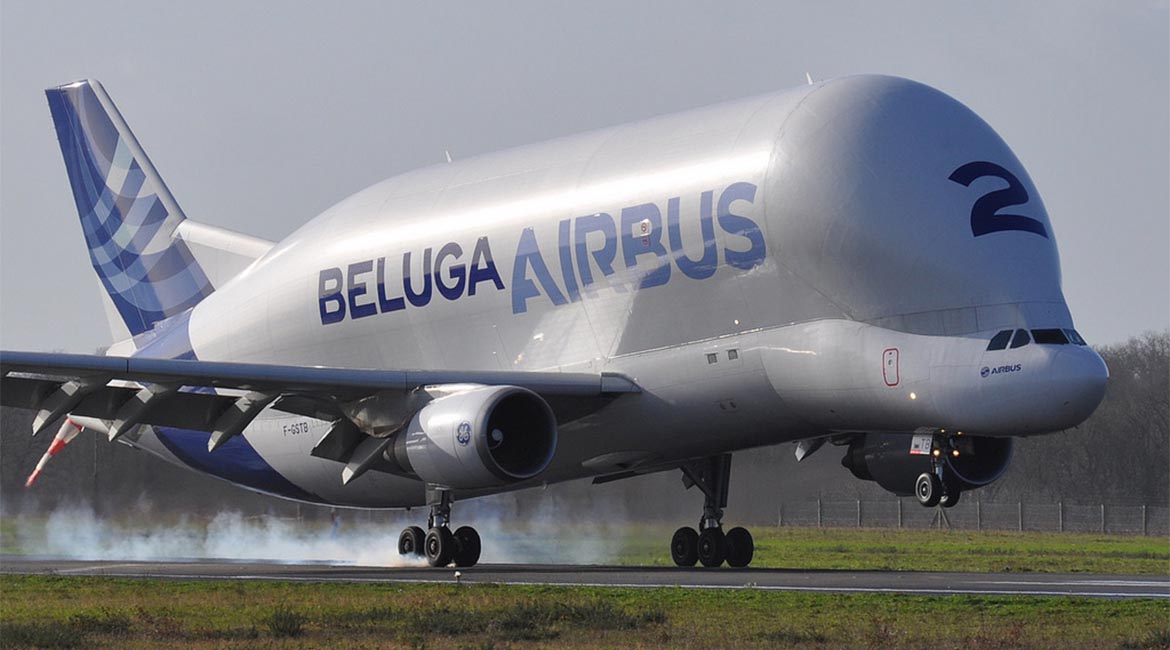 My Engineering Internship at Airbus in France