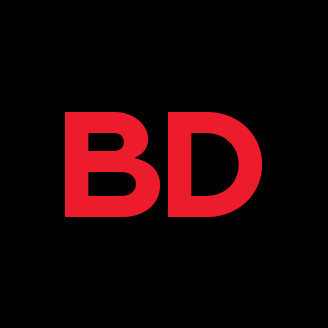 The Flight Management System (FMS) is a key element of the modern commercial aviation. Right from the introduction of its first design by Honeywell, in 1982, it revolutionized the aircraft navigation providing an easy-to-use and dependable means to program a flight navigation plan and guide the aircraft along the trajectory described by the flight plan. The plan would consist of a set of geographic coordinates and the corresponding restrictions (altitudes, speeds, times etc.). It had an immediate and direct contribution to the improvement of the air safety and airlines’ economics by allowing more precise aircraft performance calculations, optimized flight trajectories, and better aircraft guidance. Among others, the FMS opened the way to modern cockpits, which can be operated by crews composed of only 2 pilots (whereas older cockpits required crews of three to five members).  As described in the literature ([1]-[7]),  the FMS’ functionality and performances were and continued to be subjected to sustained research and modernization, in line with the introduction of new air navigation standards, new or improved radio-navigation equipment, the increase in computation power and the development of new software tools and algorithms.

Contributing to the general effort, the team formed at LARCASE laboratory following the collaboration with CMC Electronics-Esterline, under the auspices of the Green Aviation Research and Development Network (GARDN) investigates new strategies and algorithms that would enhance the capabilities and performances of the FMS as well as their impact on the environment. The research performed at LARCASE, from which the problematic of this article is part, addresses issues such as: Flight trajectory optimization algorithms, the influence of the wind’s dynamics and/or the requested time of arrival (RTA) constraints on the optimal trajectory, and environmental footprint.  The results of the research were published in aeronautical journals and conferences ([8]-[16]). 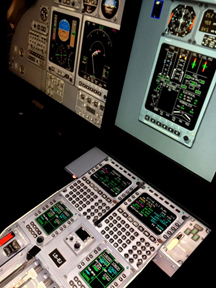 For medium and long-haul flights, the predominant part of the flight trajectory corresponds to cruise, constant speed and level flight configurations. As described in the literature ([6], [7]), the fuel burn model for this configuration imposes a limitation on the maximal length of the segment for which the fuel burn is computed (50 to 100 nautical miles). Therefore, longer segments are decomposed in a set of sub-segments. It also considers a constant value of the instant fuel burn (fuel burn rate) equal to that computed from the aircraft performance linear interpolation tables using the aircraft’s state parameters at the beginning of each sub-segment. On each sub-segment, the fuel burn value is computed as the product between its corresponding fuel burn rate and flight time.

Consequently, the fuel burn model for constant speed and level-flight cruise segments presents a number of drawbacks. Firstly, segment length limitation may increase the computation workload due to the need for segment decomposition. Secondly, the actual value of the fuel burn rate varies constantly along the segment, as the aircraft’s gross weight value decreases by the fuel being burned – illustrated in the example contained in the next figure. 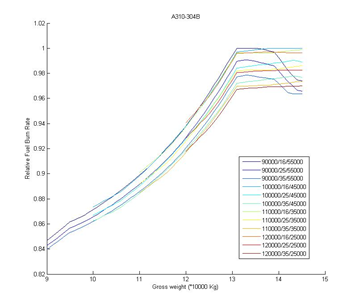 Therefore, the error represented by the difference between the actual fuel burn value and its computed value using the simplified model is propagated and possibly increased along the cruise trajectory; this error influences negatively the performances of the flight trajectory computation and optimization algorithms. Thirdly, the flight time required for burning a given quantity of fuel is not determined which may be useful in conjunction with future optimization algorithms.

The objective of the related research paper is to propose a new algorithm to determine the fuel burn on the cruise, constant speed and level flight segments, which factors the continuous variation of the fuel burn rate. In this algorithm no limitations are imposed on the segment’s length. Also, the algorithm can compute aircraft flight times function of a given fuel burn value. The fuel burn and flight times look-up tables are constructed using and based on the same aircraft performance interpolation tables as the ones currently employed by the FMS and the Runge-Kutta integration algorithm.  The algorithm was decomposed in sub-modules in a way in which it eliminated the computation redundancy (thus reducing the FMS computational workload) and minimized the algorithm’s response times. Its performances were evaluated on cruise segments of 500 nautical miles by comparing the algorithm fuel burn values computed for two aircraft performance models (Airbus A310 and Sukhoi Superjet 100) with their corresponding values computed by a CMC Electronics-Esterline CMA9000PTT (FMS simulator) for identical test configurations. 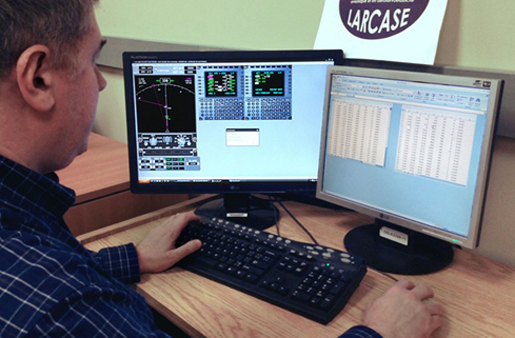 The results indicated fuel burn differences in the range of -3.9 to +0.38% for Airbus A310 and -3.2 to +1.4% for Sukhoi Superjet. The tests also showed that the time required for retrieving the fuel burn value from the look-up table was of maximum 0.2 ms.

Minimal, maximal and average differences between the fuel burn values predicted by the algorithm and the CMA9000PTT, function of the cruise altitude, evaluated on a set of test configurations for the Sukhoi Superjet 100 aircraft performance model. [Img7] 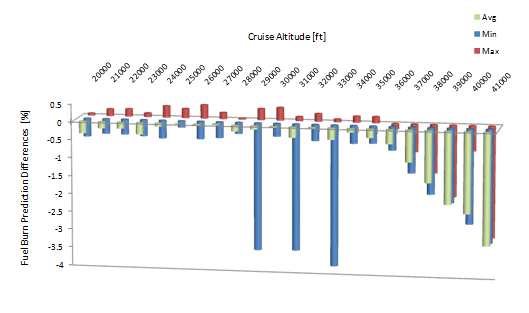 Minimal, maximal and average differences between the fuel burn values predicted by the algorithm and the CMA9000PTT, function of the cruise altitude, evaluated on a set of test configurations for the Airbus A310 aircraft performance model. [Img8]

For a more comprehensive discussion about “Fuel burn prediction algorithm for cruise, constant speed and level flight segments”, we invite you to read the following Research Paper published by the Royal Aeronautical Society in its May 2013 issue of the “The Aeronautical Journal”:

Click on these links to get more information regarding LARCASE Research Laboratory completed and ongoing projects and their research publications.