Move your Jaw to Recharge your Hearing Aid! - By : Aidin Delnavaz, Jérémie Voix,

Move your Jaw to Recharge your Hearing Aid!

Header picture is a courtesy of Ervin Stuber, source.

ON A WEEKLY BASIS, hundreds of millions of users worldwide must replace the button cell batteries in their hearing aids. Unfortunately, batteries are a source of environmental waste, a financial burden and somewhat time-consuming and requiring good dexterity to change. What if hearing-aids could be self-powered?

As alternatives to batteries, energy harvesting technologies are increasingly gaining interest. Energy harvesters, which are able to recover small amounts of energy from external sources such as solar power, thermal energy, or human body, are usually suitable for low power portable or wearable devices. Hearing aids are among wearable medical devices which have been substantially modified in recent years and are becoming less energy consuming. 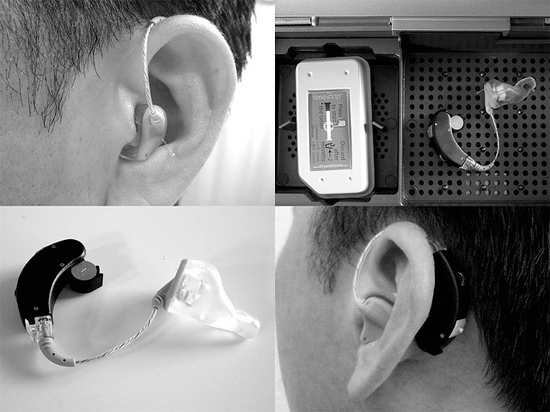 Therefore, energy harvesting could be successfully applied to them. In addition to hearing aids, other types of in-ear devices such as electronic hearing protectors and communication earpieces could also benefit from energy harvesting technologies.

This research project to replace hearing aid batteries by energy harvesting technologies is important for Dr. Aidin Delnavaz, a postdoc researcher working on this project. It reminds him his grandmother who suffers from hearing loss and hardly goes anywhere without her hearing aids. “She always complained about her unit due to problems caused by batteries. Sometimes these hearing aids fail at parties, family evenings or during telephone conversation” explain Dr. Delnavaz.

The researchers have started by considering different sources of energy. Since the user wears the hearing aid, one possible power source would be the user and another would be the user’s environment. Several innovative ideas have been recently proposed to use energy harvesting to power hearing aids. Below you can find some ideas of energy harvesting for hearing aids that have been protected as a patent. Light, body heat, electromagnetic waves, speaker vibrations, and radio frequency waves are sources of energy which have been already proposed for this application. 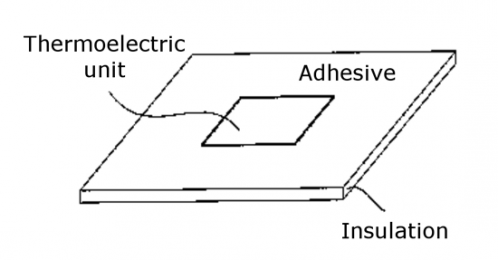 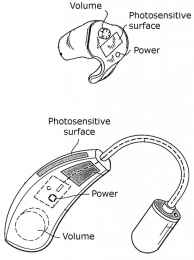 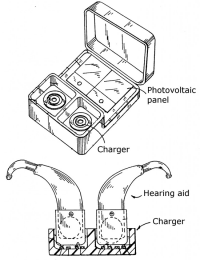 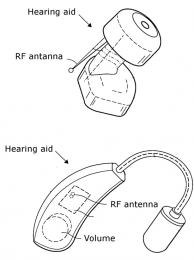 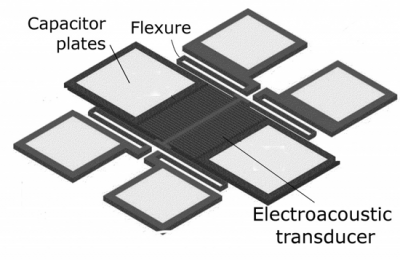 While the hearing aid solar charger is an improvement, its battery power capacity is still limited and users must always rely on a solar charger, which is cumbersome and inconvenient. Some disadvantages can be assumed for other above-mentioned inventions that place them in an unfavorable position. For example, using photosensitive surface directly on the shell of the hearing aid requires more exposed externally section in order for the photocell to produce electrical current when exposed to ambient light. In practice however, hearing-aid users frequently request that the device be completely in the ear canal (CIC), that is, not visible from the outside: this reduces sunlight exposure to the point of discouraging the use of solar power for hearing aids. The main drawback of the thermoelectric system is that its thermal efficiency is highly influenced by ambient temperatures and radically drops in warmer environment. In case of energy harvesting from ambient radiations such as electromagnetic or infrared, their fundamental dependency upon the amount of energy available in the area of application significantly restricts their widespread usage. 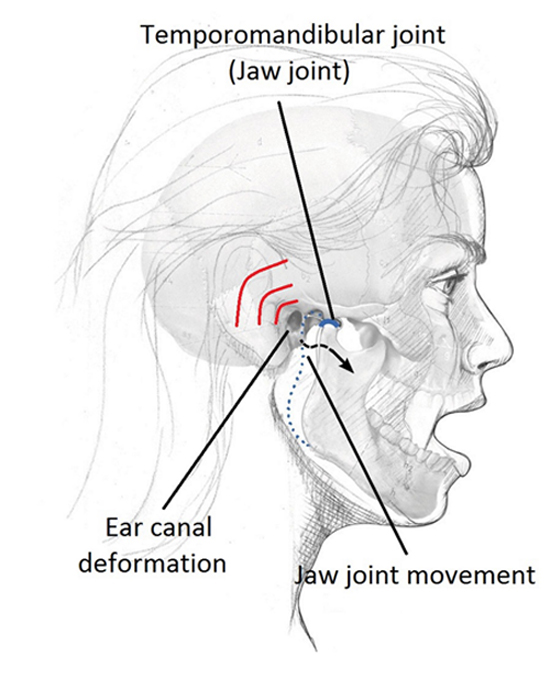 The challenge of this project was to find a source of energy close to the ear canal to recharge the hearing aid. Ear canal is a dynamic environment. Indeed, opening the mouth contracts the face muscles and pulls the lower jaw down. Since the lower jaw is articulated to the head very close to the ear canal, its displacement deforms the soft tissue of the ear canal wall. Therefore, in each cycle of opening and closing the mouth, the ear canal deforms and then returns to its pre-deformed shape. This cycle occurs thousands of times during a day while chewing, eating or speaking and can be considered as a source of energy for hearing aids. The magnitude of ear canal deformation varies among individuals. We could measure it by comparing 3D images of ear impressions at two extents of the jaw excursion: open jaw and closed jaw. The following video shows the overlay 3D images of open jaw and closed jaw ear impressions for a typical ear canal. 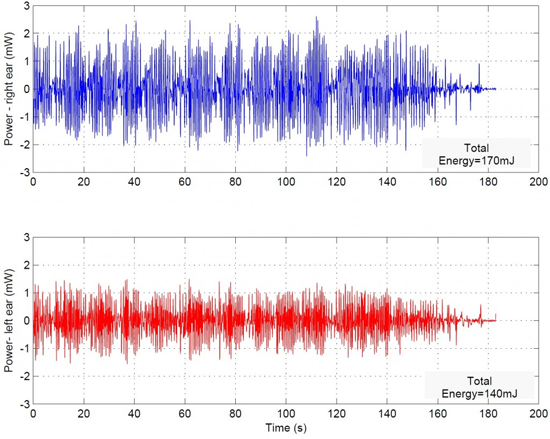 The objective of our invention is to provide an in-ear technology for harvesting energy from the ear canal dynamic motions in order to power electronic circuits of hearing aids. Therefore, the desirable hearing device must be capable of being adapted to be placed inside the ear canal and having the contour of the ear canal wall.

Fortunately, Sonomax Technologies Inc., a Quebec company specialized in hearing protection technologies and the industrial partner of our laboratory at ÉTS, has a patented technology based on inflatable earpieces to make a pair of custom-fitted earplugs only in 5 minutes. An advantage of our invention is integrating the energy harvesting module into this custom-fitted earpiece to provide a platform in which the required electronic components (for example a microphone, a digital signal processor and a speaker in case of the hearing aid) can be added to form a custom-fitted self-powered in-ear device. Another advantage is that the energy harvesting module is essentially transparent to the user of the in-ear device, that is, there is no electrical connection extending out from the in-ear device, no battery to periodically replace, no significant weight added to the in-ear device, etc. Also, the energy harvester device allows the electronic components to be powered on purpose by a jaw-joint activity, such as chewing gum, eating a solid meal, etc.

.
In one embodiment of this invention, the energy harvesting module consists of a flexible piezoelectric film. It is formed in a hollow cylindrical shape and is adapted for being embedded inside the settable area of the in-ear device between a rigid core and the sheath. The settable area receive silicon medical rubber that remains generally flexible once set so as to transmit the dynamic motion of the ear canal wall to the energy harvesting module. The film electrodes are connected to a power management unit which is responsible to receive produced charges, store them and supply the power demanded by the electronic components. 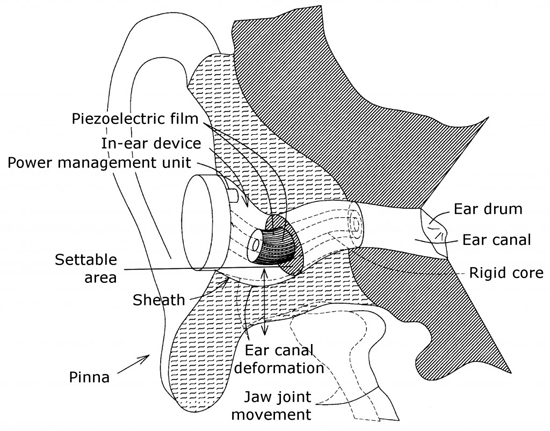 We invite you to listen to an interview given by Dr. Aidin Delnavaz in french sunday, May 25th 2014 as part of the series “Doc Postdoc“ at “Les années lumières” program at “ICI Radio-Canada Première” radio station: Audio document 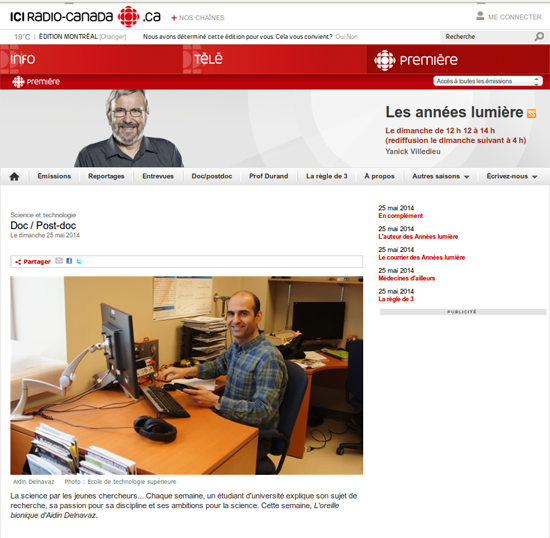 For more information about ear canal deformations and variations, we invite you to read our research paper published in the Journal of Applied Physics :

For more information about measuring the energy capacity of the ear canal dynamic motion, we invite you to read our research paper published in IEEE Transactions on Industrial Electronics :

For more information about the flexible piezoelectric film energy harvester and the experimental results, please read our research paper published in the Journal of Micromechanics and Microengineering:

For more information about other embodiments of this invention, please see our patent application :

We also invite you to consult the “Chaire de recherche industrielle en technologies intra-auriculaire Sonomax-ÉTS” (CRITIAS) website for more informations on our research chair. We are looking for students and researchers for undergraduate projects, Masters and PhD projects and also for test-subjects.

Aidin Delnavaz is a Postdoc Fellow working at ÉTS. He is researching on energy harvesting mechanisms for in-ear devices at CRITIAS.

Jérémie Voix is a professor in the Department of Mechanical Engineering at ÉTS and holds the NSERC-EERS CRITIAS Chair. His research interests include noise control, advanced hearing protection, mechatronics, and signal and data processing.