Morpheus: A hybrid between rockets, drones and helicopters! - By : Substance,

Morpheus: A hybrid between rockets, drones and helicopters! 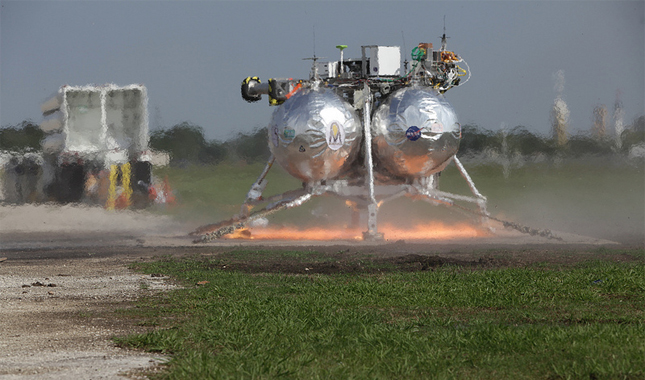 The new planetary lander prototype, Morpheus, being tested by the NASA, distinguishes itself with its capacities to hover as a helicopter, fly in the air at low altitudes in its environment and to take-off and land upright on rocky and unstable ground, such as those of the Moon and Mars.  The prime objective of this project is to experiment new technologies in order to enhance the efficiency, life length and overall costs of future space exploration vehicles.

In this respect, the Morpheus prototype may not survive in its actual arrangement, but its features and abilities of free movements may very well be potentially burrowed and reused in some others planetary landers to come.  The future missions to Mars and other interplanetary locations, including asteroids, could then benefit of this prototype capabilities.

A new propulsion system using liquid oxygen and methane as fuel has been elaborated for Morpheus.   Thes two compounds are considered as green components that could be produced as an energy source from elements directly available on other planets. 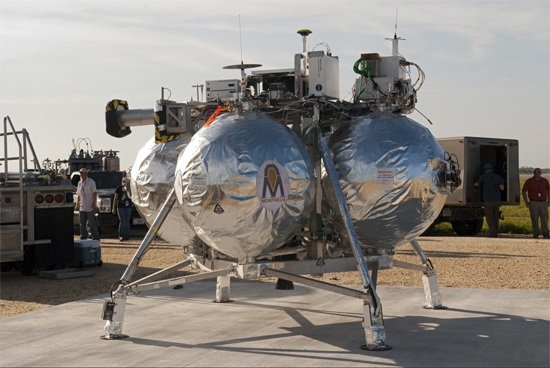 Morpheus lander, a vertical test bed vehicle, has been set up at its launch position along the runway at the Shuttle Landing Facility, or SLF, at the Kennedy Space Center.  Credit NASA.

To learn more on this project, visit the NASA web site.