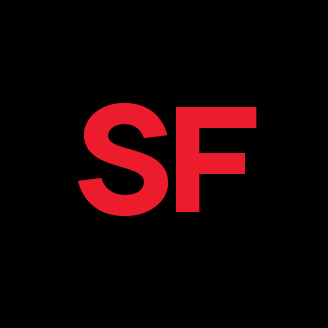 Header picture is from the authors: Substance CC license applies.

The approach and landing are ones of the most critical and demanding phases of a flight – both for the aircraft and the crew. The low altitude and speed ranges, characteristic for these phases of the flight, result in smaller safety margins relative to flight trajectory deviations, weather conditions, errors and malfunctions.

An approach and landing is conducted according to a navigation procedure that is specific for the runway and airport. This procedure, described by an area navigation chart (RNAV chart) elaborated by the regulatory authorities, specifies the flight path (the horizontal and vertical components of the flight trajectory) that has to be followed by an aircraft in order to have a safe separation from the terrain and the obstacles situated on the ground, and reach the runway threshold at the required altitude and with the required attitude. Additional guidance from the Air Traffic Controller (ATC) and / or Approach Controller (Approach) ensures a safe separation between successive aircrafts on approach/landing path and that the runway is available for landing (cleared from other aircrafts or obstacles).

During the approach and landing the flight trajectory, aircraft status (flight parameters and configuration), weather conditions (visibility, winds etc.) and external factors (separation from other aircrafts, runway clearance etc.) are closely monitored relative to their expected and acceptable status. If an issue that might pose a safety risk is identified, and the aircraft is considered capable to safely climb and fly, the approach or landing are aborted and the crew initiates a “Go Around” – an emergency climb to a safe altitude where the situation can be further assessed and corrective actions can be taken. An aborted approach is called “Missed Approach” and an aborted landing is called “Rejected Landing”.

The flight trajectory for the Go Around, corresponding to a Missed Approach or Rejected Landing, is executed according to a specific navigation procedure, called Missed Approach Procedure, included in the approach RNAV chart. It indicates the Lateral Navigation (LNAV) and Vertical Navigation (VNAV) profiles that ensure a safe separation between the aircraft and the obstacles on the ground and is not in conflict with the other aircrafts in the area. The Missed Approach Procedure includes a holding pattern, a circling flight trajectory that can be used either to assess the aircraft status and take the corrective actions or as a means to retain the aircraft in a safe area until it is possible to reintegrate it in the approach path traffic.

The objective of the paper presented in this review is to evaluate the additional fuel burn and Green House Gas (GHG) emissions corresponding to a flight segment, determined by a missed approach decision, and to analyze the influence of the LNAV and VNAV profiles on the results. The study was conducted for a Boeing 737-400 (B734) aircraft at Seattle’s King County International Airport / Boeing Field runway 13R (BFI RWY 13R) and is based on the specific RNAV chart for BFI RWY 13R. 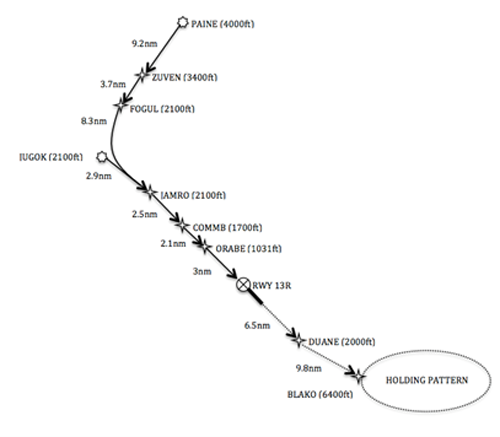 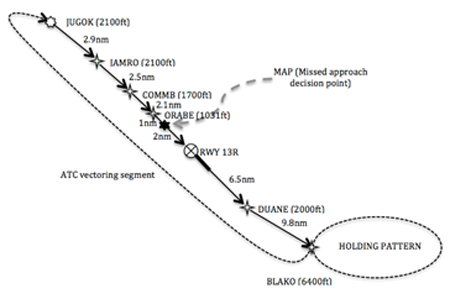 The methodology ([2], [3]) and the reference data ([4]) used in the study were those put in place by the European Environment Agency (EEA) for aircraft operators, in order to evaluate the fuel burn and GHG emission for their fleets. This methodology establishes a standard flight profile model ([3]): it divides the flight profile into a succession of flight phases and sub-phases, based on the aircraft’s altitude relative to threshold altitudes. The reference data provides typical average fuel burn and GHG emissions for different models of aircraft, flight lengths and flight phases (according to the standard flight profile model).

The results indicate that the total length of the flight segment, determined by the missed approach procedure, is the main factor that affects the supplementary fuel burn and GHG emissions. For the evaluated aircraft model (Boeing 737-400), RNAV procedure for BFI RWY 13R and VNAV flight profiles, the missed approach flight segment with a 20 nautical miles holding pattern produces a supplementary 19.6 % fuel burn, 26.4 % carbon oxide (CO), 17.5 % nitrate oxides (NOx) and 32.5 % hydrocarbon (HC) emissions compared with a direct vectoring ATC segment. For an identical LNAV profile, the difference between the two VNAV profiles evaluated in the study is relatively small: 0.02 % for the fuel burn, 0.9 % for CO, 1.7 % for NOx and 7.5 % for HC emissions.

A comparison between the fuel burn and the GHG emissions for a flight segment corresponding to a missed approach, without holding pattern, performed by a Boeing 737-400 aircraft at BFI RWY 13R and standard flights of different total lengths is presented in Figure 4. 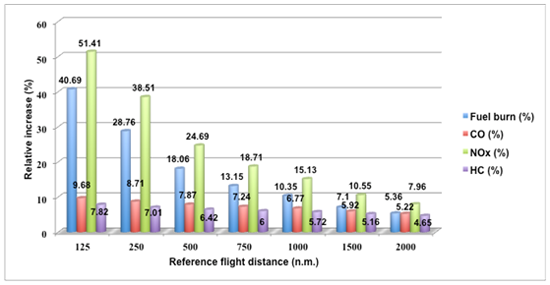 These values are the minimum obtainable for the Boeing 737-400 and RNAV procedure. As seen in the previous paragraph, an increase of the flight trajectory length, corresponding to a holding pattern, will introduce an important additional penalty in fuel consumption and GHG emissions.

For a more comprehensive discussion about “Missed Approaches and Rejected Landings – Economic and Environmental Impact”, we invite you to read the following Research Paper, presented at the AIAA Aviation Technology, Integration, and Operations Conference in 2013 and submitted for publication in the Royal Aeronautical Society’s “The Aeronautical Journal”:

This study is part of the research conducted at Research Laboratory in Active Controls, Avionics and Aeroservoelasticity (LARCASE) in collaboration with CMC Electronics Esterline, in the field of flight trajectory optimization algorithms for Flight Management Systems. The results of these research activities were presented in conferences and published in specialized journals ([5], [6], [7], [8], [9], [10], [11], [12]).

For more information about the current projects and the research activity at LARCASE please visit the website.

Radu Dancila is a Ph.D. candidate at ÉTS and Research Assistant at the LARCASE conducting research in the field of flight trajectory optimization strategies and algorithms.