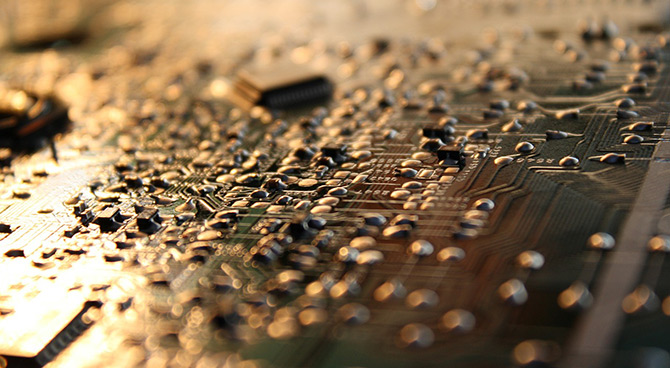 This article highlights a new breakthrough in flow-battery technologies for the miniaturization and autonomy of small electronic devices. Researchers at the Federal Institute of Technology and IBM Research, both in Zurich (Switzerland), created a redox vanadium battery (or vanadium oxidation-reduction battery) that can power electronic chips and dissipate the heat they produce.

The concept is to integrate this tiny battery into electronic components such as microprocessors and light-emitting diodes. This involves assembling a multilayered chip that has a computer chip, followed by a thin micro-cell battery that powers and cools the chip, followed by another computer chip, and so on. This means that future electronic chips, in which individual chips are stacked to save space and energy, will be completely autonomous, according to Dimos Poulikakos, Professor of thermodynamics at the Laboratory of Thermodynamics in Emerging Technologies. Note that the redox batteries currently available on the market present drawbacks that can impede their integration in small components and devices for private use. Indeed, their energy/volume ratio is relatively low. Furthermore, this expensive system presents toxicity risks and is complex compared to standard batteries. Existing flow batteries are used in stationary electricity storage technologies, such as wind farms and solar power plants, to temporarily store the energy produced and use it later.

In the flow battery created by the team, an electro-chemical reaction is used to generate electricity by pumping two liquid electrolytes into the battery cell from outside. These liquid electrolytes dissipate excess heat through a closed loop circuit. The battery is 1.5 millimeters thick. The energy produced by this new micro battery also reached a record in terms of its energy/surface ratio. Indeed, it is capable of releasing 1.4 watts per square centimeter of surface. Even excluding the power required to pump the liquid electrolytes into the battery, the resulting net power density is still 1 watt per square centimeter. In addition, electrolytes use moderate concentrations of 0.4 M K4Fe (CN)6 and 0.2 M 2,6-dihydroxyanthraquinone in alkaline electrolytes.

According to the researchers, the greatest challenge in the production of this new battery was the electrolyte circuit. Indeed, it was necessary to keep the pumping power as low as possible in the micro-fluid multi-channel networks including the internal configuration of the closed loop. Electro-chemical reactions occur in two thin and porous electrode layers that are separated by a membrane. The researchers used 3D printing technology to build a polymer channel system that facilitates the flow of electrolyte liquid into the porous electrode layer. The tests showed that a zigzag structure of wedge-shaped channels was the most suitable model given the constraints of circulating liquids.

The researchers noted that this battery can optimize the operation of other applications, such as lasers, which must be constantly powered and cooled, and solar cells, where the electricity produced could be stored directly in the cell of the battery for later use. The system could also maintain the operating temperature of the solar cell at the optimal level.

The scientists produced a first functional prototype of a small flow battery. Although its power density is very high, the electricity produced is not yet fully sufficient to operate a chip. In addition, large flow batteries could also be more efficient by forcing the electrolyte liquids to pass through porous electrodes. At this stage, in order to perfect the prototype it becomes necessary to collaborate with industrial partners.