Making the Most of Additive Manufacturing: Facing the Challenge

Additive manufacturing processes allow overcoming most of the design-related limitations. However, to make the most of this technology, it is necessary to design parts specifically for this process. From this standpoint, an aircraft part has been designed by using the topology optimisation method. Since “optimal” part is non-existent, two different “optimized” part designs have been realized, manufactured and compared to the initial part, regarding their mechanical performance. This study revealed different issues related to the selective laser melting process.

It is often assumed that additive manufacturing (AM) will overcome the drawbacks in design and produce parts that will come directly from the imagination of their designers. However, the technological constraints of the different AM processes bring significant restrictions. Consequently, to make the most of this technology, it is necessary to design parts specifically for the additive manufacturing process. Three students of the Shape Memory Alloys and Intelligent Systems Laboratory (LAMSI)

of the École de technologie supérieure (ÉTS), in Montreal, have met this challenge by reviewing the design of a part usually produced by conventional methods. In this article, the students expose their approach to redesign a selected structural part with an objective to maximize its performances using AM.

Presentation of the Part and its Design Requirements

The experiment originated from a proposal for the GrabCAD design competition, sponsored by the Fastening Systems & Rings d’Alcoa[1]. The selected part for this study comes from an aircraft and has relatively simple shape: it can be found, for example, in the door hinges of the landing gear.

In this case, the design of the part envelope (represented by the gray portion in the figure below) is defined by the assembly requirements. The part is attached to a plate with four screws and is equipped with a spherical bearing at the tip. 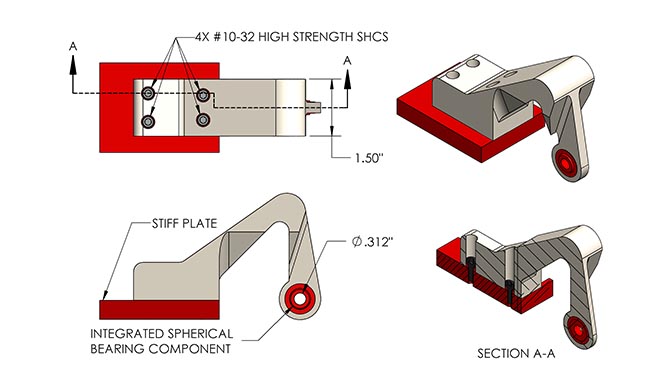 Figure 1 Original part to be optimized

As shown in the figure below, this part has three separate loading cases that were determined based on their service conditions. The specified material is 15‑5PH stainless steel. The maximum stress value (Von Mises) induced in the part must not exceed 1000 MPa (the design safety factor is included in the loading cases).

The competition also requires the use of the selective laser melting (SLM) process [4], subjecting the design of the part to the technological constraints that come with this process.

The optimization process of a structural part can be divided into five stages (as presented in the following diagram). Each of these steps requires the use of a separate engineering tool. Throughout the process, the designer must keep in mind the manufacturability of this part using the SLM technology. Contrary to popular belief for example, SLM manufacturing requires the use of supports for each overhanging (non-self-supporting) portions of the part[2]. In fact, the powder bed has a much lower density than the manufactured part. Therefore having no supports would cause the collapse of some portions of the part. 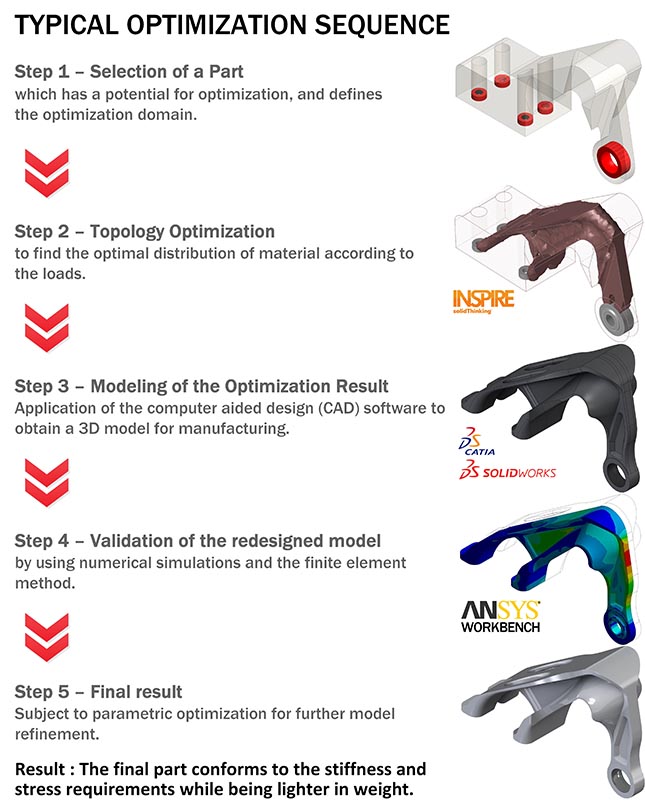 To review the original design of the part, different topology optimization

tests were performed using the INSPIRE software from solidThinking®.

Topology optimization uses the finite element modeling method to find the ideal material distribution in a given volume, in order to reach one or multitude of the design goals. Often, these goals are to maximize the stiffness (less displacement when loaded) or to minimize the mass of the parts, while preventing part failure during service [3].

Modeling of the Optimization Results

The topology optimization results represents only the overall geometry of the final part. The designer has to remodel the part with a computer-aided design (CAD) software. Two parts which were obtained by using the CAD software Solidworks ® (optimization A) and CATIA ® (optimization B) are represented in figure 4. The marked difference which is observable between these two parts proofs that there exists a number of optimized parts, but never “THE OPTIMAL” part.

Figure 4 Settings for two optimization approaches and the modeling results

Validation of the Redesigned Model

After this, the new models were verified according to the design requirements

using the finite element method (FEM) simulation software. In this case, the ANSYS® Workbench was used.

Here, different loads were applied in succession and the design criteria were validated. In most cases, the modeling and validation phases require a number of iterations. Ideally, this geometric refinement stage uses a parametric optimization feature that interconnects the CAD and the FEM software.

Numerical simulations permit to compare the results of different optimization approaches. For this reason, the maximum equivalent stresses, the maximum total displacements of the spherical bearing axis for each of the three loading cases, as well as the masses of two different designs are represented in the table below and compared with the initial design.

Table 1 Comparison of the optimization, modeling and simulation results. * Note that in all cases, parts A and B withstand the applied loads.

The preparatory work for manufacturing consists of the

addition of supports (areas marked in red in the figure below) and selection of the part orientation in the AM system. This choice greatly impacts the manufacturing time as well as post-manufacturing operations when removing the supports. This preparation was done using the Magics software, developed by Materialise.

Despite extensive knowledge of the SLM-related technological constraints, the first manufacturing attempt was unsatisfactory as is shown in the following figures. These manufacturing defects can be explained by insufficient supports and their inappropriate configuration. Nevertheless, the addition of new supports led to successful production in the second attempt. 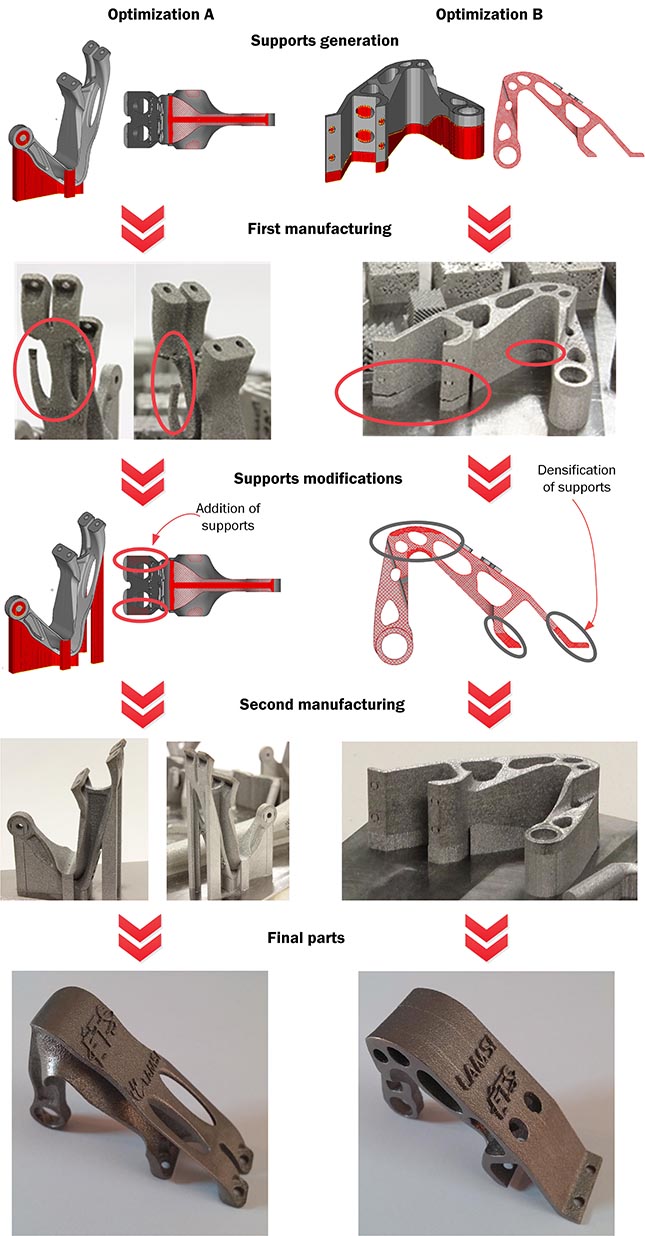 Figure 5 Manufacturing steps of the parts

Bruno Jetté is a masters’ student in mechanical engineering at the ÉTS. His projects focus on structural optimization of parts for additive manufacturing by incorporating regular lattice structures.

Morgan Letenneur is a postdoctoral fellow at LAMSI laboratory of ÉTS. His areas of research are 3D printing of metal alloys, non-destructive X-ray control and fracture mechanics.

Mykhailo Samoilenko is a masters' student in mechanical engineering at ÉTS. His projects include the study of fuel combustion phenomena in cell structures produced by additive manufacturing.