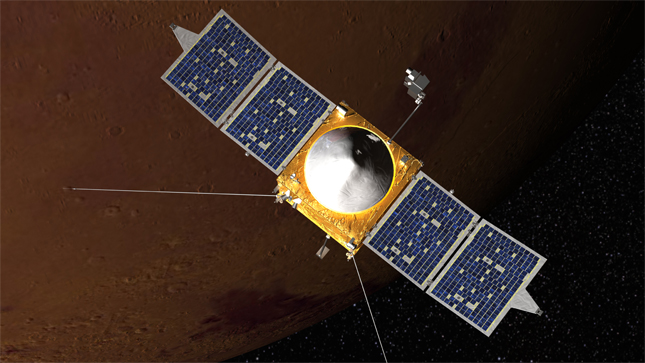 NASA successfully launched MAVEN (Mars Atmosphere and Volatile Evolution) spacecraft to the planet Mars on Monday November 18th at 1 :28 p.m. EST from  Cape Canaveral, Florida.  The spacecraft arrival to Mars is scheduled for the end of September  2014.

The mission main objective is to analyze Mars atmosphere evolution to help understand the conditions that lead to the space loss of its volatiles compounds, including CO2, NO2, and H2O.  Through the analysis of Mars upper atmosphere, scientists wish to better understand the planet transformation into a desert environment.  Upon its arrival to the planet, the spacecraft will establish itself in orbit round Mars, deploy its instrumentation and initiate its scientific mission planned to last over a full year.  MAVEN mission participates to the complete exploration force of the Red Planet in view of human missions by the 2030’s.