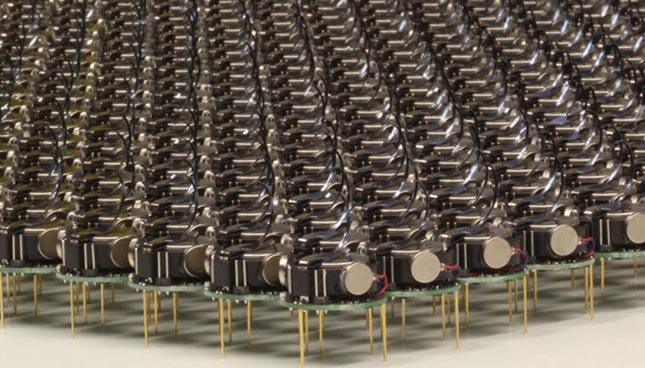 A new study, recently published in Science and led by Radhika Nagpal, professor at the Harvard Wyss Institute for Biologically Inspired Engineering, presents an experiment with 1024 robots created to work together in achieving a predefined task. They were designed to be a low-cost system for the study of large-scale robotic collective behavior.

Their goal was to show that robots can organize themselves to create geometric shapes, which is an important step in the development of collective artificial intelligence. This is the first time that collective algorithms have been validated with such a large number of robots and at such a low cost. Each robot costs approximately US$14. The drawback of this low price is their individually low capabilities. The power and complexity of the system are due to the high number of units. This model was greatly inspired by biology, namely the behaviour of termites.

Named Kilobots, these small circular three-legged robots, 33 mm (1,3 in.) in diameter and 34 mm (1,34 in.) in height, collaborate and self-organize into predefined forms, as shown in the pictures below.

The robots have two vibration motors that allow them to move on a firm surface. The majority of algorithms for collective robots use local communication, i.e. robot to robot. Each Kilobot has an infrared transmitter and receiver for sending and receiving messages from all directions. This allows it to communicate and measure its proximity to its neighboring Kilobots. However, these robots are blind and therefore do not have any overview of a situation.

For the experiment, the researchers used 1024 robots simultaneously controlled by infrared light, as shown in the video below.

The Kilobots never give up! The algorithm was developed by researchers to optimize their movements and correct errors. If a robot moves off course, a common mistake in a large group, the nearby robots sense the problem and work together to solve it.

For now, the Kilobots provide a critical test for collective artificial intelligence algorithms, such as collective synchronization and positioning. They produce the form requested by researchers and follow an algorithm to create a 2D shape with no human intervention. However, the long-term goal is for artificial swarms to determine their own strategy to achieve a common goal.