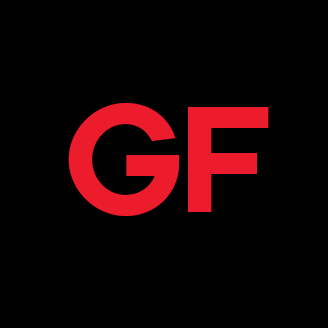 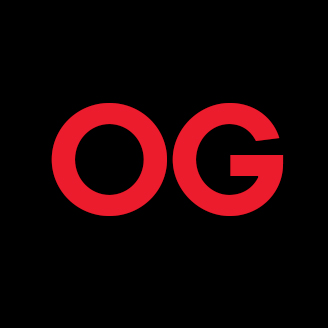 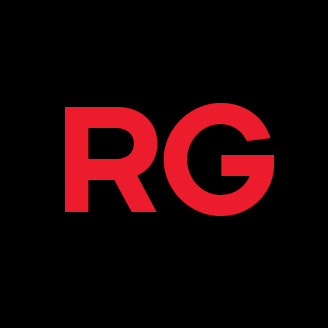 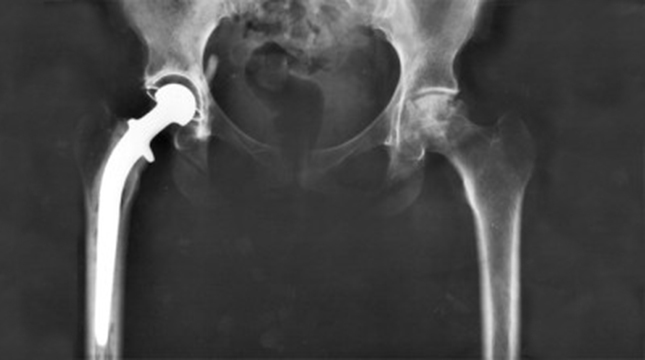 This article presents the final year project of a group of mechanical engineering students at ÉTS. The lead author, Bruno Jetté, graduated from Cégep de Saint-Jérôme in Mechanical Engineering before pursuing his studies at ÉTS.

This paper presents the design and manufacturing path leading to the creation of a biomimetic low-stiffness hip prosthesis. This path is based on the use of metallic porous structures and additive manufacturing technology. The retained concept has undergone numerical simulations and mechanical testing, and it stiffness comes close to that of bone.

A hip prosthesis is mainly composed of a femoral stem and a spherical joint combined with an acetabular cup (see Figure 1). In general, the femoral stem is manufactured from biocompatible metals but metals are much stiffer than human bone, which leads to a non-uniform stress distribution in the instrumented femur known as “stress shielding”. This phenomenon results invariably in bone resorption or bone loss in the femur tissue surrounding the implant. Over the long-term, the femur weakens, can develop cracks which would require prosthesis replacement surgery (Beaupré, Orr et Carter, 1990; Ridzwan et al., 2007). Such a replacement requires a lot of care and causes prolonged patient convalescence. 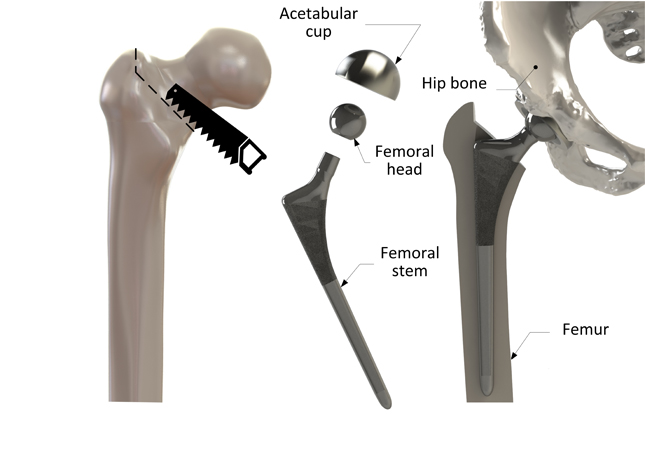 According to the Canadian Joint Replacement Registry (CJRR) and the Canadian Institute for Health Information, the number of hip prosthesis replacements has more than quadrupled over the last 10 years (CIHI, 2004; 2014). Based on these numbers, l’Institut Calot (France) determined that the lifetime of a traditional, complete hip prosthesis varies between 15 and 25 years (Cazenave, 2011). In view of the aging population and the fact that more and more young people are receiving hip arthroplasty (surgical procedure involving the installation of a hip prosthesis), it is imperative to optimise the femoral stem mechanical characteristics to mimic as close as possible the intact femur (Gard, Iorio et Healy, 2000).

In the winter session of 2015, this engineering challenge was addressed by a Bachelor of Mechanical Engineering end-of-studies project at École de technologie supérieure de Montréal (ÉTS). The project team consisted of four final-year students, Bruno Jetté, Guillaume Fréchette, Robin Gaudreau and Olivier Guillemette, who were supervised by Patrick Terriault and Vladimir Brailovski, professors in ÉTS Mechanical Engineering Department as well as co-directors of the Shape Memory Alloys and Intelligent Systems Laboratory (LAMSI). In addition, M. Brailovski holds the ÉTS Research Chair on Engineering of Processes, Materials, and Structures for Additive Manufacturing (CIFA).

In concrete terms, the project objective aimed at designing a femoral stem exhibiting flexibility comparable to a healthy femur. The prosthesis design was based on an additive manufacturing process.

The strategy consisted in  modeling a femur/femoral stem assembly that exhibits the same displacements as an intact femur when subjected to typical loads. The model would then be used to evaluate the femur/femoral stem assembly flexibility and compare it to that of a healthy bone. The concept was evaluated using a single type of load, the stair-descent. This ordinary, repetitive motion results in application of particularly-large forces on the hip (Bergmann et al., 2001; Morlock et al., 2001). The load was determined for a hypothetical 1.83 m (6 ft.) tall, 100 kg (220 pounds) patient and the 3D models for the femur and the femoral stem were determined accordingly (Heiner et Brown, 2001) (see Figure 2). 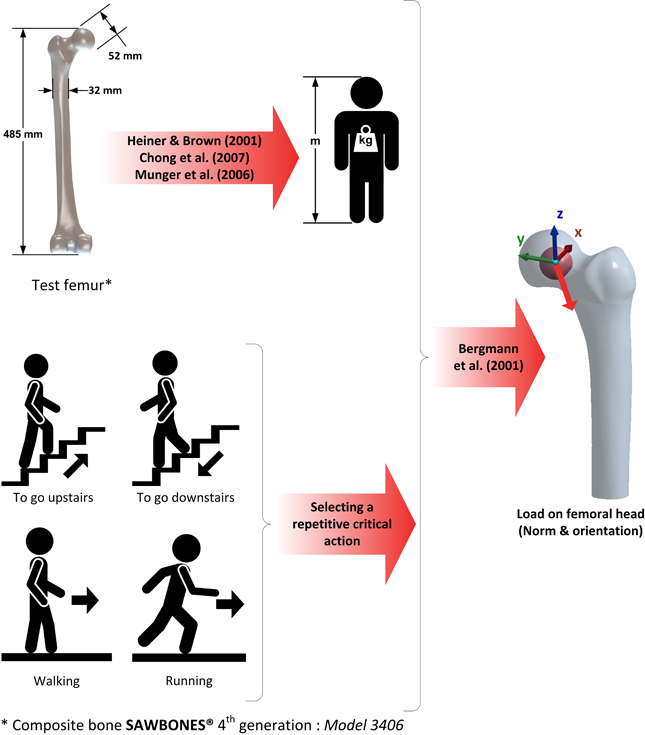 Computer simulations were carried out using ANSYS Workbench 15 in order to evaluate and compare the various displacements as a function of load applied to the intact femur as well as to the femur/femoral stem assembly.

An open-porosity cellular structure was modelled for the central portion of the femoral stem (see Figure 3). 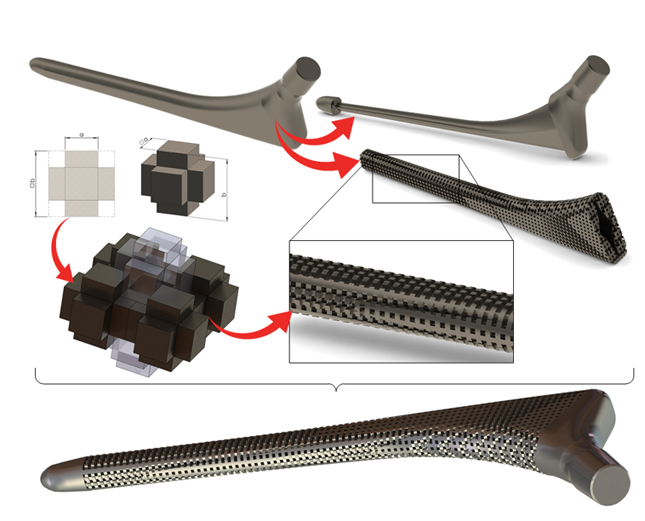 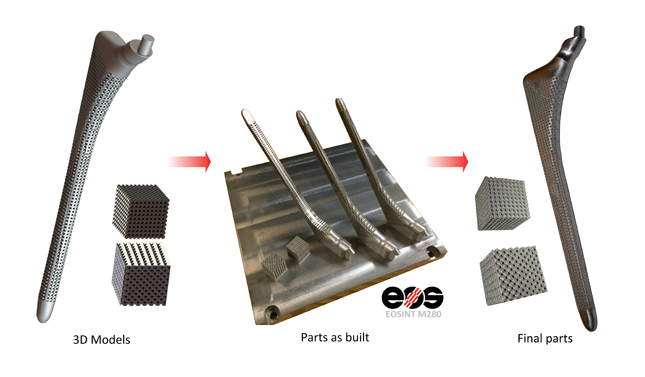 Computer modeling and, mechanical testing were used to assess the stiffness of the manufactured stem prototype. For this purpose, the combined numerical-experimental approach was used to characterise the relationship between the overall deformation of the femoral stem and the application of an experimental load (see Figure 5). 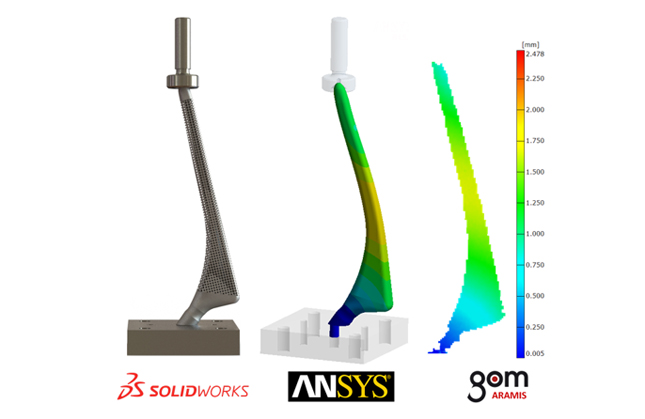 Figure 5 Mechanical Testing and Characterisation of the Stem Behaviour as a Function of Load. On the left: The bench-test, 3D model. In the centre: The finite-element model was adjusted to correlate the measurements made during mechanical testing using an ARAMIS optical data acquisition system (on the right).

The results of the mechanical tests and computer simulations have shown  a significant improvement in the femoral stem flexibility facilitated by its porous structure. Technically, a 0.58 mm displacement at the load application point of 3097 newtons was considered as a target displacement, since it corresponded to that of the intact femur under the same load. In the study, the mechanical response obtained with the femoral stem containing the porous structure yielded a displacement of 0.56 mm, which is only 3% below the target. The computer model of a femoral stem without a porous structure, i.e. completely solid, resulted in a displacement of 0.43 mm, which is more than 25% below the target. A comparison of these load configurations is shown in the following figure. 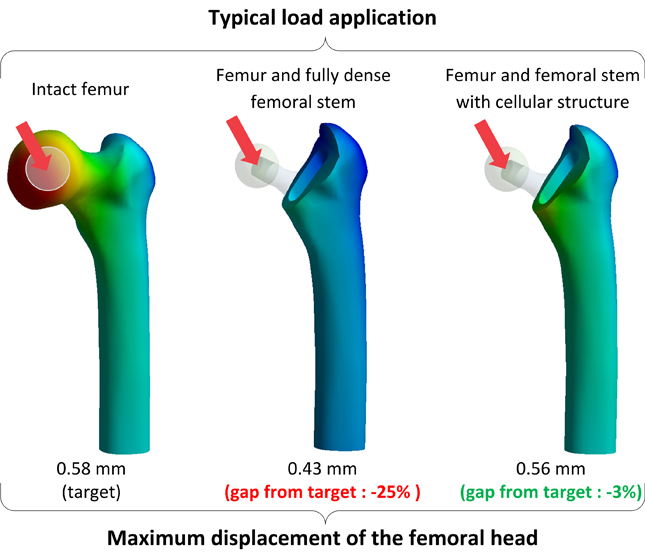 In summary, it has been shown that femoral stem prototypes made in this study highlighted the potential of additive manufacturing processes to create complex geometric shapes. Furthermore, by integrating such complex structures into a specific part, additive manufacturing has allowed the replication of a targeted mechanical behaviour.

Bruno Jetté is a masters’ student in mechanical engineering at the ÉTS. His projects focus on structural optimization of parts for additive manufacturing by incorporating regular lattice structures.

Guillaume Fréchette is a Bachelor final-year student in Mechanical Engineering at ÉTS. He will begin a Master degree in the winter session of 2016 with the Institut de recherche d’Hydro-Québec (IREQ).

Olivier Guillemette is a Master student in the Thermo-fluid for Transport Laboratory (TFT) at ÉTS and his projects thesis are on computer modeling of fuel injection in a jet engine.

Robin Gaudreau has a Bachelor degree in Mechanical Engineering from ÉTS and works as a technical designer/draftsman in the industrial manufacturing field.