Impacts of Earthquakes and Soil Characteristics on Isolated Bridges 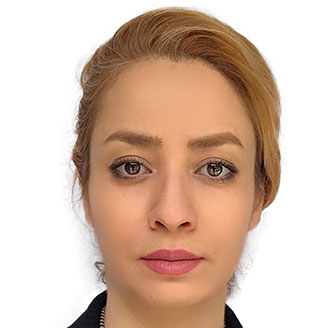 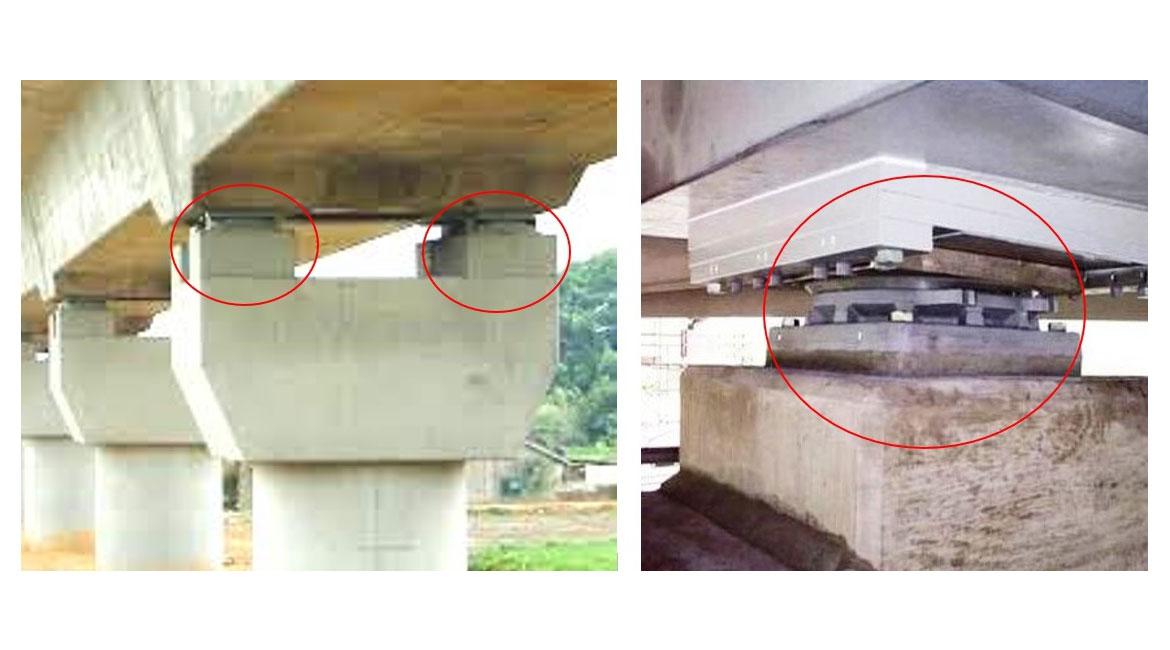 Provided by the authors. CC License

Abstract Seismic isolation technology is an effective means of reducing seismic risk and enhancing structural seismic performance. However, some parameters‎ affect the efficiency of this technology, namely earthquake inputs and soil characteristics. In investigating ‎the simultaneous effects of earthquakes and soils on isolated bridges, an isolated bridge is assumed to be at different distances from the ‎ruptured fault (Rrup) to represent near-fault (NF) and far-field (FF) situations, extracted from different soil characteristics. ‎Responses of Nonlinear Time History Analyses (NTHA) demonstrate that for NF ‎zones taking into consideration the effects of soil is imperative. On soft soils, not considering this effect during the design stage results in largely insufficient displacement and force capacities of the isolated bridge system, seriously harming its seismic performance. Keywords: Seismic Isolation, Earthquake Characteristics, Near-Fault, Far Field, Effects of Soil, Bridges.

Many regions in the world and in Canada are prone to moderate to strong seismic activity that harms the safety and functionality of structures. Bridges are one of the most critical infrastructures in today’s society, serving as crucial arteries in transportation systems, especially in times of crisis, such as the period following a major earthquake. These infrastructures are particularly vulnerable to seismic action. Seismic isolation is an efficient technique which was developed in recent decades to mitigate seismic risk for important infrastructures. This technology allows reducing seismic forces and building more economic structures, thus contributing to the protection of the environment and the circular economy.

Seismic isolation technology is based on decreasing the fundamental frequency of structural vibrations to a value less than the predominant energy-containing frequencies of an earthquake in order to reduce the seismic force demand (Soneji & Jangid, 2008). Also, seismic isolation incorporates an additional damping mechanism to control the displacement demand. According to studies and based on evidence from past earthquakes, record characteristics and soil effects are two of the most important parameters impacting seismic performance of isolated structures (Jónsson et al., 2010; Roussis et al., 2003).

In fact, seismic ground motion is affected by the nature of a site and can be significantly amplified. More notably, ground motion from near-faults contains long velocity pulses with a very high peak displacement demand. Seismic isolation systems are vulnerable to such peak demands where their displacement capacity can be altered, which can seriously threaten their operation and, thereby, the very safety of the bridge.

This study aims to better understand the simultaneous effect of site conditions and fault distances on the performance of seismically isolated bridges and seeks to identify ways to mitigate the negative impact of near-fault earthquakes on seismic isolation systems.

Model of the Studied Isolated Bridge

In this study, 21 earthquake records were extracted from the PEER database website (PEER Strong Ground Motion Databases). Nine of them were within 10 km of the epicentre (Rrup <10 km) and seen as NF records (Bray & Rodriguez-Marek, 2004). NF records have higher characteristic values, especially in terms of Peak Ground Velocity (PGV), specific energy density, and damage index (Attalla et al., 1998; Malhotra, 1999). These records were registered on different soil conditions ranging from hard rock to very soft clay. Soil type is illustrated below as shear wave velocity, Vs. The higher the Vs, the stiffer the soil.

The selected case study bridge with conventional and isolated designs was chosen from Alper Ucak’s research work (Ucak & Tsopelas, 2008). The bridge has two equal spans braced on a circular ‎‎5.2 m-high concrete pier supporting a uniform solid slab. It is highly representative of commonly used bridge/highway overpasses in Canada and Quebec. The ‎isolation system is designed for a period T = 2.0 (s) and the displacement capacity of the ‎isolator is 5.5 cm. Assuming the bridge is in Montreal, Canada, the hysteresis parameters, isolation system behaviours, and 3D bridge model are shown in Fig.1. 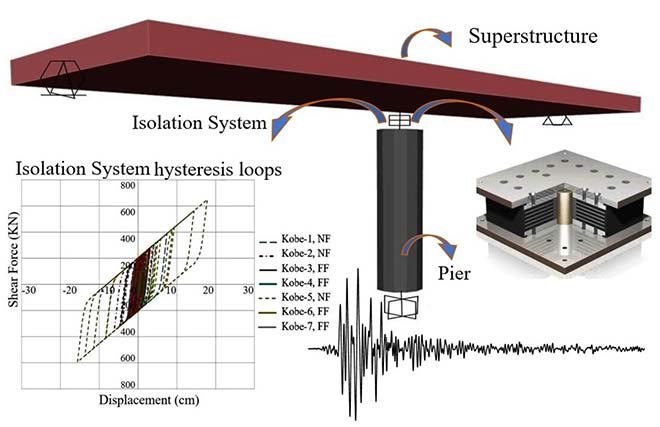 Nonlinear time history analyses (NTHAs) were conducted on the model, with selected ground motions and maximum seismic demands determined from the obtained time history responses. Results are ‎discussed in the following section‎.

The isolation hysteresis loops, obtained from NTHAs, are shown in Fig.2. They illustrate that ‎ isolator displacement and energy dissipation‏ ‏allocate the highest amounts on soft ‎soils and NF records. Dissipated energies within the hysteresis loops as well as ‎forces transmitted to the structure are higher for the mentioned condition. The maximum acceleration and isolation displacement responses for Kobe (Japan) records are presented in Fig.3. It is obvious that the seismic isolation has considerably reduced the seismic acceleration ‎forces by a factor of up to 10 on stiff soils while this factor is only 2 on soft soils ‎for FF records. This shows that seismic isolation efficiency may be considerably altered in the presence of soft soils.‎

Seismic responses of an isolated bridge subjected to NF and FF records on different ‎soils computed by NTHAs were compared and the following tendencies were obtained:

‎‎1- In the case of NF records, all mentioned seismic responses were amplified for isolated and conventional bridges. These ‎increasing tendencies were more severe on soft soils and this effect should be considered at the ‎design steps for bridges under such circumstances.‎

‎2- In the case of isolated bridges, NF records and soft soils lead to higher demands in terms of displacements. Ignoring this issue during the design phase leads to a significant underestimation and possible failure of the isolation system and the bridge ‎during a strong NF earthquake on soft soil sites.‎

‎3- On soft soils, the level of reduction in acceleration responses of the isolated bridge was limited. It shows that seismic isolation is more efficient for firm or rock soils than soft soils. Careful attention and ‎scrutiny are required in designing these technologies, depending on the structure’s distance from active faults and the type of soil.

Nastaran Cheshmehkaboodi is a Ph.D. candidate in the Department of Construction Engineering at ÉTS. Her research interests include seismic design and infrastructure analysis, base isolation technologies and structural analysis.

Lotfi Guizani is a professor in the Department of Construction Engineering at ÉTS. His expertise includes the structural analysis of concrete, steel, and timber structures. 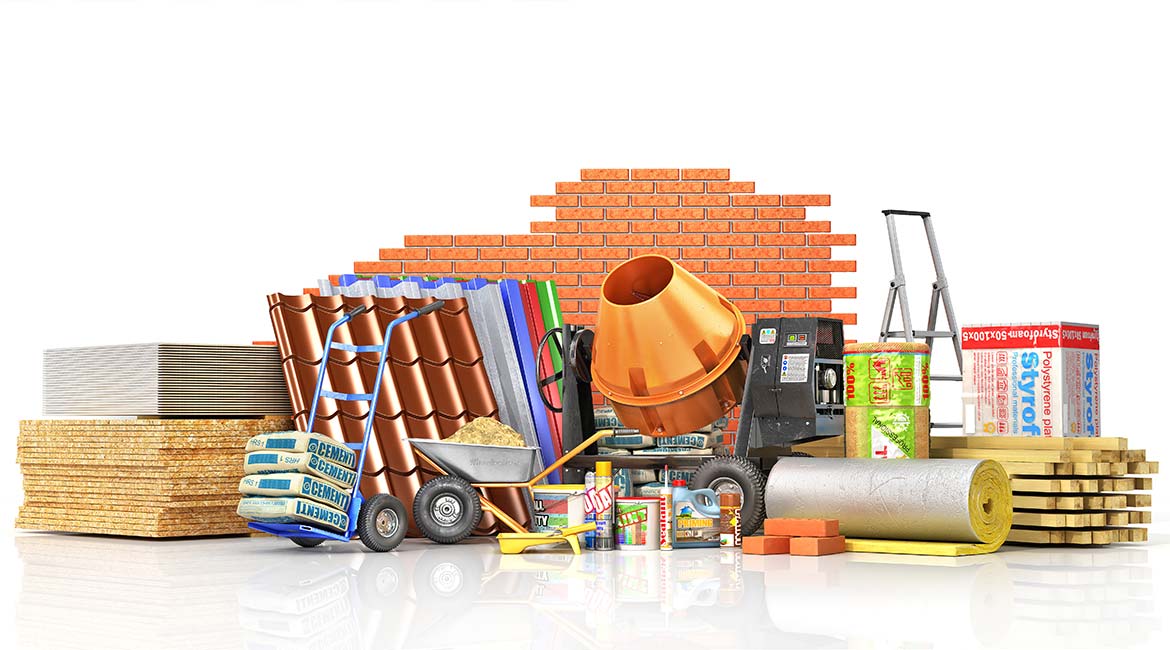 24 May - Infrastructure and the Built Environment

A Method to Identify Design Flaws in Steel Construction Projects 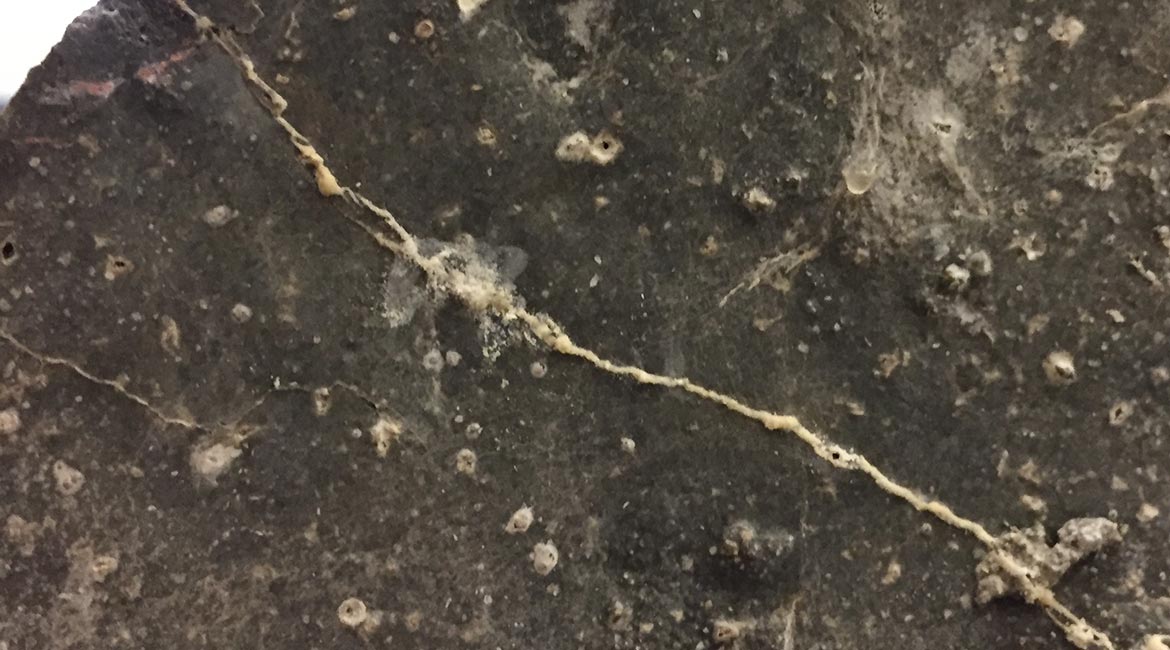