Impact of Solar Flares on Life – The Sun - By : Jonathan Landry,

Impact of Solar Flares on Life – The Sun 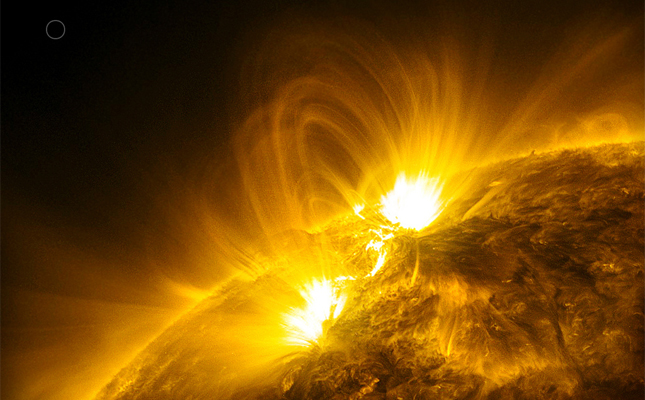 “Space weather destroys stuff”: A powerful statement, yet poorly understood in society. Only recently have researchers begun to reveal some of the forces that underlie the Sun’s behavior. And what they are finding is both spectacular and frightening. We have learned that the Sun is not always our best friend. Study of the 1859 Carrington event has shown that large explosions on the solar surface can have devastating effects on life on Earth. This article (parts 1 and 2) is a summary of the first chapter from SolarMAX: a space weather survival guide, a team project (SSP13) of the International Space University (ISU).

Most solar events do not reach our planet or are not strong enough to damage human infrastructure or life itself; however, in some rare instances this is not the case. Thus, we should study the physic that undergoes inside the sun and its impacts. 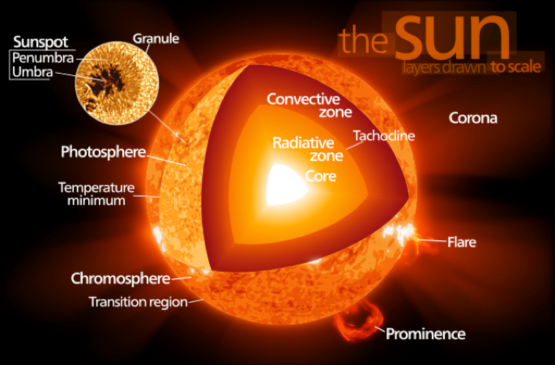 Fig. 1: Schematic view of the structure of the Sun. Source [Img1].

The Sun has many different layers that define its structure, as shown in figure 1, including the core, the radiative zone, the convective zone, the photosphere, the chromosphere, and the corona [1]. In the core, the density is as high as 150 g/cm3 and the temperature is over 15 million K—hot enough to fuse hydrogen. At the other extreme, near the base of the corona, the density drops to 1 x 10-15 g/cm3 [2]. Moving away from the heat-producing core, the temperature drops to about 6000 K at the photosphere, the surface of The Sun. The temperature then rises again to more than 2 million K in the corona, which is the furthest layer from the core, a phenomenon that scientists have not yet been able to satisfactorily explain.

All matter in The Sun is in the form of “plasma”— gas that has been ionized by high temperatures. This makes it possible for The Sun to rotate faster at its equator (about 25 days per rotation) than it does at higher latitudes (about 35 days near its poles). This effect is known as “differential rotation.” Plasma is made up of charged particles, so moving plasma generates a magnetic field through a dynamo effect. One can imagine this magnetic field as consisting of a series of invisible lines, running between two poles. Charged particles in the Sun’s corona move along these field lines, forming the solar wind [3]. 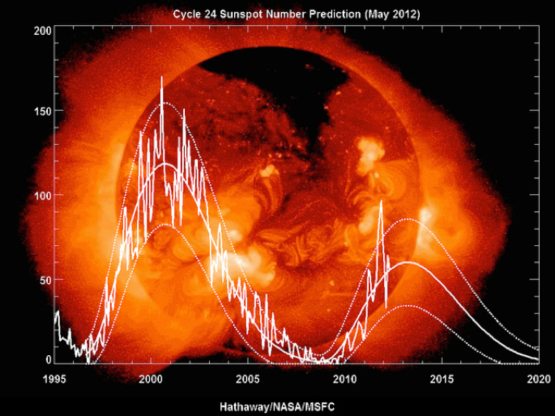 From Sunspots to Solar Flares

Within The Sun’s convective layer, strong magnetic fields are carried through cylindrical channels known as “magnetic flux tubes.” Sunspots occur when these tubes get twisted by differential rotation and intersect with the photosphere (figure 2). Charged particles caught in this magnetic field have difficulty moving from one field line to another, so convection—and therefore heat circulation—is inhibited, resulting in the sunspot being both colder and darker than the surrounding area. Sunspots have magnetic fields with strengths around 2000-4000 Gauss (much stronger than that of the Sun itself) and occur in pairs, with each spot serving as one pole of a magnet. Sunspots usually last for a few days, with particularly large sunspots lasting up to several weeks. Because of their powerful magnetic fields, sunspots are associated with solar flares and coronal mass ejections or “CMEs” [4]. 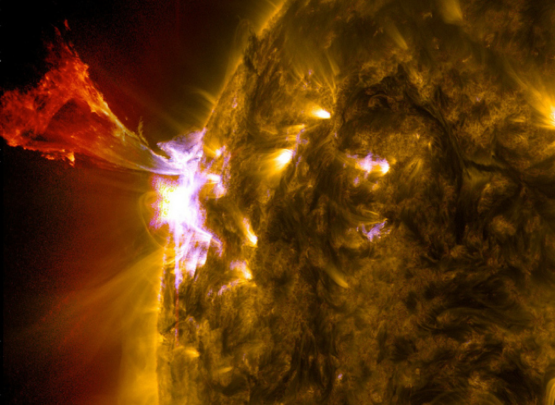 Picture 1: A burst of solar material leaps off the left side of the sun in what’s known as a prominence eruption. This image combines three images from NASA’s Solar Dynamics Observatory captured on May 3, 2013, at 1:45 pm EDT, just as an M-class solar flare from the same region was subsiding. The images include light from the 131, 171 and 304 Angstrom wavelengths. Source [Img3].

Magnetic fields in the Sun’s corona also contain large amounts of energy. When field lines reconnect, some of this energy gets released in the form of a huge explosion known as a “solar flare”, (picture 1) consisting of gamma rays, x-rays, protons, and electrons [5]. In terms of sheer power, not even solar flares can hold a candle to “coronal mass ejections” (CMEs), which are the single most energetic events in the Solar System. CMEs occur when huge bubbles of plasma and magnetic field lines are ejected from the Sun over the course of several hours. While they are frequently associated with solar flares, CMEs have also been known to happen on their own [5]. Both solar flares and CMEs can cause serious problems for humanity if they happen to be pointed towards Earth [6].

It takes about two to three days for CMEs to reach the magnetosphere of the Earth, where they may trigger spectacular and potentially destructive “geomagnetic storms.” CMEs can happen at any time over the solar cycle, but tend to happen more often during solar maximum. At solar maximum, the number of major CMEs observed at the Sun is about three per day [6], but some weaker CMEs are also observed using space-based instruments [7]. The number of shockwaves detected near the Earth, however, is about 0.3 per day, meaning that only one tenth of CMEs reach us [8]. The CMEs interact with the Earth’s magnetosphere through magneto-hydrodynamic interactions as shown in the below video. These interactions are known as “geomagnetic storms.”

We invite you to read the second part of this article titled Impact of Solar flares on life – Effects on Earth to be published soon.

The author as part of SolarMax team wishes to express its sincere gratitude to all at ISU who helped us wrote the report in less than one month. We would like to thank our chairs Dr. Simon Pete Worden and Dr. Rogan Shimmin of NASA Ames, as well as our tireless and always optimistic Teaching Associate David Haslam.

Jonathan Landry is a master student in aerospace at ÉTS de Montréal. His thesis consists in developing a finite element software able to solve multiphysics problem with moving-mesh algorithms.