Impact of Carbonation on Stabilized and Solidified Matrices 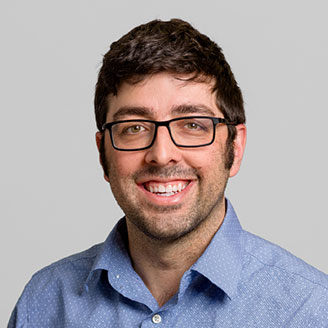 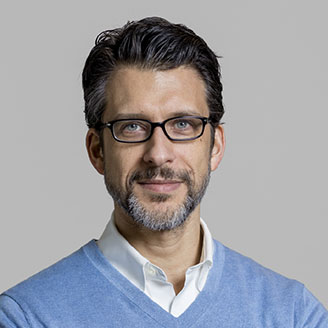 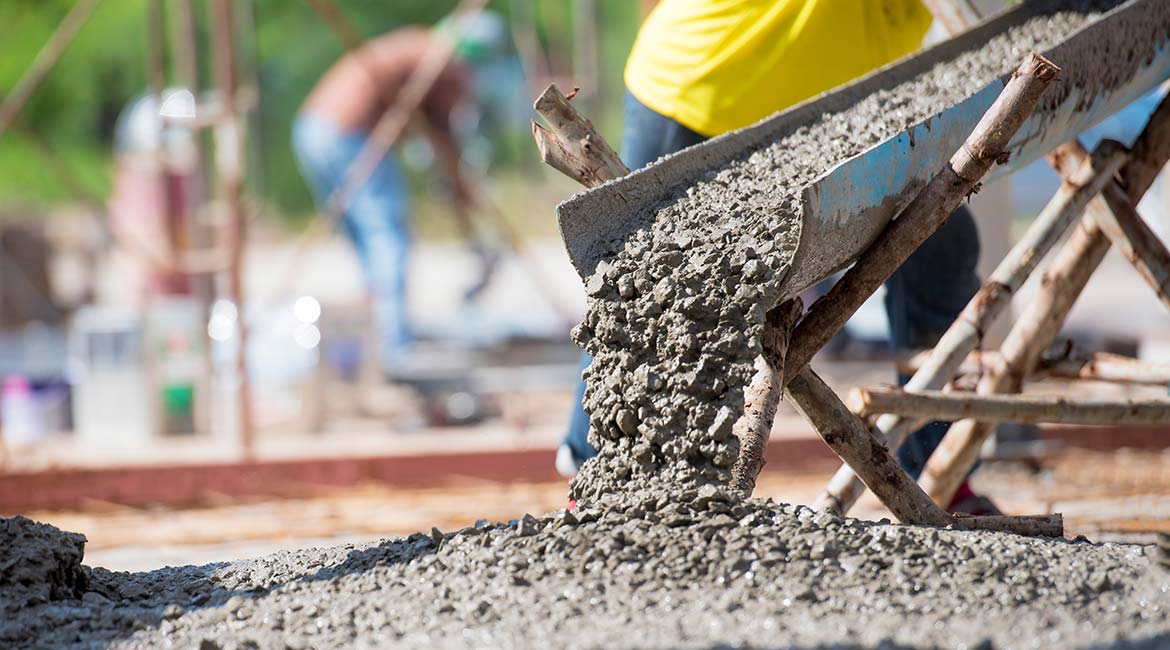 The main objective of this study was to determine the impact of carbonation, the reaction of atmospheric CO2 with the cementitious matrix, on the solubility of lead (Pb) and on the chemical and mineralogical properties of stabilized and solidified (S/S) matrices using thermogravimetric analysis. Batch leaching tests, based on thermodynamic equilibrium, were used to evaluate the leaching of this inorganic contaminant as a function of pH. The results showed that lead was retained in the S/S soil to a higher degree after carbonation. They also showed the complete and partial transformation of portlandite and C-S-H respectively to calcium carbonate due to carbonation.

The Stabilization/Solidification (S/S) technique, a non-destructive remediation technique, has been broadly applied since the 1970s for the treatment of hazardous wastes [1]. This technique consists in using a hydraulic binder, usually ordinary Portland cement, to transform contaminated soil into a solid (monolith) with good structural and physical integrity (solidification) and convert contaminants chemically into less soluble and less mobile forms (stabilization) [2]. It prevents the migration of contaminants into the environment by reducing their mobility. It is also quite economical for use with large volumes of waste.

Although the short-term effectiveness of this technique has been proven, long-term durability of monoliths can be affected by physical and chemical weathering phenomena such as freeze/thaw, wetting/drying cycles, acid rain and atmospheric carbonation [3; 4].  Carbonation, caused by atmospheric carbon dioxide, is the most common chemical alteration of cementitious materials in the environment [5]. During carbonation, portlandite (Ca(OH)2) later referred to as CH and calcium silicate hydrate (C-S-H)—the principal hydration products of cement (Deschamps et al., 2006)—are transformed into calcium carbonate (CaCO3) later referred to as CC.

Lead release in S/S material as a function of pH

Stabilized/solidified matrix containing lead oxide (PbO) was produced for this study. It was prepared by mixing cement (20%), water (14%), sand (63%) and oxide powders (3%) with a constant Water/Cement ratio (W/C) of 0.7. After demolding, the S/S material was cured at high relative humidity for 28 days. A laboratory method was developed to speed up carbonation, while maintaining stable experimental conditions. The accelerated carbonation consisted in introducing a mixture of air and CO2 (30 %) into a series of columns containing the S/S aggregates under constant humidity and temperature.

Figure 1 show the results for lead solubility as function of pH for non-carbonated (NC S/S PbM) and carbonated matrices (Carb S/S PbM) for 28 days (respectively filled and open circles in Fig. 1). Figure 1 also displays results for equilibrium water leaching tests after different periods of exposure to CO2 which are 0.5, 1, 3, 7, 14 and 28 days (triangles). Lead solubility around a neutral pH is low because of the formation of insoluble cerussite (Pb(CO3)) and hydrocerussite (Pb3(CO3)2(OH)2). On the other hand, lead is more soluble at very acidic and alkaline pH values because of cerussite and hydrocerussite dissolution. Indeed, as shown in Fig. 1, lead in solution reached 171 mg/L at the initial pH of the NC S/S PbM matrix (12.49) and 2809 mg/L at very acidic pH 0.74 going through a minimum of 0.158 mg/L at slightly alkaline pH 9.

As shown by the Carb S/S PbM curve, carbonation promoted the retention of lead in the monolith by decreasing its concentration in solution at acid and basic pH, and by widening the pH range (6-8) where lead is under insoluble forms. In fact, at the initial pH of the carbonated material (10.66), the lead concentration (0.3 mg/L) was 570 times lower than at the initial pH of the non-carbonated matrix. Around pH 6, the lead concentration in the leachate was 0.7 mg/L for the Carb S/S PbM matrix and 1000 mg/L for the NC S/S PbM matrix. This reduction continued until pH 2.5 where both curves met. 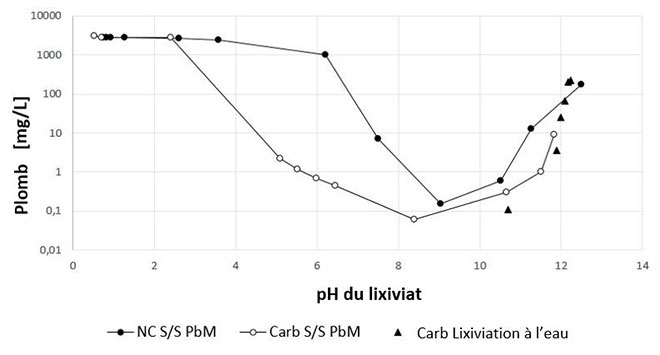 Thermogravimetric analyses (TGA) allowed the evolution of carbonation over time to be monitored by quantifying the cement phases after hydration and the calcium carbonate present in the monolith after different contact times. The TGA and TGD (thermogravimetric derivative) curves correspond respectively to the cumulative mass loss of S/S material phases and the temperature derivative of this loss. The TGD curve highlights the inflection points that are associated with the decomposition of each mineral phase.

As shown in Fig. 2, the non-carbonated matrix was rich in cement hydrates (C-S-H, ettringite and CH). Mass losses of 4.5%, 2% and 1.45% were observed for the dehydration of C-S-H, ettringite and CH respectively. However, the mass loss associated with calcium carbonate decomposition was only 0.7%. Following carbonation (Fig. 3), the peak of mass loss for portlandite lowered to 0.3%. On the other hand, the calcium carbonate mass loss rose from 0.7% to 5.5%. 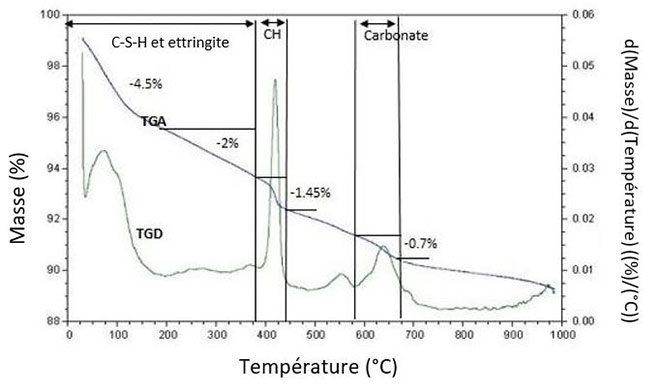 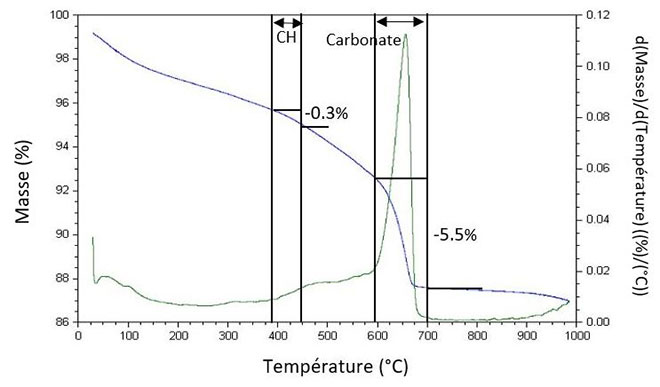 Carbonation acted positively on the lead-contaminated monolith by promoting the fixation of this pollutant in the solid, most likely because of the precipitation of lead carbonate, by decreasing its concentration in solution at acid and basic pH, and by widening the pH range (6-8) where lead is under insoluble forms.

Thermogravimetric analyses (TGA) proved that the matrix became gradually depleted of portlandite during the 28 days of carbonation until exhaustion, and enriched in calcium carbonate, thus indicating the total transformation of this hydrate to calcite. Participation of C-S-H in producing this mineral has also been proven.

Our study has shown that carbonation causes a detrimental change in the mineralogy of soils treated with S/S that can affect their resistance. This phenomenon had a positive effect on the retention of lead.

For more information on this research, please see the following papers:

Sarra El Bedoui, François Duhaime, Jean-Sébastien Dubé. 2017. “Influence of carbonation on the release of arsenic and lead and on chemical and mineralogical properties of cementitious matrices”. GeoOttawa 2017: 70 years of Canadian Geotechnics and Geoscience (Ottawa, ON, Canada, Oct. 01-04, 2017).

Sarra El Bedoui is a PhD student in Environmental Engineering (Department of Construction Engineering) at ÉTS. She is conducting research on the treatment of heavy metal contaminated soils using the stabilization/solidification technique.

François Duhaime is a professor of geotechnics in the Department of Construction Engineering at ÉTS.

Jean-Sébastien Dubé is a professor in the Department of Construction Engineering at ÉTS.